We promised a slower pace and we succeeded. We started out the day at the Pony Express Station in Gothenburg, Nebraska. Originally erected in 1854 four miles east of Fort McPherson the station has been used as a Pony Express Station, a Overland Trail Stage Station, a Dwelling Bunk House and a Storage House. In 1931 it was restored by Gothenburg Post 64 , American Legion, being dedicated to all Pioneers who passed this way to win and hold the West.

The first Pony Express trip from St. Joseph to San Francisco took nine days 23 hours, nearly half the time of the fastest stagecoach. 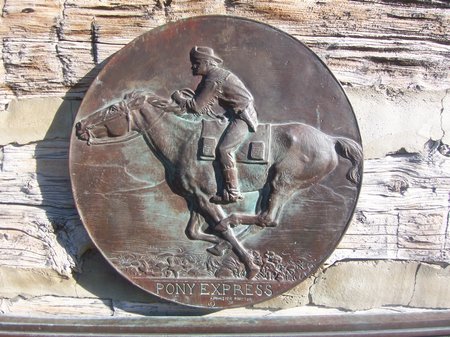 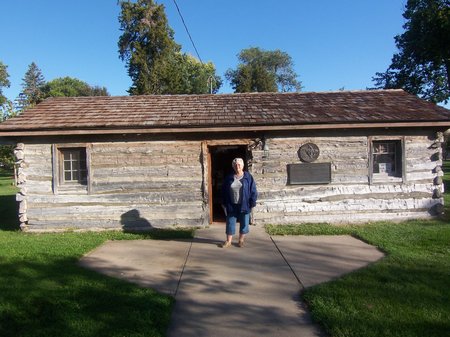 The buffalo pictured below is made from 4 1/2 miles of barbed wire. It was out behind the Sod House Museum that was closed for the season. 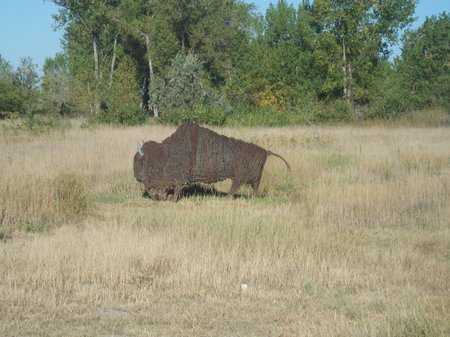 Since we were slowing the pace, we left I80 and followed the Lincoln Highway Route 30 through the western half of Nebraska. The road is well maintained, has wide shoulders, and very little traffic. We were never passed by a truck or car. The scenery is the same as out on 80, but you get a few small towns to see. We felt that there is a reason a TCT Caravan would not get much support from folks along the Lincoln Highway. Economically, the towns appeared pretty depressed. Maybe things will perk up for the Anniversary Celebration in 2013.

Our next stop was a Buffalo Bill’s ranch – Scout’s Rest – which became a state historical park in 1965. Everything was beautifully maintained and nicely displayed. The North Platte home was built during his famous Wild West Show heyday, when it appeared he was rolling in the dough. The original home was built for $3,900 in 1886. 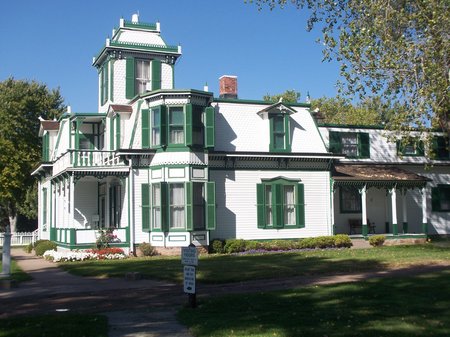 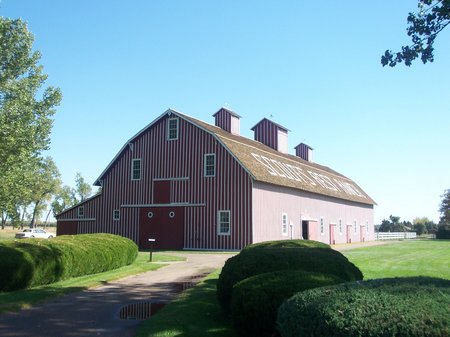 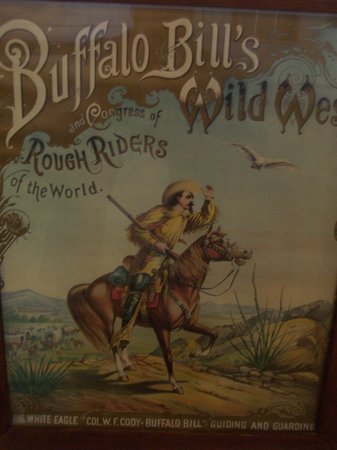 While touring the grounds we spied a red fox trying to move across a bridge, but the sight of a ground’s keeper turned him/her around and back into a thicket.

While on Route 30 we did see a wolf, but unfortunately it was road kill. A big beautiful animal.

At first we bypassed Sidney Nebraska and Cabela’s, but we decided to go to Cheyenne tomorrow, exited at the next exit and headed back to Cabela’s. This location is the company headquarters and has a full service campground. Nice campsite that is walking distance to the store. I have been trying to get Jeri into Gore Tex for a long time. Wild Plum is the color and Jeri will love it the next time it rains. It took me 30 years of coaching football, spending many nights in the rain to smarten up and by a full suit with a pair of waterproof shoes. Now even if you were getting beat on a Friday night, you were at least dry.

Weather was great during the day and is even better as we sit out on the picnic table typing this. We listened to CNN most of the day to see what was going on with the bailout/rescue plan. A lot of hype for the debate, also.

Some ominous clouds on the horizon.