Thanks to Terry, you will have a few links to help clarify or serve as a link to some of the places visited.

Forgot to mention how nice it is to have the air card for the computer. We were able to sit out at the picnic table at the Cabela’s campground and listen to the VP debate. I read that it had a much larger listening/viewing audience than the Presidential debate. Two different campgrounds had free WIFI, but neither worked properly. The KOA office staff in Salt Lake City apologized for the service as she was giving me the info about it. She recommended that we come up to the recreation room to use the service. No thanks, I can sit at the table in the Avion and do just fine.

Jeri woke me up last night to let me know that she heard water leaking. The leak was more like someone pressure washing the side of the Avion. There was a warning in the campground material that the water pressure was 100 psi or something like that. I have always used the pressure reducer for the water as it enters the trailer. Knew this was a good idea after the water pressure at a campground in Vermont, blew a water tank seam in a recently purchased vintage Airstream Bambi. I learned from that and have had the valves securely screwed into the water intake. Little did I know that the pressure would blow a hole in the hose. There was a kink spot where the hose never coiled up properly and that is were it blew.

We had less than 100 miles to travel today to get to Salt Lake City. Now I know where the Wyoming money goes. We passed through one of the ski areas and saw all the condos that just get used during the ski season. The drop down from the Utah line to Salt Lake City was a gas saver – a 5 to 8 percent grade . Had the spots to check brakes before descending and a turnout for the runaway trucks. 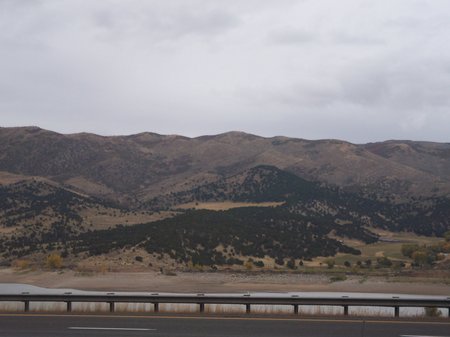 Rain is expected today and tomorrow with even a prediction of snow in the higher elevations, so we will have to see how many of the sights we get to see. The Latter Day Saints semi-annual General Conference started today and continues through Sunday, so it is very congested in the areas we would like to visit. They cancelled the shuttle from the KOA to the downtown area because of the conference. 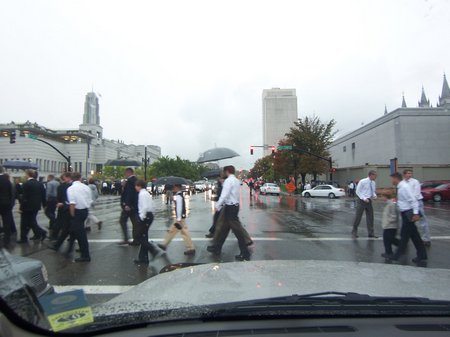 OK the picture doesn’t look like it is too crowded, but we missed the main mass walking across heading for the conference center. Black suits and white shirts were the standard dress. The exception was a couple of ladies in brightly colored dresses that were a real contrast. Hundreds of men and a couple of women. Maybe they have their own meetings to attend.

This KOA has a VIP section for long term stays. Guess what we found? 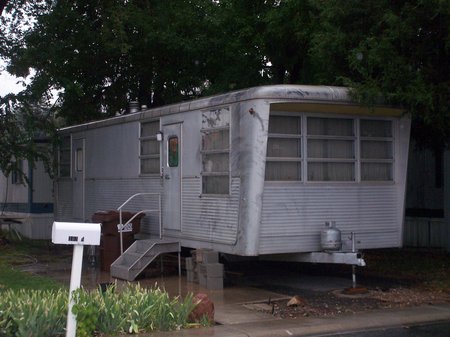 A just the right size Spartan Villa. This was Spartan’s last attempt to stay afloat. I believe by the early 60’s they were being produced somewhere in Alabama. Jeri and I visited Tulsa and the home of Spartan in 1996. It was an aeronautics school then and the staff didn’t know much about the trailer history. They did bring in an older maintenance man and he was the keeper of the steno book. He use the book to record the contact information of anyone that called or inquired about the trailer history. The one piece of info that I remember well is that there was a time in the 50’s that larger numbers of the trailers were shipped to the Middle East for use in the oil fields. The Spartan Aircraft Company was owned by oil man, John Paul Getty .

We were going to try and take in a movie tonight, but Jeri is still hacking a bit and didn’t want to disturb anyone, so we will pick one of the DVDs we brought with us. We don’t travel with a TV , so our entertainment options are a bit limited.

I received an answer on the Tire Question. Thanks to Doreen Bergman for the following:

“Many of the tires that you see on the roof..are placed over the gas furnace-hot water vents..The tire helps to prevent the wind blowing across, from drawing the pilot lights out. Also as others have said..it does put a additional weight on some of the metal roofs..making them quieter..Metal roofs on any buildings expand & contract with changes in temperature..Trailer roofs are especially vulnerable..because of their shape & insulation that is in very close proximity of the roof itself.”