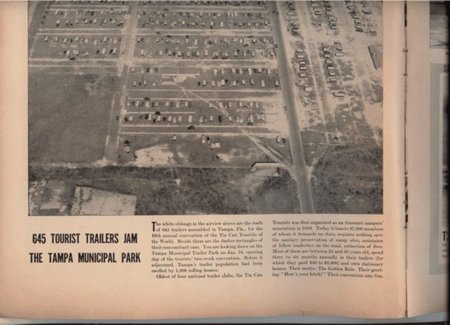 The white oblongs in the airview above are the roofs of 645 trailers assembled in Tampa, Fla., for the 19th annual convention of the Tin Can Tourists of the World. Beside them are the darker rectangles of their concomitant cares. You are looking down on the Tampa Municipal Trailer Park on Jan. 16, opening day of the tourists’ two-week convention. Before it adjourned, Tampa’s trailer population had been swelled by 1,200 rolling homes.

Oldest of the four national trailer clubs, the Tin Can tourists was first organized as an itinerant campers’ association in 1919. Today it boasts 97,000 members of who it demands no dues, requires nothing save the sanitary preservation of the camp sites, assistance of fellow trailerites on the road, extinction of fires. Most of them are between 35 and 50 years old, spend three to six months annually in their trailers (for which they paid $50 to $3,000) and own stationary homes. Their motto: The Golden Rule. Their greeting: “How’s your hitch?” Their convention aim: fun.