The bidding war on the Bowlus Road Chief trailer was one of the liveliest at the Gooding auction exceeding their estimate. Final price with buyer’s commission – $187,000!

And to think that the TCT had a couple of these as our feature trailer at one of our recent rallies!

That price is considered a A world auction record for a Bowlus trailer, the 1935 Bowlus Road Chief at $187,000

Gooding and Company, an automotive auction house based in Santa Monica, had estimated the value of the Road Chief at $75,000 to $125,000, but it is was auctioned without reserve. Included with the trailer were items from the 1930s, including a Bowlus sales brochure and a 1936 issue of Travel Trailer magazine with a Road Chief on the cover.

Some information on the trailer 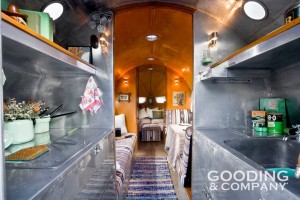