Skip to content
It was an exceptional Tin Can Tourist Rally at Sampson State Park, located in the Finger Lake Region of New York. The Fourth Annual Tin Can Tourist 2011 Northeast Rally not only had a full house in the campgrounds, but we also had a record breaking number of visitors at our Open House. There were no fewer than 23 different makes of trailers out of a total of 52 units.  Members came from seven different states to share their love and interest for vintage trailers and motor coaches.
Bill and Denise Fletcher hosted this year’s Rally and once again pulled together an extended weekend full of vintage campers, good food, great friendships, musical entertainment, displays and presentations. There was a perfect balance between attending TCT related information sessions, community meals and talking to fellow campers about their rigs. Some of the main events this weekend included a mac-cheese and chili cook-off, dish-to-pass/pig roast and music by honky-tonk band, Family Tradition.
This year’s awards for top trailers and motor coaches went to the following proud owners.
First
1957 Deville belonging to Rich and Sure Luke of Schenectady, NY
Second
1960 Shasta belonging to Mike and Kathy Marshall of Rochester, NY
Honorable Mention
1965 Ford Falcon Travel Wagon belonging to Mark and Heidi Oros of Trumansburg, NY
The majority of 150+ people attending Saturday’s Open House appeared to be responding to an article published in “Life in the Finger Lakes” magazine.  It is always a pleasure to see newcomers’ wide-eyed enthusiasm for vintage camping and know that the Tin Can Tourist bug will bite some of them and next year they will be back as members with their own vintage rigs. The article that attracted people can be seen online at http://digital.turn-page.com/issue/38926/55.
This year we had a very special vintage trailer on display that we call “The Graton,” named after it’s builder, Milton Graton. Graton, a master bridgewright from Ashland, NH, was known as “the last covered bridge builder in New England.” It was built in 1935 and used by the Graton family for vacations until the late 1940’s when it was used as an office for their business. “The Graton” was retired to inside storage in 1951 or 1952. The trailer was constructed of wood with masonite sides and a canvas roof. The axle came from an early Chrysler car. The interior features running water, a separate bathroom with toilet, a two-burner propane cook stove, an ice box, electric lights and a bucket-a-day coal stove that also heated the water. The trailer was donated to TCT by Milton’s son, Arnold Graton.
Volunteers, such as Hunt and Susan Jones, remind us in both words and actions that it is the special volunteer effort that we put into our TCT community that makes it so worthwhile.  Special thanks go to:
Steve Hingtgen, from Vintage Trailer Supply, for his generous donation of door prizes and his continued support of TCT.
Jason Bailey for the BBQ delights he cooked on his hand-forged cooker/smoker, aptly named “Boss Hog.”
Jeff Honig for taking this year’s photographs.
Hunt Jones for his lecture, “Home away from Home,” a history of where auto tourists have stayed while on the road.
Whether vintage touring is a lifestyle or a one weekend a year hobby, please let Bill and Denise know that you are willing and able to help out at next year’s rally in the beautiful Finger Lakes Region of New York State.
The Graton trailer. 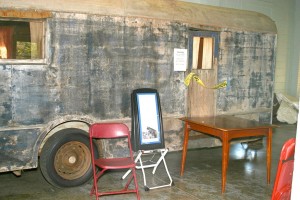 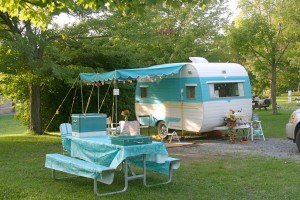 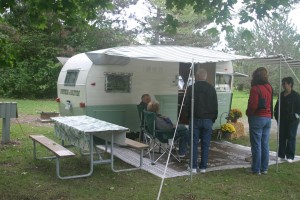 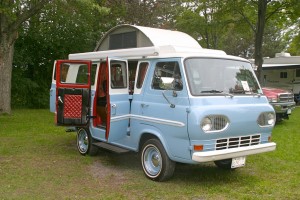 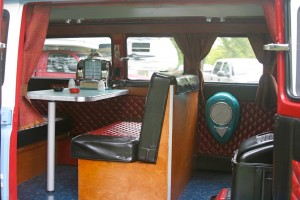 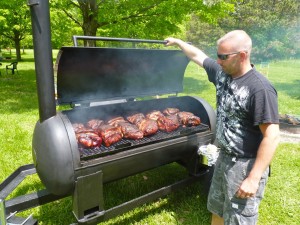