Tin Can Tourists Rally At Sampson 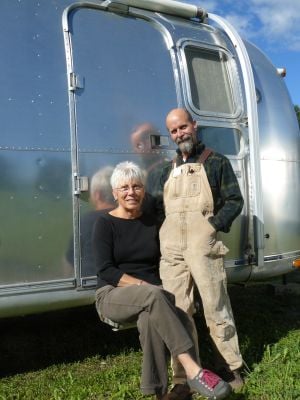 Bill and Denise Fletcher of Fletcher Trailer Sales and Service will be on-hand during the sixth annual Tin Can Tourists Northeast Rally at Sampson State Park this weekend. The public will have a chance to check out roughly 70 vintage campers and trailers from around the northeast during a free showing from 11 a.m. to 3 p.m. Saturday, Sept. 14.

The road trip is every part of the American experience now as it was decades ago. Though the lure of the road will continue to entice millions of travelers to venture into America’s great unknowns, the means in which to do so has lost a touch of what Bill Fletcher calls “soul”.

Sure, those big white-box RVs and campers are pretty sweet these days, with multiple extensions and tricked out lounges outfitted with enough gadgets and gizmos to rival the swankiest bachelor pad. All for $75,000 a pop. But, as Fletcher said, there’s a romantic element to the old throwback campers that can’t be replaced with Wi-fi and flat-screen televisions.

What he finds intriguing about vintage campers is “the uniqueness of them,” the Trumansburg resident said. “Back then, they had real character and soul.”

Fletcher, of course, is the owner of Fletcher Trailer Sales and Service, which specializes in rescuing vintage campers worn by both the road and time, like the Shastas, Spartans and, of course, the unmistakable silver Airstreams.

Parked in the lot of Fletcher’s route 227 headquarters are the ailing trailers that await his restorative hands. Fletcher calls himself a “nuts and bolts” restorer, meaning his focus is more on repairing exterior issues, like a bent chassis or rusted suspension. A family business since 1963, Fletcher’s has carved out a sizable niche in the vintage camper market, shipping parts and restoring old campers for customers across the country and the globe.

“We shipped our sixth trailer overseas this year,” he said.

When it comes to his affinity for vintage campers, Fletcher is not alone. This weekend, throwback RV and trailer aficionados known as the Tin Can Tourists will pull into Sampson State Park in Romulus and set down temporary stakes for the sixth annual Tin Can Tourist Northeast Rally. Some 60 to 70 vintage trailers of all makes and models will take part in the rally, Fletcher said, with models from as far back as the 1950s up to more modern varieties. As part of the event, from 11 a.m. to 3 p.m. Saturday, Sept. 14, the Tin Can Tourists will open their vintage trailers up to the public during a free showing at the park (admission into Sampson Park is free for the duration of the season, a park employee said Friday).

“Anybody that appreciates things from the past can certainly appreciate the quality of old trailers,” said Fletcher, who, along with his wife, Denise, served as the Tin Can Tourist’s northeast representative for five years. The Fletchers will be on-hand this weekend.

“You make lifelong friends at these events,” he said.

The Tin Can Tourists put rubber to the road almost a century ago, in 1919, organizing as a fraternal group to unite “all auto campers”. Having once been deemed a recreation of the rich, auto camping took off with the introduction of Henry Ford’s affordable Model T in 1909. Still years before the arrival of the country’s first motel, America’s early roadtrippers would simply camp on the side of the road, heating tin cans of food over gasoline stoves. Naturally, communion among travelers was common, and out of that bred the Tin Can Tourists and its principles of wholesome fun, friendliness and clean camps. Members were inducted by fellow campers, only after an initiation process that included a secret handshake, sign, password and singing of the official song, “The More We Get Together”. Membership swelled in the 1920s and 1930s but tailed in the coming years, as the U.S. economy dipped in the late 1930s, slowing automobile production, and the country prepared for World War II. Add to the changing political and economic climate a new competing group – the Automobile Tourists Association, which arrived as division began to shake up the ranks of the Tin Can Tourists. The ATA billed itself as a more dignified version of the Tin Can Tourists – ATA leadership thought the term “tin can tourist” was borderline offensive — and touted its brand to not only auto campers but any and all tourists.

These combined factors thinned the Tin Can Tourists membership in the coming decades, and by the 1980s, the Tin Cans were officially out of gas and defunct.

Not until the late 1990s did Forrest and Jeri Bone jumpstart the Tin Cans, rebilling the group as a vintage trailer and motor coach club. Today, the Tin Can Tourists have membership of around 1,500 vehicles and is open to all. They hold annual gatherings in Michigan – “The big one”, as Fletcher says – Florida and various regional locations, like this week’s rally at Sampson State Park.

Back in his garage, Fletcher shows off his 1972 Avion camper, which he and Denise take up to the Adirondacks each year, an annual tradition during their 27 years of marriage. As regional representatives for the past half-decade, the Fletchers typically coordinated the Sampson event. However, this year, having relinquished their regional rep title, they will relish in kicking back and enjoying the rally for what it is and what it always was: camaraderie among America’s road warriors.