At 6:30am I loaded up all my stuff and headed a few blocks away to my grandparents place. They will be tagging along with me and allowing me to drive their Motorhome (they are TCT Members too and love to attend the rallies) Although they have never owned a vintage trailer, they have owned MANY new trailers that would be considered vintage today….their first was a 1954 Continental Trailer 35’.

By 7:30am we were all set to hit the road. Felt a bit weird at first, I am used to driving a shorter vehicle with a longer trailer in tow, this time I have a 30’ tow vehicle and a 13’ trailer in tow….I feel backwards! But quickly got used to how the motorhome handled. Starting off traffic was a little heavy out of Panama City as this weekend starts our Spring Break Season, and traffic was already quite a bit heavier than usual, but thankfully it was all incoming traffic and we were heading out of town.

About 120 miles down the road the motor home started to shutter and it felt like a tire was getting ready to blow. So I pulled off at the first exit off I-10 and of course as my luck would have it we were in the middle of nowhere right outside of Madison FL. The only thing at the exit was a gas station, but it was better than the side of the highway. Got out of the rig and looked around but saw no signs of tire trouble, so after driving around the station thought it may have been the road. As soon as we got back on the road and before getting back on the interstate it started again so I did a U Turn….all 43’ of us in the median and headed back to the gas station. Called the road side service and they my cell phone was cutting in and out really bad being out in the middle of nowhere, I had to climb up the rear ladder and get on the roof of the motorhome…..just like Robin Williams in the movie ‘RV’ And as if that was not a sight for all the people as the station, I always pace when I am on the phone, and didn’t realize until the call was over that I had been walking back and forth the length of the motor home for about 30 minutes!

Road side service said they would have someone out in about 20 minutes, which I was very happy with since usually it takes hours! Best of all after only 10 minutes the repair guy was there to change the inner rear dually with our spare. It didn’t take him long and he finished up the tire change and put the old tire on the back where the spare was located. He left and after eating a quick lunch we were ready to get back on the road 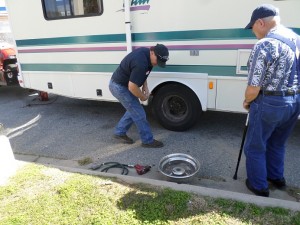 As soon as we got back on the road the same bouncing started. So again I made a tight U turn and headed back to the station.  Called road side service again and they asked how bad the bouncing was which I told them it was bouncing quite a bit, but not too bad. They asked if I could make it 7 miles to the next exit where there was a large tire and truck shop. So I told them we could make it and I would take it slow on the interstate, otherwise I would have been waiting for hours.  Got back on the interstate and finally made it the 7 miles at 35mph. After turning onto the exit I looked for the station but did not see it anywhere. Thankfully the lady on the phone gave me the stations number, so I called it and they informed me that they had not been at that location in over 2.5 years!!!! And they moved 50 more miles down the road. So I called road side service and told them what had happened and how aggravated I was at their outdated information.  The ‘new’ lady on the phone was very helpful and found another tire shop 6 miles down the road, but the good thing about it was I could travel on the exit road and not get back on the interstate. So off towards Madison FL to find the tire shop.

After circling the town about three times we finally found the tire shop. They looked at the rear tires and found an inner dually on the street side was bad, and the tread was warped. So they had a tire in stock and changed it out. Didn’t take them too long, and to find out the very first repair guy was from this same shop.  After the tire was installed we packed up and got ready to hit the road. Within a block of the tire shop (by the time we got up to speed) the rig was doing it again!!!! So we turned around and headed back.

The guys were surprised to see us back, but we told them what it was doing and upon inspecting the front two tires they found that they too were warped. So we asked them to put two new tires on the front. One problem…..they were out of tires for this rig and could get them delivered by morning! They owner told us to hold on and he would call and see if he could get any from town even though it was already 4:30 pm. Just our luck he located two tires and went to pick them up and his crew even stayed late to help make sure they were installed for us to get back on the road. 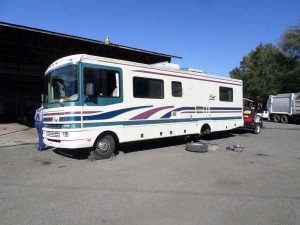 The tire guys told us that the make and model of tires on the rig had been recalled due to failure, it was an older recall and the tires have been on this rig for years already, so no wonder we were having all these problems. Unfortunately there were not enough tires to replace them all, but he told us to make sure to get them all changed (ones still not replaced) and he didn’t like the look of the two on the curbside, but they might make it the remaining 150 miles to Brooksville.

After the two front tires were installed we headed back out once more……this time there was no bouncing for once!!! Everything seemed to be fine. Even started to make good time on the highway.

BUT………………………… after getting on I-75 I could start to fell a slight shuttering/bouncing, so I slowed down a bit, hoping it was the road or at least that slowing down would help to make to Brooksville or at least to a place to pull over. About the time I turned to my Grandfather to tell him I thought another tire was going bad, there was a huge bang and I could fell the curbside of the rig lower. We had blown a tire, but at least it was an outer dually this time (a bit easier to change). This time there was no spare, so we called roadside service again. They told us they would find someone to come out and bring us a new tire. Took quite a while for them to call us back as they had a hard time finding a place opened after hours with the tire we need.

Within an hour the service truck arrived on site. 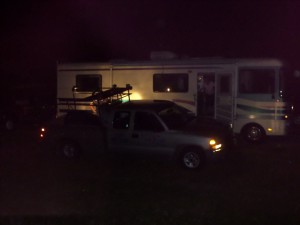 The guy was great, within 20 minutes he had the bad tire off the rim, new tire installed on the rim (by hand), installed on the rig, and had us ready for the road. We pulled out on the interstate and were ready to finish the last 120 miles of the trip. Thankfully the last leg of our trip was eventless and we finally made it to the campground by 11:30pm. We found a great spot right by a few friends and did a little bit of setting up before grabbing a very late dinner. I can’t believe it took us from 7:30am to 11:30pm to travel just 343 miles!  That’s an average of 21.5 miles per hour!!!! I could have made it faster by moped!!!!!