I slept very well last night after such a long day of travel and roadside tire problem on the way down. The rest of the family slept in, but I went ahead and got up for breakfast at the pavilion to see everyone who was still wondering if I had made it to the campground last night. Everyone was happy to see that we finally arrived in one piece last night. Breakfast was supplied by the youth ranch volunteers and it was great to have a big warm breakfast.

After breakfast we had a memorial service for John ‘Canner’ Culp, who had passed away earlier this year. John was the last of the true Tin Can Tourists having attended the original TCT Rallies in the 1930’s and 1940’s with his parents. John also lived full time in a 1947 Westcraft Trailer that he bought brand new with his father in 1947. John pulled it all over the US well into his 80’s when he finally retired from the road about 4 years ago and parked the trailer in central FL to live in. 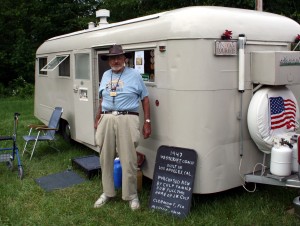 After the service we had the rest of the day to do whatever we wanted to do. I was happy to spend most of the day walking around and talking to everyone at the rally. Many of the TCTers at the event I had not seen in at least a year or more. We had some really great trailers attend this year, although many of our Airstream Friends were drawn away from our winter convention with an Airstream Rally in FL the same weekend, but we still had a good supply of vintage Airstreams at the event.

I eventually made it back to my rig and started to unpack all of the vintage parts I had packed to bring down with me to sell at the rally. I had four large tubs full of parts that I still needed to go through, price and layout on the utility trailer. I had also brought a lot of antiques for vintage trailers such as coffee pots, dishes, and even vintage clothing. Even sold a few items early as I was unpacking.

At 6 pm it was time for a pot luck dinner with chicken provided; there was a ton of side dishes including some awesome deserts.  When dinner was over we had a band providing a great selection of music. There was quite a bit of dancing as well with a couple of surprise fire dances from one of our fellow TCTers!!!! The music lasted well into the night, until we all could not stay up any longer and finally headed in for the night. Been a great day and can’t wait until tomorrow!