The morning arrived sooner than expected.  A frenzy of polishing, sweeping and staging ensued.  The judges met for a meeting at 9:45 and proceeded to their designated sites to begin the painstaking process of picking the winners.

Volunteers from 5 different charities arrived at 11am to set up for ticket sales.  All proceeds from the public open house were donated directly to those charities that sent volunteers.  We had an amazing turn out with some folks driving over 3 hours to come to the tour.  We sold over 600 tickets and raised over $3,000 for those charities that were working that day.  Tin Can Tourists made a huge impact on the Tybee Island Community and for that we are extremely proud.

At 6pm a vocal group specializing in 40’s 50’s and 60’s music arrived and began the entertainment.

Forrest Bone initiated all participants into the TCT family and lead us in the TCT song, sharing the handshake, secret sign and password.  We received our TCT pins and proudly wore them the rest of the night. 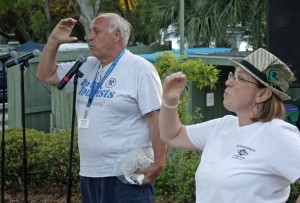 The group came back and continued their fantastic renditions of great vintage music while dinner was served.

After dinner the much awaited awards were announced followed by more music and celebrations.  There wasn’t a dry eye in the place when the group leader asked for a male volunteer to come up and help them with a song.  Sporting a leather jacket, an Elvis type head piece, Marv became the leader of the pack!  We promised him we wouldn’t share that photo but I couldn’t pass up the opportunity… we were all laughing!  There was lots of audience participation and everyone had a blast.

The evening concluded with a bit more music and dancing as our raffle winners were announced and door prizes were handed out.  Everyone went home with some great items. There were no late night campfires and comradery this evening as we were all exhausted and contemplating the journey home the next day.

On Sunday, we packed up and headed home most suffering from PRD (Post Rally Depression).   Until Next year folks!