Denis & Ginger Blaquiere, we are retired and live in Cape Coral, FL. We lived in Michigan most of our life but also have lived in Southern and Northern California and also North Carolina. Retired in August 2011 after a career in automotive design engineering and contract work for the department of defense. Ginger is a semi-retired pre-school teacher. We have three grown children, 30, 27 and 24 years old and three grandchildren, 5 and 2 years old and a newborn, 6 weeks old.

Tell us about your trailer and tow vehicle 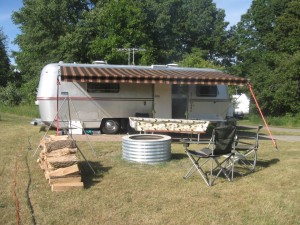 Where did you find your trailer?

The story of how we found our trailer is interesting. A good friend who I worked with in engineering shared an interest in camping with me. He was/is a tenter and has no interest in trailers. However, about 20 years ago when we first started working together he related to me that his mother and father bought some sort of  “aluminum trailer” when they had retired in 1975. The new price back then was about $13,000. They travelled all over the country with it until they were too old to travel anymore. This is where it gets interesting. In 1990 the trailer was parked at my friends “up north” house in Roscommon, Mi. His parents went into an old folks home for the remainder of their years. In 2007 a few years after his parents passed I asked him what happened to the trailer and he said it was still sitting in the woods but some guy offered him $2,000 for it as he wanted to use it as a hunting shack. I asked if Ginger and I could come see it before he decided what he was going to do. Now I had no idea what an Avion was or what it looked like. In April 2007 we took a ride up to Roscommon to check it out. Our first impression was “Oh crap, what a mess”. 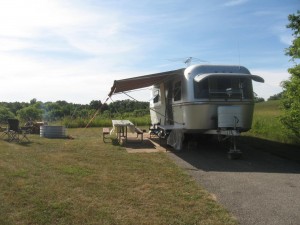 After looking past the filth we could see a diamond in the rough. It was like a time capseule back to the 70s. I asked John what he would take for it and he said “make me an offer”. I say “$1,800” and he says “sold”. He really wanted us to have it. After towing it home to Clarkston, Mi. we started the “restoration”. This is the honest to God truth, all we did was spend a long weekend cleaning the bloody thing inside and out. It cleaned up beautifully. I did put new tires and brakes on it since it is almost 40 years old.

What is unique about your trailer?

The thing we like about this rig is that it is built like a tank. It pulls really nice, no sway etc. We do not plan to ever “update” it as we like the original unrestored condition of the rig.

We like vintage trailers because they are just too “cool”. They are a window to our youth and a different era of craftsmanship. So much better than today’s stick and staple condos on wheels you see going down the road today. We really love the trailers from the 40s and 50s.

Where do you like to camp? Have you attended rallies?

Besides camping in numerous Michigan State Parks we have traveled to Va., N.C., Tenn., Florida Keys and many places in between. We have also attended three gatherings in Milford. In fact we won best reserve in show at the 14th annual gathering that Michelle Bone won best in show with her Avion. We were at Koreshan for 2013 and will be at Cedar Key in Dec. of this year. In Oct. of 2012 we were part of a “Vintage Village” display during the Good Sam Rally at Daytona Motor Speedway. This was at the invite of Al Hesselbart from the RV/MH Hall Of Fame. That was really interesting as we had never seen so many class “A” motorhomes in one place. The Vintage Village had an open house and I believe more people walked thru our rig in two days then had ever been in it in the previous 37 years ! What a zoo ! If all go as planned we will be attending a first ever Vintage Village in Hemet Ca. in late April 2015. It is being held at a “Luxury” RV resort there. We like rallies because they are fun and we always reconnect with old friends, make new friends and love checking out the trailers

What trailer clubs do you belong too?

Share with us something that not many people know about you

Besides loving old trailers we have been motorcyclists for 40+ years and have made numerous cross country trips. The most recent was to Mich. this last July 2014 for a wedding. We also scuba dive, are avid boaters and used to snow ski.  I am a former Marine Artilleryman and Vietnam Veteran. Besides being a pre-school teacher Ginger has been a professional cake decorator since her High School days. If you need a special Tin Can Tourists themed cake let her know.