Who are you and where are you from?

We’re Mike and Wendy Dager and we live in Simi Valley, California, a bedroom community in Ventura County, just a few miles northwest of Los Angeles County.  We’re California natives who grew up in the San Fernando Valley. We’ll be celebrating our thirtieth wedding anniversary – January 27, 2015—even though my parents warned Mike not to marry me!
Mike is a telecommunications contractor and a general contractor who is often working on household projects in his spare time. My friends wish we could clone him! I’m a professional freelance writer whose work includes a newspaper opinion column, magazine articles, advertorials, button slogans, greeting card copy, and humorous mystery novels. I’ve also been collecting and wearing vintage clothes, jewelry and accessories for more than 25 years, and am curator of The Vintage Purse Gallery, an online vintage handbag museum, featuring my collection of over 400 purses, accessories and ephemera. We have two grown daughters and a four-year-old grandson.

What trailer and tow vehicle do you own? 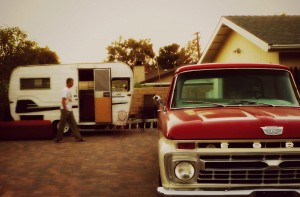 I’m currently working toward earning a certificate in Art Museum and Gallery Studies from CSU, East Bay (online). My final project is a feasibility study for the establishment of a vintage purse and fashion museum. After doing a lot of research, I realized this endeavor would be very costly, so I decided instead to revamp my online museum, plus supplement it with a mobile art installation consisting of a series of purse exhibits inside a vintage RV.
We went on a search for just the right RV–size-wise and cost-wise–eventually acquiring a 1961 Aristocrat Land Commander. After it’s restored, it will be towed by Mike’s 1966 red and white Ford F-100 to locations in and around the Los Angeles and Ventura County areas. It’s also towable by our motorhome, should we eventually be able to take the museum to a more distant location. It depends on our work schedules and family obligations. 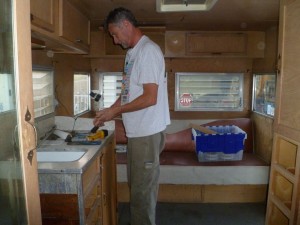 We spent a lot of time looking at online ads and soon learned that vintage RVs get snapped up pretty quickly. The Land Commander was only the second one we were able to see in person, so we decided to go for it because we knew if we spent too much time discussing it, it’d be gone. We bought it from a guy in Santa Paula, California, about thirty miles from where we live. He’d bought it for a relative as a temporary home, but the relative found other accommodations, so it was never cleaned or emptied out. It cost $1,300 and included a bunch of the previous owner’s possessions (not the guy we bought it from, but the guy he bought it from). We took out all the stuff inside, donating what we could and throwing away what wasn’t worth donating.
We also got an unexpected bonus: all of the trailer’s registration paperwork dating back to the original owners in 1961. They were from Ventura, California, so it was interesting to see that the trailer had stayed local all these years. We learned, too, that the medicine cabinet, which Mike removed, was handmade by another local man in 1962, who’d signed the back of it with his name, city and date.
The tow vehicle, Mike’s 1966 Ford F-100, is a recent acquisition as well. Earlier this year, Mike sold his 1928 Ford Model A hot rod and his 2010 Chevy truck so we could put a down payment on a nice used motorhome. He missed owning a vintage vehicle—we’ve always had at least one hanging around—so the F-100 was an inexpensive and really cool replacement for both the hot rod and the truck.

When and who did the restoration? 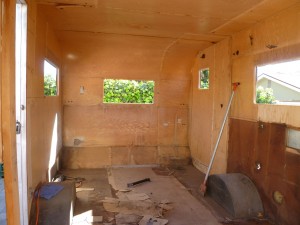 The RV is in the process of being restored by Mike and me, with Mike doing all the labor and us working together on the design process. We’re considering some unusual options since this isn’t an actual restoration for camping, but a mobile art gallery. For instance, we’re thinking of creating large double doors that swing out so visitors don’t have to enter the trailer, but can view it in its entirety, with the vintage purses behind Plexiglas. We’ll also add lighting, shelving, and signage, and plan to incorporate the original couch and Formica tables to keep that Mid-Century Modern vibe.
Several people have suggested that we make the trailer itself look like a purse—with folding handles on top—but I think that might be a little too much. We’ll probably do a somewhat traditional paint job, maybe with a wrap featuring a vintage-style pin-up girl holding a purse. This, of course, is a long way down the road (sorry, terrible pun). For more about the restoration, visit www.RVPurseMuseum.com.

What is unique or interesting about your trailer? 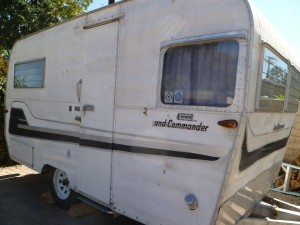 Using a vintage trailer to house a business is not in itself unusual—there are many old RVs that are mobile stores or food trucks—but, as far as I know, there aren’t any in use as art exhibits, so we’re excited about trying something new. We’re hoping to take it to vintage fashion expos, RV rallies, and businesses such as other museums, which will allow us to park it temporarily on their properties for viewing. We don’t plan to charge admission, but will use it to advertise The Vintage Purse Gallery website,www.VintagePurseGallery.com, which will also remain free to visitors. When we revamp the website–probably after the first of the year–we will add a store with vintage clothing and purse-related swag.

For me, what’s great about vintage trailers is they really appeal to my personal aesthetic, which is all about having a huge appreciation for vintage clothing. It’s so true that “they don’t make ‘em like they used to.” I have 1940s rayon dresses that are still in perfect condition, but my brand new department store cotton T-shirts fall apart after washing them a few times!  When I go on work assignments for the newspaper for which I freelance, I usually wear an embroidered or beaded vintage sweater with a pencil skirt. Whenever I go out just casually—to the supermarket and such—I always wear vintage jewelry and carry a vintage purse. Not everyone knows that my clothes and accessories are vintage, but I often get compliments on my style. I equate that to ownership of a vintage trailer. Not everyone is an RV aficionado, but they certainly appreciate the look, the style and the era. For Mike, I think it’s about the vintage vehicle aspect. We’ve owned a number of different vintage vehicles—him even before we got married, and then all throughout our married life together—so acquiring a 1961 trailer is a natural evolution of our combined admiration of vintage things.

Can you share an interesting bit of information that most people don’t know about yourself?

I was once named one of America’s Most Unique Characters by USA Network in its “Show Us Your Character” contest. Also, my novel I Murdered the PTA was a Court TV (now truTV) top five finalist in its Search for the Next Great Crime Writer contest.  And I have no idea what my real hair color is because I have a habit of dyeing it about every two weeks, sometimes purple or pink.  And now you know why my parents tried to talk Mike out of marrying me!

I think I may have over-shared! But if you have any questions, let me know (wdager@sbcglobal.net)