Chris Brown and Molly Bacon. We are married, but I decided not to change my name and deal with being called “The Unsinkable Molly Brown.” Dealing with “Good Golly Miss Molly” has been enough. We have places in Georgia and Michigan, though we are not snow birds. The place in Michigan is on a small lake and will eventually become permanent for retirement, but since I am still working, we are in mostly in Georgia. When retired, we will become “reverse” snowbirds, leaving the south to move north. Unfortunately, we just can’t have two places AND continue with our love of classics (cars, antiques, and the Ultra Van). 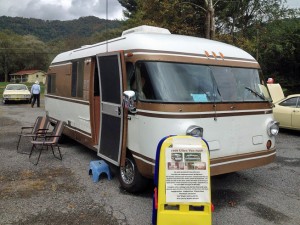 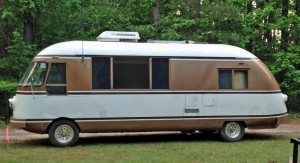 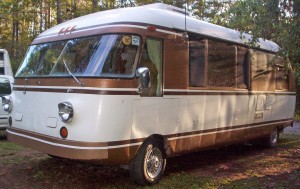 We have a 1968 Ultra Van. Being a motor coach, it could tow a trailer. We do not currently, since Chris is still getting used to driving the coach (I may even try driving it sometime).

This May, we found the Ultra Van on Craigslist about 65 miles away from us in Georgia. Funny thing, we were not looking for an Ultra Van, we were not particularly looking for anything (didn’t need any more classics – have eleven). I love searching and most often search all of Craigslist for anything with Corvair in the ad (we have eight Corvairs) as I am often searching for things for other people. I noticed the Ultra Van ad one evening and mentioned it to Chris. Out of curiosity, I emailed the seller with a couple questions and asked for more pictures and information as the ad had very little of either. Both of us avidly read the Corvair forums and someone had posted about the ad on one of the forums. A Corvair mechanic we know well had recently purchased an Ultra Van and posted that had this one been for sale when he was buying one, he would have bought this one instead. That was enough for me. I was at work and called Chris and told him to take deposit money from the bank and arrange to see it ASAP. By that evening we were the proud owners of Ultra Van #328 (they are identified by their VIN number). Did we know we were looking? NO! But, with our love of classics and also things that are unique, we just couldn’t pass it up.

When and who did the restoration?

Three owners prior to us owned the coach for many years and were avid RVers. There is a 100,000 mile plaque that was left in the coach from their travels. As far as we can tell and have heard from some of the long time Ultra Van people who knew those owners, the interior curtains, upholstery and carpet were all redone by her. The décor appears to be late 70s colors and patterns, but does not match the material of the original front seats, which we have but do not use. The front seats have been replaced with color coordinated swivel captain’s seats. Those owners had it painted (all coaches were originally white.) What you see in the pictures. That was around 30 years ago (heard from someone who actually had arranged it with the painter). It is a decent paint job, just needing a good polishing. There were some optional customizations done that were available to Ultra Vans many years ago. We are unsure when those were done, but at least 30+ years ago. It has one of the custom rear hatches that incorporates the back window so the hatch opens into both the rear storage and the bedroom area. With the hatch opening into the bedroom area, it has a custom raised platform “shelf” across the rear, which converts the two length-wise twin beds that normally flank the engine access in the center to a cross-ways extra-long double bed. This requires the whole bed platform to rise to expose the engine area access. A custom mattress had been made and then upholstered to look like a bedspread and was color coordinated with the other decor. An optional custom screen door was also added and in addition, a set of optional formed bumpers. Those bumpers were available for Ultra Vans for a number of years until the molds were stolen and destroyed.  Finally, the normal clear Plexiglas windows were all replaced with tinted Lexan. Again, we are uncertain of when that took place. 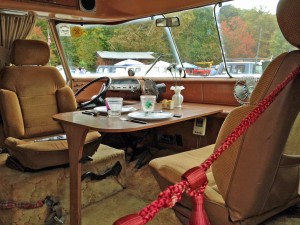 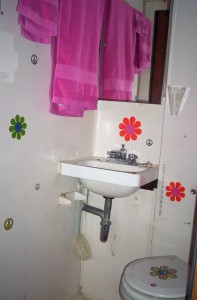 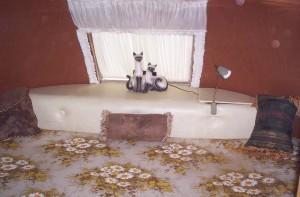 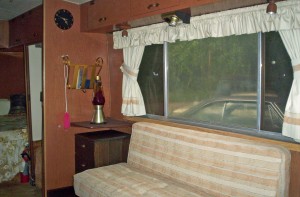 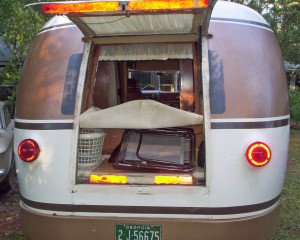 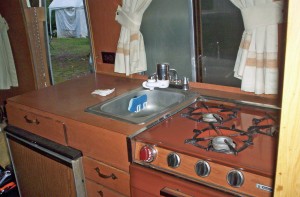 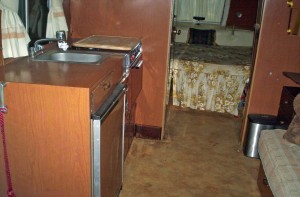 Other than a lot of scrubbing, cleaning, polishing, replacing some broken curtain guides, replacing old tires, fixing wiring and poor fuel connections and worn suspension parts, it has not required much work to be very presentable and road worthy. It’s still in almost exactly the same condition as it was in the 90s (we have some of the pictures from when it was for sale then) and other than the décor, everything else is original. Funny thing with the Ultra Vans, there were so many possible variations and so few manufactured (about 372) and they were often put together with what was available that day. Also, with very little literature, it’s almost impossible to say what is stock or original. It’s not pristine. We love things to be as original and stock as possible, but we also want to be able to drive and enjoy it quickly.

As time goes on, little things will be fixed and improved. I’ve already purchased 60s pillows and coordinating upholstery fabric to eventually do some reupholstery work. I have decorated the bath area with late sixties Ricky Ticky Sticky flowers and peace signs just like I had all over my Triumph sports car in 1968. I’ve added an original Lava lamp and on the bedroom shelf, put a Siamese Cat TV lamp. The table that sets up between the front seats, I set with Melmac dishes and burlap lined insulated tumblers from that era. It’s fun to listen to people remark about the period items.

What is unique and interesting about your trailer?

What’s interesting about the Ultra Van, it’s powered by a 95hp air cooled rear mounted Corvair motor. Ultra Vans have no chassis or frame, but are like an airplane’s monocoque construction. The floor is supported by the fuel, fresh water, gray water, and black water tanks running transversely. The first Ultra Van was designed by an aircraft engineer who wanted to tow his boat, but also have the convenience of his trailer. He used whatever he could find available at the time; a Corvair engine and transaxle, windshield glass from a Chevrolet cargo van, a Chevy C10 brake light switch, and so on. The coaches were eventually produced at a factory in Hutchinson, Kansas and were produced until the early 70s when Winnebago started making motor coaches for a few thousand dollars cheaper, which greatly reduced the Ultra Van sales.

Our Ultra Van still runs on the original 14” diameter wheels, which it can do since it only weighs about 3200 pounds empty. It is 8 feet wide, 8 feet tall and 22 feet long. It has at plenty of head room clearance inside, so no stooping to get around. It maneuvers fairly easily and parks within normal width parking spaces. I’ve already mentioned many of the unique items in the restoration section above. One very unique feature with our Ultra Van is the gaucho in the “living room.” From what we’ve heard from some of the Ultra Van information experts, there were only about seven gauchos installed in all of the 372 coaches. Like most motor coaches, it has a kitchen with sink, stove and refrigerator. It has a bathroom with a shower, a closet next to the bedroom area, all which can be shut off from the front portion of the coach, by opening the bathroom door 90 degrees. There is what they term a “coffee bar” that might otherwise be called a dash. A table with a folding leg has a lip that can be hooked on the edge of the coffee bar. With the front seats swiveled, it provides either a place to eat or sit and read or work on the computer. As with most trailers, there is lots of storage everywhere, even in the floor up front.

Yes, the Ultra Van is not a trailer, but as already mentioned, we just like classic, vintage “stuff.” The Ultra Van was just fascinating.

As for vintage trailers, about a year ago I looked into doing contract work and to broaden the availability of positions, I determined I would not mind living in a trailer in an RV park anywhere in the southeast for the duration of the contract. When I started looking for trailers, I got really interested in the Serro Scotty. Researched it intensely, but it seemed as though they were either in poor condition, too expensive, or snapped up before we could even go see it. We ended up buying a very nice, very original 1988 Skyline Nomad (yes, I know that’s not vintage quite yet).

Have you been to many rallies and what do you like about them?

I have not been to any Ultra Van rallies due to working and very little time off plus the short time we’ve owned the coach. Chris was able to attend an Ultra Van rally a couple of weeks after we bought it. He did not take it as he was in Michigan, the rally in Ohio, and the Ultra Van in Georgia. He had a lot of fun and learned a lot about the coaches and met people that had been associated with that particular coach with the prior owners that have been mentioned. I am hoping to fit at least one Ultra Van specific event into my short time off next year. We did just attend a couple Corvair events the past couple of weekends. With the Corvair engine powering the Ultra Van, we are accepted in Corvair circles. The last one we actually were awarded first place in the Specialty class.

What clubs do you belong to?

Can you share an interesting bit of information that most people don’t know about yourself.

Chris and I married just 4 ½ years ago, but were good friends in high school having a love of classic cars in common. I drove a 53 military jeep and he drove a 54 Buick convertible. Our friendship continued after high school with both of us belonging to a classic Chevy car club, drag racing and attending a lot of club events. Eventually, our ways parted until he found me again on Facebook after 35 years. It didn’t take long to realize our old friendship could easily be kindled into something even better. Our fairy tale has just gotten better over the last 4 ½ years, especially again sharing our classic car love. We’ve actually accumulated our 11 classics in that short period of time.

How did we end up joining TCT? This summer at another Corvair event we met another couple with an Ultra Van. Again we were in Michigan and the Ultra Van still in Georgia. She asked if we belonged to Tin Can Tourist. Huh? What? That evening I spent hours on the website and was hooked and immediately joined. What a fabulous history or organization.