Once again time to hit the road for a TCT Rally, well more of a historical trailer display for the Defuniak Springs Florida Chautauqua Celebration. I woke up this morning a little later than most morning that I travel since the event is only about 45 miles away. So I headed down to my storage shop to pick up the trailer I plan to take, this time I will be bringing a 1953 Viking Coach to display. We will also have 7 other TCTers bringing their trailers as well.

I arrived at my shop around 9am and finished packing a few last minuet items in the trailer, hooked up the trailer, checked all the lights, washed the trailer, and filled the water tank. I was now ready to hit the road, but realized I forgot my coffee pot so I figured I would stop back by the house as it was on the way out of town. When I arrived back home I realized my truck was running a little hot, but not bad so I just checked the radiator and it was a little low, after filling it all the way up I headed out for the road once again.  I only made it about 20 miles north when the truck started to overheat again! Couldn’t figure out why this was happening…..I just changed the water pump as well as the thermostat just this week! Anyway the truck cooled down and I had two empty jugs in the back of the truck, took them back to the trailer and filled them with water from the trailers fresh water tank using the water to refill the radiator from the water that was lost from overheating.  Finally back on the road again! 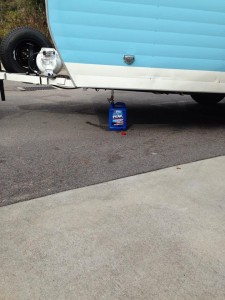 Another 15 or so miles the truck started to overheat again!!!! Pulled over at a truck stop hoping they would have some tools that I could buy/use to take the new thermostat out of the truck just to make it to the venue. No luck!!! So I waited for the truck to cool down again and used the trailers water tanks again to fill the radiator back up.  I was hoping to make it another 15 miles to the next town, as I pulled out I was passed at the cross intersection by a Jim and Donna pulling their 1958 Yellowstone (they were going to the same event) so as soon as the red light changed I tried to catch up with them, I figured Jim would have the tools I needed to fix my truck. For 10 miles I tried to call Jim on his cell phone, blew the horn right behind him, swerved over the line trying to get him to see me, flashed my lights, and even waving like an idiot with my hands out the window……but no luck, Jim and Donna were in their own world! I was forced to pull over again as the truck was overheating again!

AGAIN, pulled over, waited for the truck to cool down a bit, refilled the radiator from all the over flow that steamed out and back on the road. Looked like I was only going to get their 10 miles at a time! So once again I was limping along trying to keep the truck as cool as possible. Just my luck……ROAD CONSTRUCTION, with one lane closed on a two lane highway! At least it gave me a chance to sit for about 15 min never moving with the engine off….once traffic started moving again I cranked the truck and it had enough time to cool down quite a bit and I was finally able to make it to a large enough town with an automotive shop. I pulled in and went inside to buy the tools I needed to take the thermostat out of the truck, but of course I ended up making three trips inside the store buying all the parts and tools that I needed….next time I will remember to pack my tools, this is the first time I have ever forgot to pack the tools in the truck! 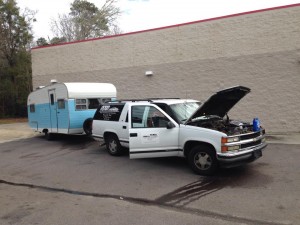 Finally got the thermostat out and bought a new radiator cap just in case that was the problem as well.  Had to refill the radiator AGAIN, and back on the road hoping this was the last stop. Only 15 miles from the destination, surely I could make it no matter what…..WRONG! 10 miles down the road, same thing!!! No water was leaking out of the truck, just overheating and boiling over of water!!! I cannot figure it out!!! So once again on the side of the road, waited for the truck to cool, and refilling the radiator from the trailers water tank. I also took the radiator hoses off to make sure they were not blocked somehow!

Last leg, only 5 miles away, surely I could make it now! AGAIN, WRONG!!! 1 mile from the finally destination, as soon as I passed the Defuniak Springs City Limits Sign…. I saw what can only be described as Old Faithfull under my hood!!!!! WATER and STEAM everywhere…..pulled over at a gas station and opened the hood (for once the temperature on the truck was very low….all the water spraying on the engine cooled it down quickly) However it came from a broken water fitting on the engine. One last time I filled the radiator with water, knowing it would start coming out the broken fitting, but figured I had less than a mile and would take my chances in getting to the exhibit area just a few blocks away. I took it easy coasting to each red light and shutting the engine off when I reached enough speed to make it to the next red light / stop sign.   It worked and I made it to my final destination!!!!!!!

I backed the trailer into place, parked the truck and decided not to even bother with the truck until tomorrow.  I set up the trailer and helped get all the other trailers that arrived parked into place. So far today we have a 1965 Aristocrat Mainliner, 1958 Yellowstone, 1963 Shasta, 1953 Viking, 1965 Shasta Compact, 1948 Spartan Manor, and a 1966 Norris…..one more to come tomorrow, a 1952 Vagabond. 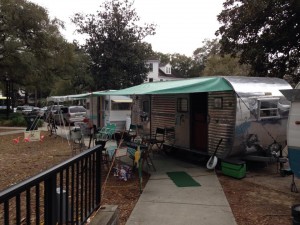 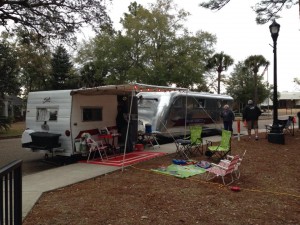 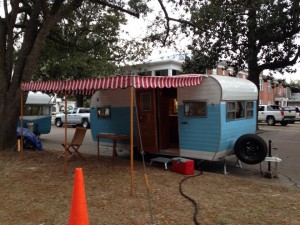 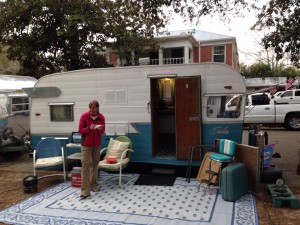 At 5pm we had a small meet and greet and sat around the camp fire until 930pm. hopefully the weather tomorrow will not be too bad, it is forecasted to rain quite a bit tonight and most of the day tomorrow.  It has been a VERY long day and I am ready for a good night’s rest.