After a good nights’ rest, I was happy to awake to a much warmer and sunny morning! I fixed the coffee for the morning and set out all the donuts I had for the members out under my awning. All the other members started to get up and about ready for the last day of open house. The crowds were rather slow most of the morning, which is typical at the event every Sunday but with one last Civil War Re-enactment after lunch the crowds would start growing as that time grew near.

We took advantage of the slow time to induct our new TCT members, and we had quite a few first timers at this event!!! 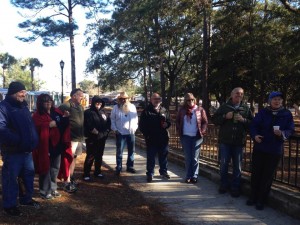 By 10am things were really slowing down and since we had heard from a visitor yesterday about a real old trailer just down the road on some property for sale Tommy was ready to get out and go for a drive! So we jumped in the truck to try and find this ‘old’ trailer. We just knew it would likely end up a late 70’s or newer trailer just like so many other fruitless excursions. After driving a short distance there it was! A 1952 Royal Spartanette just off the road next to an old house that was falling in. There was a real estate sign right between the house and trailer. The trailer has likely seen the last of its pulling days but there are still some great pars on the exterior and it appears to have all the original pieces inside the trailer, although the rear bedroom and front living room is trashed the center kitchen and bathroom appeared to be all original through the window. We may just have to research the real estate agent to find out about parting this trailer out before it all ends up in a dumpster once the acreage sells. 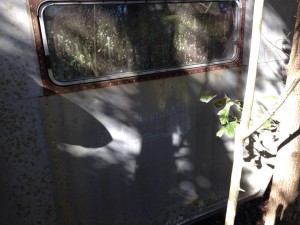 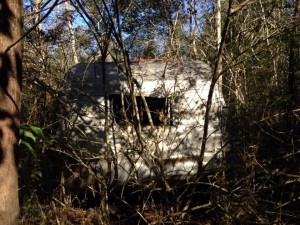 After driving around a little more and finding a few other trailers we decided to head back to our trailers. I decided it was finally time for me to fix my truck that was overheating all the way up to the event. I assumed it was a pretty simple fix of changing out the clutch fan…..since I already changed the water pump, radiator cap, water lines, and thermostat just this week! Changing the clutch fan was not as simple of a fix as I forgot to put my tool box in the truck. Tommy drove me around town to get the tools and the parts I needed to fix my truck. Thankfully with such a slow show day I was able to focus all my time on getting the truck fixed before the event was over this afternoon. 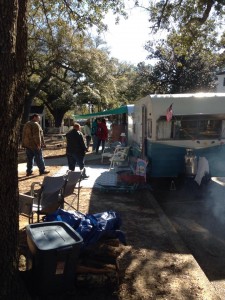 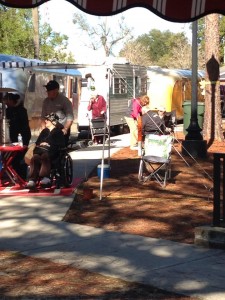 About 4 hours later I was finally done with changing the clutch fan on the truck. Just in time to start packing up the trailer and getting ready to head home. Everyone was walking around and saying their good byes, and started to pack up and hooking up their trailers. We all had to hook up one at a time as the first in line would have to pull out before the next trailer could hook up. Thankfully everyone timed it just right and as one trailer would pull out the next was just ready to hook up and move forward. I was one of the last to hook up and just pulled forward a bit to wait for Jim and Donna to get hooked up and ready to pull out as we were going to follow each other as we live in the same town. 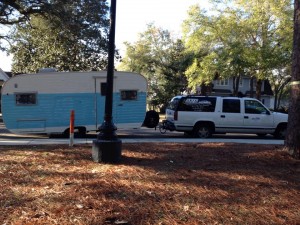 By 5pm we were ready to hit the road! I was in front and Jim and Donna were behind with their 1958 Yellowstone. As my luck would have it, my truck started to overheat AGAIN only about 15 miles down the road. I called Jim on his phone and told them to drive on, as I figured it was only the fact that there may have been air in the radiator and it would just need some more water put in it once it cooled down. So I pulled off the side of the road and waited for the truck to cool down a bit, added water to the radiator and hit the road once again. Another 10 miles down the road and here we go again! Thankfully this time I made it to a gas station, but as my luck goes there was no water hose or place to get water at the gas station. So I parked the truck and walked to all four corners in this little one red light town looking for water….nothing at the closed car wash, but there was a small gas station on the other corner with a long water hose out back. So I walked back to the truck which had cooled down enough to cross the street and pulled behind the gas station into the grass field. I filled the truck up with water as well as the extra jugs I had in the back of the truck and the onboard water tank in the trailer that was empty from this weekend’s camping. I felt much better having a full water tank on the trailer, there is very little between this last little town and home! Onward again! Once on the road I slowly watched the truck heat back up, made it about 12 miles and had to pull over, as I suspected in the middle of NOWHERE! Thankfully I had more than enough water to refill the radiator which was not really leaking water, just replacing what was boiling out/over flowing. By this time I realized it was going to take forever, so I called my father and told him to call a couple of our employees and get the other truck and head my way. I knew I could likely make it to the next town where there was a place I could park and have the guys take the trailer to our shop and my father and I could figure out a way to get the truck home. After making that call the truck was cool enough to hit the road again and I made it to the next little town of Bruce FL were the truck was overheating again and it was just starting to get dark, but I decided to make one more last ‘trip’ once the truck cooled down and I refilled it again I decided to drive the short 6 miles trip, over a long bridge to the little town of Ebro where there was a good size truck stop with plenty of lights and space to hook the trailer up to the other truck once they arrived. So ONE MORE TIME I hit the road and made it to the little town (more of a four way stop!) of Ebro FL. Finally I was a little over halfway home, so I parked the truck and went inside the truck stop to grab a bite to eat at the Subway store inside. By the time I finished eating the guys pulled in the truck stop. We looked at my truck for a while and could only determine that the radiator must be clogged enough to overheat the truck after running for about 10 miles. So we hooked up the trailer to the other truck and my father and I jumped into my truck to see if we could get it the rest of the 25 miles home. Amazingly luck was on our side and without the trailer in tow my truck made it all the way home without overheating, it did get warmer than it should, but not enough the actually over heat. I finally pulled into the driveway by 730 pm!!! WHAT A TRIP!