Skip to content
Dal has been a great ambassador for vintage trailering and TCT. He attends events from throughout the northwest and beyond. He is a great addition to the TCT Representatives.
Dal is hosting a rally this summer:
Bend Classic, Vintage Trailer Rally
August 7-9
J Bar J Ranch, 62895 Hamby Rd, Bend OR
The Bend Classic,  Vintage Trailer Rally will be held August 7-9, 2015 at the J Bar J Ranch just East of Bend, OR.  Camping will be on a grassy field with the Cascade Front in full view.  There is some water and 110 electric but this is a ranch and not a trailer park.
This is the same weekend as the HUGE car show in Bend.  Bend is packed with places to go and things to do.
Proceeds will benefit the programs of the Ranch.  It is a Tin Can Tourist rally, please come and enjoy.
Attendees will get a permanent event name tag, window placard and an “event” open/closed sign.
Contact Dal Smilie (dalsmilie@aol.com) with questions. 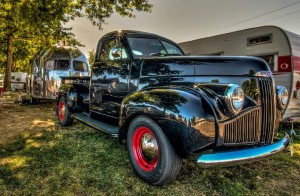 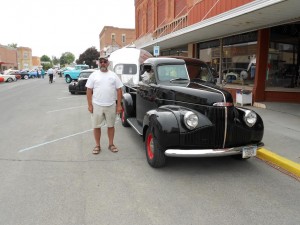 Introducing Dal Smilie:
My Father and his parents spent a lot of WWII living in areas where there were large war construction projects.  My Grandfather figured bids and supervised the plumbing and heating aspects of those jobs.  For a while he ran the entire construction project at Oak Ridge, TN which was part of the Manhattan Project.  My Father ran blueprints for the job as a Summer job during college.  Of course it was all top secret.  Still have his ration book.
I came along after that war but they still had the trailer and used it as he supervised the construction of power plants and such.  By the early ’70s they spent part of their retirement in a Holiday Rambler in Ft Myers.   My maternal Grandmother spent a good bit of time in her Holiday Rambler in Florida also.
I camped as a kid in Boy Scouts and in various forts we had built on open lots in the neighborhood.  We did a lot of tent, car and motorcycle/tent camping over time.  Now its in our 1949 Curtis Wright Clipper or 1972 Cayo Motovator.  No meal tastes better than those you make or share while camping.
For quite a while I had an aversion to pulling a trailer.  We tried to haul our racebikes for years in the back of a truck or van to avoid backing, parking and so on.  But while attending a large vintage motorcycle meet in Del Mar, CA I saw a group of about five couples who not only had their vintage motorcycles but also vintage travel trailers and vintage tow rigs.  And they all looked happy, sitting in their vintage lawn chairs.  I’ve kept in touch with Vince Martinico who was one of those who got us started with vintage trailers.
We started looking and found our 1949 Model 5 Curtis Wright Clipper about eighteen years ago.  Sitting out in the desert outside of Palm Desert, CA.  It was painted green, had a swamp cooler on top, door off, some windows out, with 1961 tags.  The owner was ready to deal and we packed the bearings, bought tires and rigged lights and towed it home.  We have probably towed it about 40,000 miles since then.
We also have a 1972 Cayo Motovator.  That is a Class C RV built on a Dodge van chassis with only 21,000 miles on it.  The Cayo family had built Avion until they sold it in 1971.  The new company did not want to build their classic pickup campers so they continued those under the “Cayo” name.  Then they built a larger version and called it the Motovator.  We have serial #5.  This unit was built a couple of weeks before I went to Viet Nam in 1971 and while the Cayo seems new, going to Viet Nam seems like a long time ago to me.
The dogs and us probably camp about 45 nights a year in our vintage rigs.
I currently work part time with homeless veterans in Helena, MT.  A rewarding retirement job where I have learned a lot.  Jane has taken a job running the Deschutes County Health Department in Bend, OR so I commute back and forth.
We hosted the TCT Fiddler’s Picnic Vintage Rally on the Mercier Ranch South of Livingston, MT the last two years.  In August of 2015 we will host the TCT Bend Classic Vintage Trailer Rally in Bend, OR (come on over to it!)  The entire proceeds of each rally were contributions to either the group that put on the Fiddlers Picnic itself, an acoustic roots music jam, or this year to the J Bar J Youth Ranch where the rally will be held.
Vintage camping is great fun.  Being at a rally, volunteering at or hosting one is even more fun.  Even more fun is towing with a period tow vehicle.  You can’t get out of a gas station or into a campground without getting swarmed by interested folks, a great way to spread the vintage camping message.
We found ourselves utilizing the Tin Can Tourist site quite a bit.  After awhile it just seemed wrong being free riders on the site and we joined eight or so years ago to help support  this great organization they have breathed new life into.  Since the Curtis was designed and built by Wally Byam (and Curtis Wright) who is the man behind Airstream we also belong to the Vintage Airstream Club.  And the Rolling Oldies Vintage Trailer group in Oregon.  Great organizations, all.