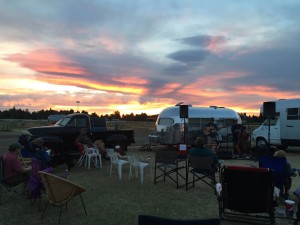 There was a bluegrass jam going Friday afternoon and Saturday morning.  “Trailer 31” played folk/blues/bluegrass inspired music Saturday night.  The 500 car Flashback Cruz car show took over downtown Bend.
With 140 restaurants, 25 microbreweries, Wilco playing in town and much more there was no lack of things to do.  Inquisitive Bend residents came out in force Saturday for the open house.  Mobs of them.  They kept coming even on Sunday morning as attendees pulled out and waived good-bye.
The film crew for GAC’s Flippin’ RVs TV show filmed throughout, featuring Bend’s Flytecamp and their wonderful vintage trailers.  Two other local restoration businesses and two from out of state attended.
Bend and the Eastern side of the Cascades can clearly support a successful rally.  Plan for this event again August 11-15, 2016.
Additional photos