A book review by Hunt Jones 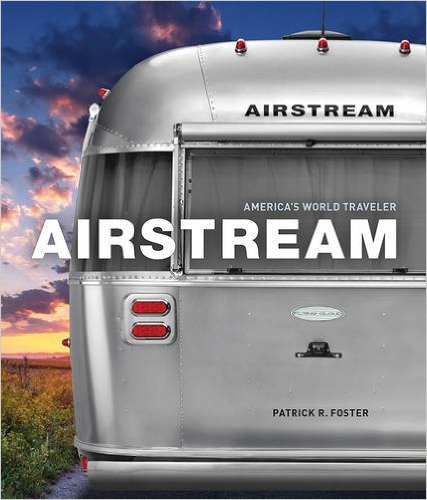 “King of the Road” is Patrick Foster’s term in the Introduction to his newest book describing America’s longest produced recreational vehicle.  Airstream America’s World Traveler was just released in June 2016.  If you are interested in the marque, have owned or currently own an Airstream or Argosy and require a concise history of founder/visionary Wally Byam along with generations of travel trailers and motor homes produced by Airstream, this book may fit the bill.  It joins two other previous publications, Airstream Burkhart/Hunt (2000) and Wanderlust Banham (2005), noted for their historical presentation.

Patrick Foster is a well-known and accomplished author, having received multiple journalism wards with his books on Studebaker, Hudson, Metropolitan, Jeep, International, and other AMC models, all of which he is very familiar  Pat researched the data for this book using the archives at Airstream’s Jackson Center OH headquarters and  interviewing personnel there.

So, what makes this new book different aside from another 10 years inclusion of corporate history?  A  few things.  First, despite no Table of Contents, the layout is chaptered by logical sections such as “Early Days:  1930-1947” and “Days of Glory:  1960-1973” for example.  Second, the presentation is entirely linear.  The text does not whimsically jump around skipping years, decades or interest.  The photos are used to accompany and illustrate the text.  Third, the meat is always on the bone.  There are no periodically interjected forays with interviews of current owners to break up the historical flow to the point where you must recollect what you read.  Fourth, and this is entirely subjective, Pat’s writing style, his “voice,” is relaxed, not stilted or staccato.  When he addresses an historical point that may have different origins (The First Trailer Ideas, p. 20), neither is claimed as gospel but both versions are presented.  Additionally, I found more information in Airstream  America’s World Traveler than in previous publications which are primarily loaded with full page photos.  An in-between size containing 189 pages, the book is less than coffee table sized and something you can read on your lap (if you have one).

Now, a word about the photos…most are stock archival ones either black and white or color, the latter the standard marketing ones from the 60’s and 70’s.  There is an excellent inclusion of the Chris Deam concept photos, the new Class A motorhomes, and especially the Interstate vans.  The ill-fated Skydeck is included, but neither text nor photo of the equally production-short Basecamp model is to be found.  Also, if you are a hard-core ‘streamer and have a detailed knowledge of vintage models and years, you may notice a number of errors in photo captions which misstate what is portrayed.  I noted eight of these as well as an Avion photo that sneaked in and alerted the publisher who will make corrections on a subsequent printing.   On a personal interest level, I was hoping for more information on the early year’s models, the wooden ones that preceded the 1936 aluminum Clipper but not the Torpedo.  There is a dearth of coverage for these in prior publications too, so it may be that the archives are short on these fascinating creations.

If you want a concise history of Airstream through 2015, this is your book.  A good book is like good scotch.  You don’t turn down another bottle.