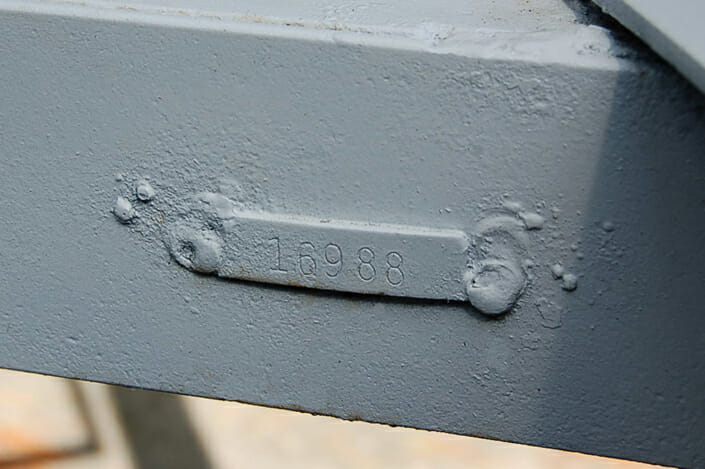 The first thing to understand, a serial number is your VIN for a Vintage Trailer. Those terms are used interchangably and the DMV has a hard time with this because they don’t normally deal with vehicles that are this old. They will ask you for the VIN and expect a modern format but vintage trailers used serial numbers. You may have to educate your DMV employee.

To figure out what kind of trailer you have, you need to find serial numbers, VIN, markings, makes/manufacturers of equipment, paperwork – anything that could be a clue. Here is video on uncovering VINs on tongues

Serial numbers are frequently found on the tongue rail on the passenger side. (Usually on top, but may be on the drivers side or the side of the rail). Use paint remover or sand lightly to uncover the numbers. The first two digits may be letters that identify your make, followed by the year, length and number of production. Example: Serial number (or VIN number): MR 57 25 123 is a Monterey, 1957, 25′ number 123.

You can also find it, sometimes but not always, inside a cabinet or entry screen door. The metal plate with the VIN number can be found on the trailer tongue, frame rail leading to the hitch or it could be stamped on some metal part of the frame.

VINs were first used in 1954 in the United States. From 1954 to 1981, there was no accepted standard for these numbers, so different manufacturers used different formats. Earlier than 1981 – the serial number from the manufacturer is consider the VIN.

This is NOT a serial number – this is a patent number of the tongue manufacturer. Marvel was a supplier of lots of parts to most trailer brands. Lots of people get confused thinking this is their serial number but it’s not.

This is a serial number and it is an intelligent one as well. The first part 160, means it is 16’0” in length. Notice the punch separator. The 2nd part is the sequential number used that year. They probably started at 1000 and this trailer is the 25th made. Again the punch separator. The 3rd part is the year the trailer was made – it’s a 1967. Wouldn’t it be nice if every serial number gave you this much information!

Also – there are plenty of homebuilt trailers out there – you might have one. If so, your not going find any information on it. It could just be a custom one-of-a-kind!