Guiding principles: clean camps, friendliness among campers, decent behavior and plenty of clean, wholesome entertainment for those in the camps

“after WW II the tourists gathered in Traverse City, every summer”

The success of the movement was said to be due to the legend that once you roll with a trailer you’ll never be satisfied with a stationary home again.

In 1982, Dorothy Trumble, of Clearwater, Florida, and TCT member, donated pictures to Florida Museum of History

Billie Vliet Tracy – El Paso, Texas- wrote of experiences traveling with her parents that is part of the Florida Museum’s collection

Ode to the TCT The Tin Can forever Hurrah! Boys Hurrah! Up with the Tin Can, Down with the foe. We will rally round the campfire, We’ll rally once again. Shouting the auto camper forever, We will always be faithful. We will always be true. We will stand by the canner, our duty we will do. And we will rally around the campfire as we go passing through Shouting the auto camper forever. By W.H. Hesselman

The Little Lamp of Friendship The little lamp of friendship, We light along the way. Go shining on far down the years and brighten everyday. “Tis love that keeps them shining And sympathy and trust.” God help us that no lamp go out Because we let it rust. Unknown

A Grand March kicked off the opening ceremonies.

There was a definite rivalry between the campers and hotel owners. The hotels discouraged camping in public parks as contrary to public health and incidentally contrary to their business. They called them Tin Canners or those literally living out of tin cans, having limited facilities for cooking the tin can was a convenient item and a friend indeed.

The originals called themselves “Soupbone”

Our organization has a “tar and feather” element in it. The city of Tampa labeled the place (the camp), a nuisance and the better element were compelled to go to work and clean it out or lose their privilege as campers. Panhandlers were also declared as undesirables. When fishing was good the surplus of each individual fisherman was dumped on the ground, the less fortunate or slothful could help themselves.

Since 1933 when membership cards were first issued, over 43,500 have been placed on our filing list. Early Qualifications: ** over twelve years of age and good moral character. Must be living in a tent, car house, car, trailer or camp (tourist ) cottage, on or near the site of one of our meetings at the time application for membership is made. Applications must be made in person. Cost: Each applicant is required to purchase an official lapel emblem and each car carry on official car emblem. Membership card good for life, is given. At each official meeting each members pays for a registration card that entitles that member to all activities of the two weeks of meetings.

Motto – “Do unto others as you would that they should do unto you.

Each camper also carried a large assortment of canned goods. There would be cans stashed under the seats, slung over the top, packed along the sides, tucked behind cushions and stacked on the floor.

Before going to bed be sure to lock the manipulating devices on your automobile so that no one may appropriate the carriage while you sleep. You might also place a six-shooter under your pillow. You will sleep just as well, and it might come in handy.

“They called us Tin Can Tourists, because of our cars and the fact that canned food was frequently on our menus.”

“Most people would have nothing to do with us. They thought we were gypsies. And a lot of sheriffs met us at the county lines.”

“With the postwar (WWI) drop-off in industrial production in the North, many laid-off workers still had a cushion of money – and a Ford Model “T”. Instead of despairing, they decided, ‘Lets take a vacation.’ And they headed to Florida.”

“St. Petersburg had endured wisecracks in that era (20’s) as a “tin can” tourist town, with some avaricious natives avowing that the tourists ‘ arrived with one shirt and a $20 bill – and never changed either all winter’.”

” a new breed of winter tourists – restless, full of energy, frequently cosmopolitan rather than provincial, from cities instead of farms.“

“on display (at annual gatherings) are units ranging from small honeymoon homes to big macadam mansions, finished in padded leather. Prices vary from a few hundred dollars to a few thousand dollars.”

“If you met a (tin lizzie) on the road with a little tin can on the radiator cap, you knew he was a member and a gentleman.” 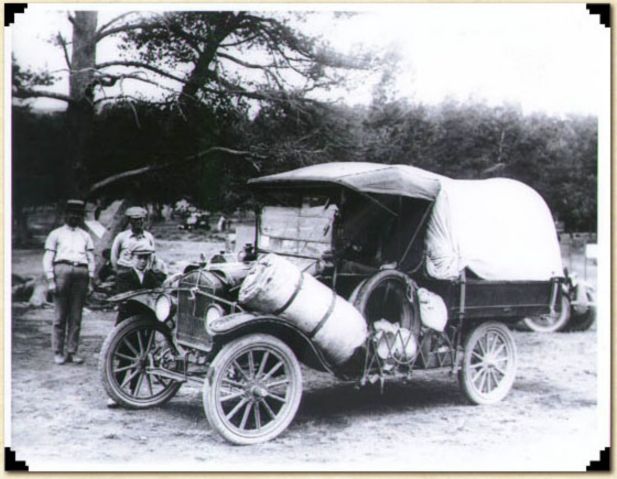 “It is said that before the typical tin Can Tourist relinquishes his hold on a 25-cent piece he gives it a farewell squeeze of such violence that the eagle on it frequently emits a strangled squawk of anguish.”

In his story “The Golden Honeymoon,” Ring Lardner follows his main characters on a trip to St. Pete, where the narrator/protagonist portrays, inter alia, the Tin Can Tourists. 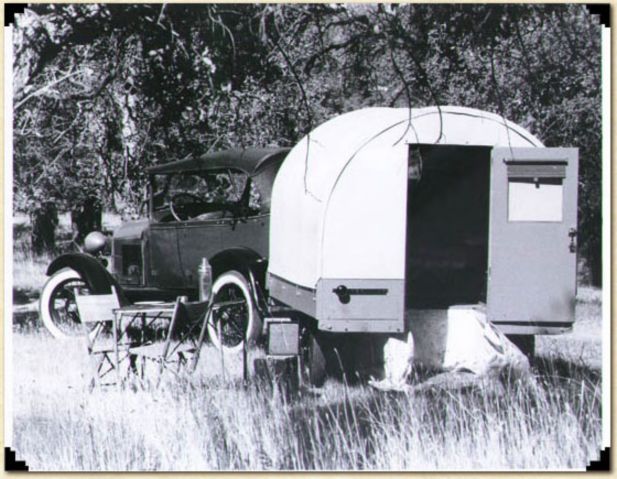