In 1953, Bennet Petersen, built a prototype teardrop trailer in the Fitzpatrick Trailer Service shop (in Burbank, CA). Bennet took on Fitzpatrick’s accountant Roy Greenwood as partner (‘he was the money man,’ says Bennet) and began producing the Benroy teardrop trailer. From then until the end of 1955, they manufactured 480 trailers, which sold for (are you ready for this?)….$420.00.

Bennet Petersen designed and built what is still acknowledged as one of the classics of the teardrop world. He experienced what big-company competition could do to the little man, eventually went out of business, saw his molds picked up by King Richard’s, a trailer dealership in El Monte, CA which only produced a few units. He watched as other manufacturers came along and reproduced many of his ideas and was actually disappointed when some of his favorite features weren’t included. Then he saw the market fall off to nothing.

With its smooth design, bright silver body with fire engine red trim, the Benroy was a saucy little two-door trailer. Built on the standard 4’x8′ plan form, it was 10′ long and 68“ wide overall, and weighed 760 pounds. The sidewalls and floor were 3/8” fir plywood varnished on the inside, the deck lid and door ribs were made of laminated birch plywood, and the deck lid interior was made of 1/8“ bending birch plywood. The exterior was .032 mill finish aluminum. The kitchen area contained a two-burner propane stove, a porcelain sink, a 25# ice box, a six gallon water tank with outside filler cap, a drop leaf table, and a 6-volt dome light. The interior featured cabinets and shelves for storage, a three-quarter size mattress, and another dome light. The chassis was framed with 1/8”x2“x2” steel, using 1250 pound springs and axle. Steel fenders covered standard 6.50×15 tires and wheels. Benroy produced four units at a time, and only sold one unit direct. The rest went to dealers in southern California, Portland, Seattle, St Louis, Texas and Virginia. Many went to rental lots (such as Humes Sporting Goods) where families could rent them by the week. Dealers like Stout Motors, with 5 sales lots, paid 80% of the wholesale price until the unit was sold. Asked if he ever thought teardrops would become popular again, Bennet says, ‘I thought they would come back, as they have, with limited production.’ He doesn’t believe there is enough market for mass production, however. ‘Sales were limited, even in the ’50s,’ he says. Those fortunate enough to own an original Benroy know their worth

Bennet H. Petersen passed away in December of 2008. While we was alive, he enjoyed seeing the resurgence in popularity of the teardrop. And watching his trailer and his ideas being recreated by some wonderful craftsmen in California and elsewhere. ‘I feel a certain amount of pride,’ Bennet says, when they use the term ‘Benroy reproduction.’

* Some information and photos provided courtesy of Grand Whipp. *

Benroy Trailer Products was a Burbank California company founded by Bennet Petersen and Roy Greenwood. The original prototype was build by Bennet Peterson in 1953. Production continued until the end of 1955. They reportedly produced nearly 500 trailers.

After Benroy Trailer Products closed their doors in 1955, The Benroy line was then picked up by ‘King Richards’ Trailer service. King Richards produced and sold a Benroy designed trailer for a few years afterwards.

* According to Bennet’s family, there was also a larger Benroy trailer, but so far no photos or examples have been found. Ben’s nephew remembers playing in them as a child. 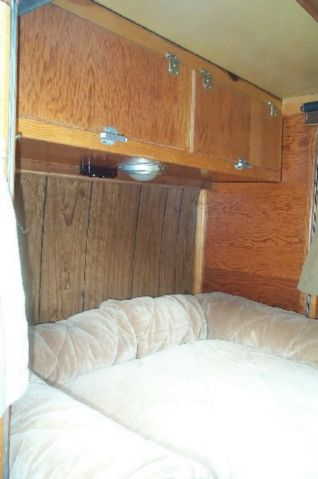 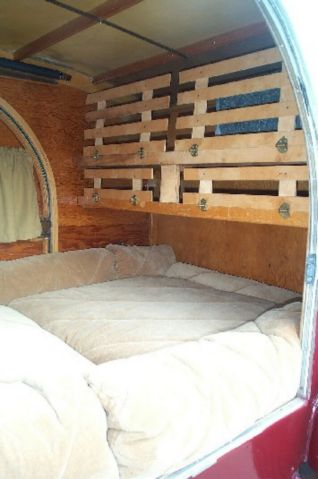 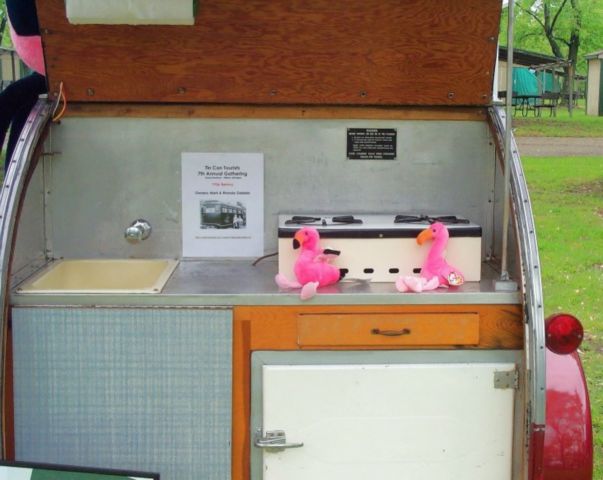 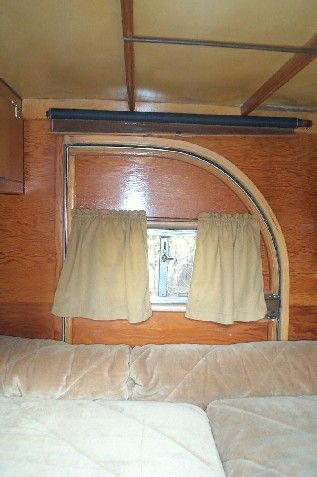 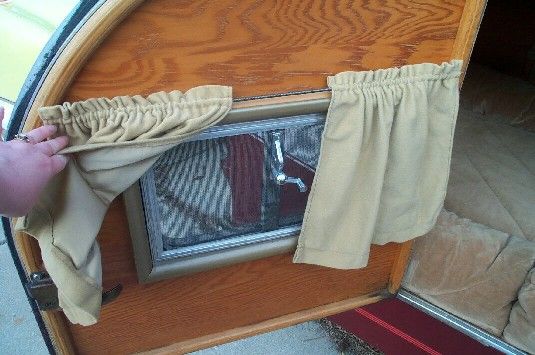 $420.00
Benroy produced four units at a time, and only sold one unit direct. The rest went to dealers in southern California, Portland, Seattle, St Louis, Texas and Virginia. Many went to rental lots (such as Humes Sporting Goods) where families could rent them by the week. Dealers like Stout Motors, with 5 sales lots, paid 80% of the wholesale price until the unit was sold.

Bennet with the Gelstein’s former Benroy. The Gilstein family sold this trailer to Ben’s nephew. The family now owns 2 of the trailers made by Ben. 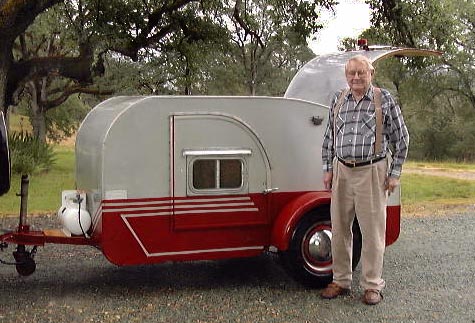 Co-founder Ben lived in Lotus, CA when this photo was taken 5-7-00 by Charles Tello of Ventura, CA. Charles’ Teardrop is serial #135 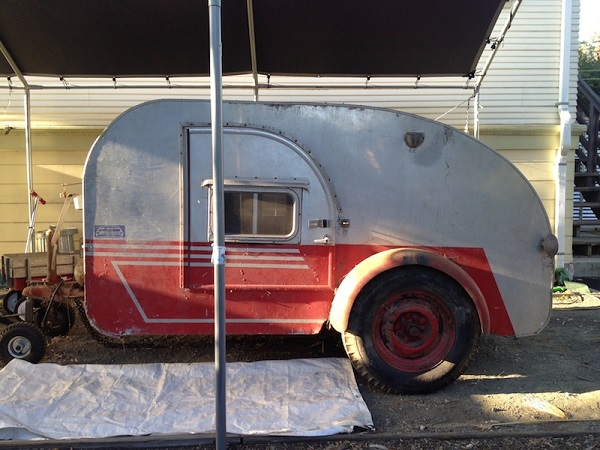 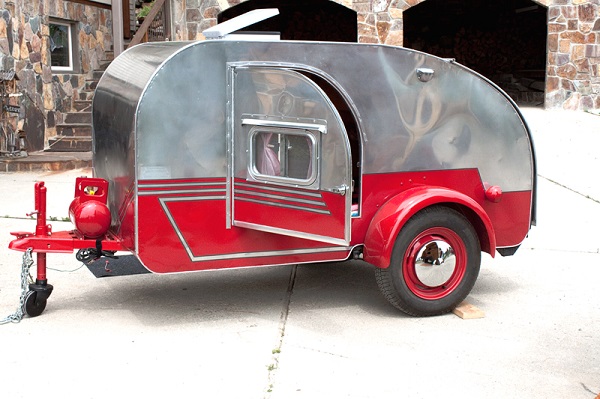 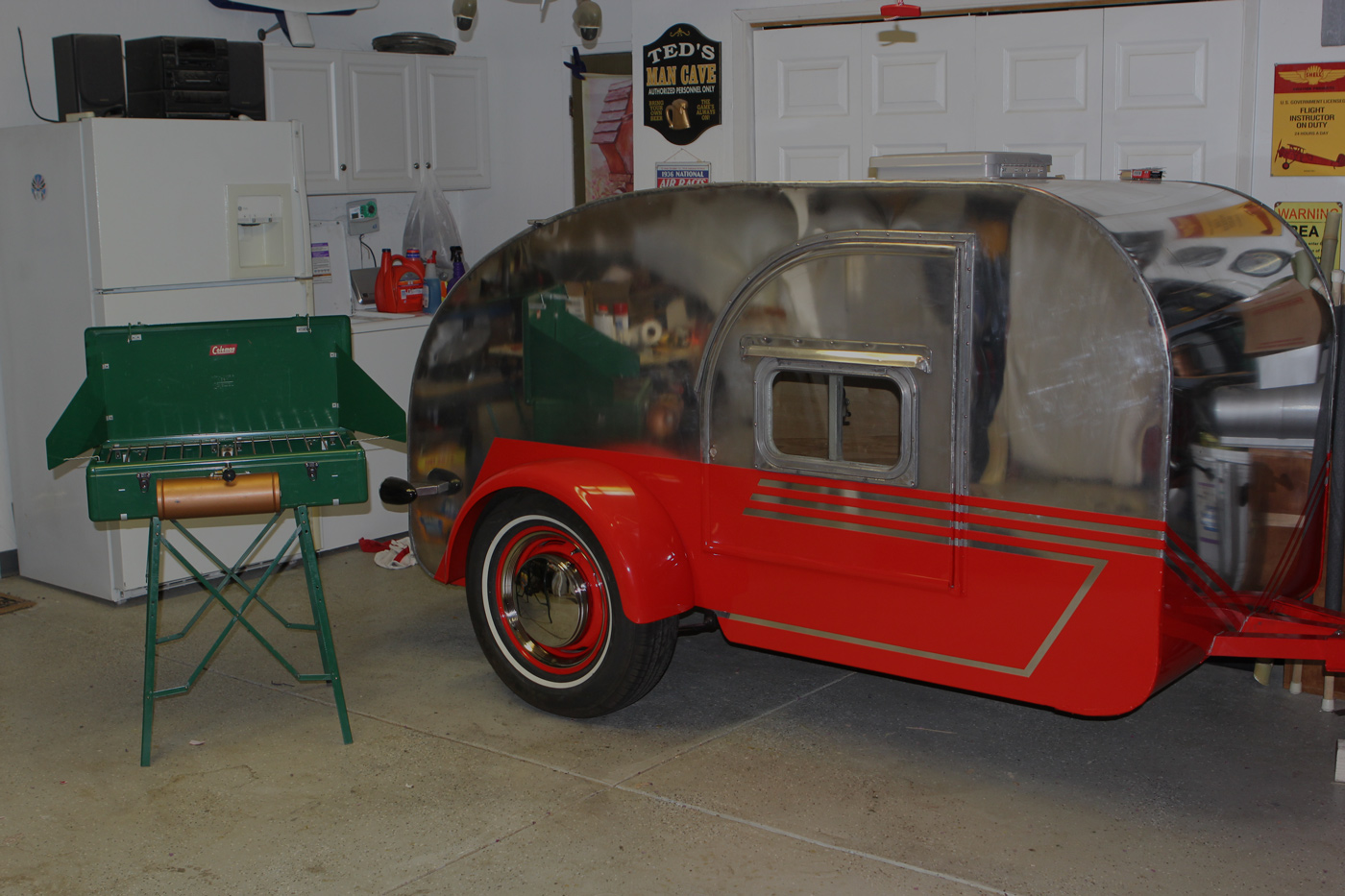 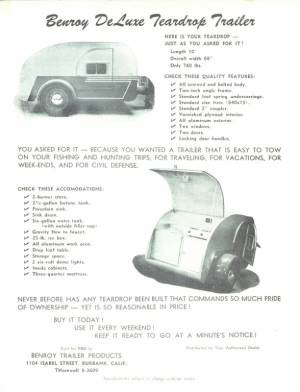 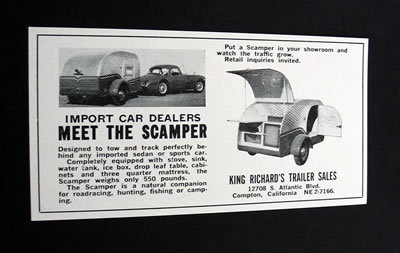