Bowlus was the first all aluminum travel trailer designed by Hawley Bowlus in 1934. The trailer is an ultra-light one weighing only about 1100 lbs. It is made of panels of riveted alclad aluminum that is screwed to a galvanized steel tubing that is acetylene welded together. This constuction method was very similar to the way aircraft were constructed.

“The pleasures of touring and camping and seeing nature at her best has instilled a wanderlust into the hearts of so vast a number of our people that the demand for comfort in this national pastime has reached a point that has engaged the attention of men rich in the knowedge of construction on proven lines gathered thru experience in the aircraft industry, as well as the auto industry. “No longer need we wait for years of experimentation that has characterized the automotive industry, but profiting by years of experience we wish to introduce you to the outstanding features of the BOWLUS ROAD CHIEF.” – Bowlus Road Chief brochure 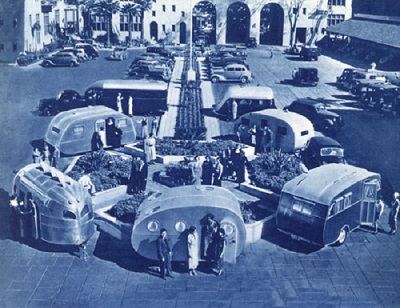 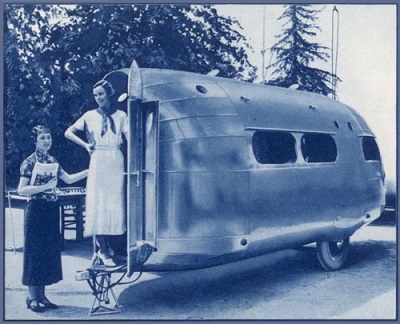 The Soaring Connection Legendary glider pilot and builder Wm. Hawley Bowlus built some rather famous aircraft during his career.

The Spirit of St. Louis. Bowlus was the shop foreman at Mahoney-Ryan Airlines, in San Diego, California, and supervised the 1927 construction of Charles Lindbergh’s famous trans-Atlantic airplane.

Bowlus’ sailplane #16, built in San Diego, California (1930), is commonly known as the Paper Wing on account of his using kraft paper for his wing rib shear web.

Bowlus’ S-1000 and Model A series of sailplanes, also built in San Diego. Both of these two serieses resembled the Paper Wing but had conventional “stick & gussett” ribs. Bowlus broke the one hour duration record (eventually to more than 9 hours) flying a S-1000 along Pt. Loma, in San Diego. Bowlus’ friends Charles and Anne Lindbergh flew Model As.

The Bowlus-duPont “Senior Albatross” series of sailplanes. These were the first true sailplanes to be built in the US, and were built in San Fernando, California in 1933 & ’34. Of this four glider series, three were built for Richard (Dick) duPont and one for SSA founder Warren Eaton. The Albatross I was used by duPont to win the US Nationals in 1934 and to set a World Distance Record in 1935. The Albatross II was used by duPont to set a World Distance Record in 1934, and Lewin Barringer used it to place 2nd in the 1934 US Nationals. I own the Albatross II, which is currently under restoration.

Bowlus’ Baby Albatross sailplane, which was one of the first kit-built gliders offered to the soaring public. Approximately 100 kits were produced in San Fernando from 1936 to 1941. This pod & boom glider is often called “cute.”

The Bowlus-Nelson Dragonfly, built in San Fernando in 1945, was one of the first motorgliders built in the US.

Everyone has a hobby, and Bowlus’ was building scale-model live steam trains and was associated with the Los Angeles Live Steamers. His trains plied the tracks of Travel Town in LA’s Griffith Park for many years, bringing delight to the thousands of children and adults who rode on them.

AIRSTREAM HISTORY BOWLUS, THEN AND NOW—PART 1 JANUARY 2, 2017 Most people have never heard the name Hawley Bowlus, but Airstream historians know him well. Bowlus, the Ryan Aircraft pilot and engineer who served as production manager for Charles Lindbergh’s Spirit of St. Louis in the late 1920’s, was also the creator of the first aluminum riveted travel trailer in 1934—not Wally Byam, as many believe. 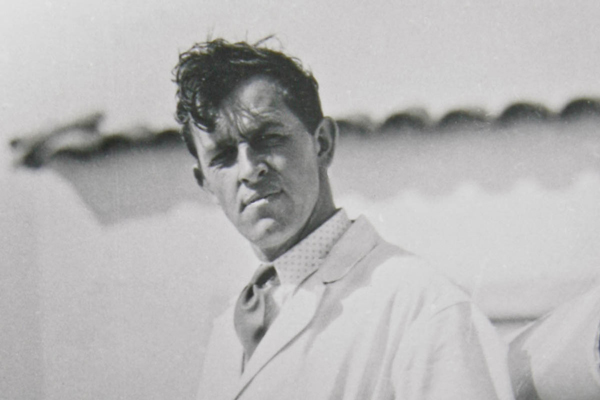 Eighty years later, the (considerably upgunned) Bowlus Road Chief trailer has been “newly imagined” by the family of John Long. Long, President of Bowlus Road Chief LLC, towed his prototype new Bowlus trailer to Jackson, California for Alumafandango 2016, where he delivered a seminar on the colorful history of the Bowlus and Hawley, “the inventor of the aluminum trailer.”

“Hawley was quite an innovative designer and engineer who spent almost his entire life working on aircraft, mostly sailplanes and gliders,” explained Long. “That was really his claim to fame.” Bowlus worked closely with Charles Lindbergh, and was present at the factory when the historic telegram arrived, asking them to build the monoplane that Lindbergh was to pilot solo across the Atlantic.

It was sailplaning and soaring that Bowlus preferred, though. Among other achievements, he broke Orville Wright’s soaring duration record in 1929. “All those records he broke, he built his own sailplanes to do it,” said Long. “He built the first one when he was about 16 years old—which he crashed. And then he built the second one, which he also crashed. He continued on, building these sailplanes, and developing the techniques to do it.”

“Sailplaning was sort of the ‘extreme sport’ of the day,” Long laughed. “In the 1920s you had to be pretty well-off, you had to be adventuresome, and you had to be willing to crash—a lot.” Sailplaning was a dangerous pastime for those helping around the hanger as well as the pilot: early models were launched using huge elastic straps, stretched tight and released by hand like toy rubber band planes. “Six guys would run down the field pulling the band, as much as they could go back,” said Long. “Then they let go. The guys pulling on the band would duck immediately down on the ground and just hope that the sailplane would go over them.”

German designer-engineers—who developed sailplanes during the first World War—became the world leaders, and Hawley Bowlus carried the movement forward on the west coast of the US. “He was instrumental in America’s knowledge about sailplanes; how they worked, and what was the best design,” said Long.

“There was always this kind of competition between German-made sailplanes and American designed sailplanes, and Hawley was right in the middle of the field.” Literally: when Bowlus was a boy his father purchased a farm with an orange grove in California. Unable to make a living from his orange crop, Dad Bowlus shifted his trade to furniture manufacturing, and built a large workshop on the land. “It was just ideal for Hawley,” said Long. “A shop on a large piece of land where he could do all these crazy inventions.”

The “Bowlus Ranch” soon evolved into the local haunt for anyone interested in aviation. “People stayed in his house, they came in everyday, it was a hangout place after work,” said Long. “The place to be for other aviation designers, and people building their own airplanes. I’m not sure how many of these people were actually paid. These were students and hanger-oners, as well as people who actually worked in the factory who were paid, you know, a dollar a day. This was during the depression, and times were extremely tough.”

The original “work force” of individuals posing at the original Bowlus factory What does any of this have to do with the invention of the aluminum travel trailer? Everything, Long went on to explain.

Before 1934 when the first aluminum travel trailer (the Road Chief) was complete, Bowlus built a number of trailers—but they were intended only to tow his sailplanes to their launch sites. “Where he built them, he couldn’t fly them,” said Long. “There wasn’t enough wind there. He would take them up to Tehachapi and down to San Diego and all sorts of different places to fly these airplanes, so he needed a trailer.”

Bowlus developed a transport trailer with a “tubular triangulated” design that accommodated an entire plane with the wings removed and stowed alongside. He built the trailers like he built his airplanes: “exceedingly aerodynamic and insanely light weight,” said Long.

Bowlus would often need to overnight at launch sites, waiting for the wind to change. “They would set up these tents where it was extremely windy and they would always be blowing down,” said Long. “So Hawley had this idea that he would build a tent inside his transport trailer—and that’s how the idea of the lightweight travel trailer evolved.”

Bowlus built the exterior of his trailers from Duralumin—one of the earliest types of aluminum alloy used in the construction of aircraft—and situated a domed fabric tent inside. His wife wasn’t enthused. “It smelled like doped aircraft cloth,” said Long. “She said, ‘you should really do something better’.” Bowlus jettisoned the tent idea, and began appointing the interiors like a home.

From 1934 to 1936, Bowlus designed and built over eighty of his signature aluminum trailers. “Unfortunately, he wasn’t the best businessman,” said Long. “He was always having problems paying his suppliers, and getting credit for his materials. As a business it was kind of up-and-down.” Enter Wally Byam.

Byam, who we know founded the Airstream company, began making making plans for his own travel trailers in the early 1930s. “They were flat-walled, very small, and made of wood with a steel frame,” explained Long. “And he was building these about 25 miles away from Hawley.” Byam was “somehow involved in sales of Bowlus trailers, I’m not exactly sure,” said Long. “He had a trailer lot, and he bought and sold used trailers. My guess is that he bought a Bowlus trailer, and was planning to become a dealer.”

Byam was an occasional visitor at the “Ranch” when Bowlus discontinued his unprofitable trailer line to return to his first love, aircraft. In 1936, Byam adopted the Bowlus design for his Airstream Clipper.

These were the Road Chief, the Papoose, and the Trail-Ur-Boat.

Yet that is not all because the Bowlus Trailer product list also includes: The Motor Chief which was what we today call a “motor home”.

The Bowlus Road Chief Two hundred Road Chief trailers were eventually produced by the Bowlus-Teller Manufacturing Company, in San Fernando, California, from 1934 to ’36.

To quote the brochure:

“The body and chassis of ‘The Bowlus Road Chief’ is constructed of rust proof steel tubing, acetylene welded together, covered with duralumin closely rivited.”

“The interior of ‘The Bowlus Road Chief’ is lined with suitable material for beautiful and attractive decorating.”

“The outer walls of ‘The Bowlus Road Chief’ are throughly insulated agaist heat.”

“The streamlining of ‘The Bowlus Road Chief’ is the result of years of experience in aircraft building and wind tunnel experimentation. Proper streamlining insures economy, prevents strain on the auto, creates exceptional riding qualities, and adds greatly to its beauty.”

In fact, the Road Chief is the forerunner of the Airstream trailers. Before he founded Airstream, Wally Byum was a salesman who sold Bowlus Road Chief travel trailers.

The Papoose This was a shorter version of the Road Chief.

The Trail-UR-Boat This is described as “a sportsman’s unit.” It consisted of two aluminum boats which were transported gunnell to gunnell. The bottom boat was the trailer and could be used as the sleeping compartment. The top boat was the boat part and was carried inverted. In this way, with the furnished stancions and storm curtains, it could make a weather resistant camping trailer.

The Motor Chief This is what we would today call a “motor home.” Very similar to the Road Chief except that the door is in the side, and it has an engine in the rear.

The De Luxe Road Chief This is a longer version of the Standard Road Chief with a chemical toilet!

The trailer is insulated and trimmed in birch plywood. The galley which is just inside the door at the front came standard with a sink, icebox, water tank, stove. The central area on the left has a couch that converts to a bed and on the other side a table and two chairs that also converts to a second bed. Then there is a clothes closet on the left side and a chest of drawers made out of aluminum on the right. The door to the clothes closet opens to give the rear bedroom privacy. At the back is a bedroom with a V bed and a small cabinet at the very rear. It’s 19 feet long and 7ft 6” outside and inside it’s 6’1“ since I can stand up in it. About 200 were built of which mine is number 149. 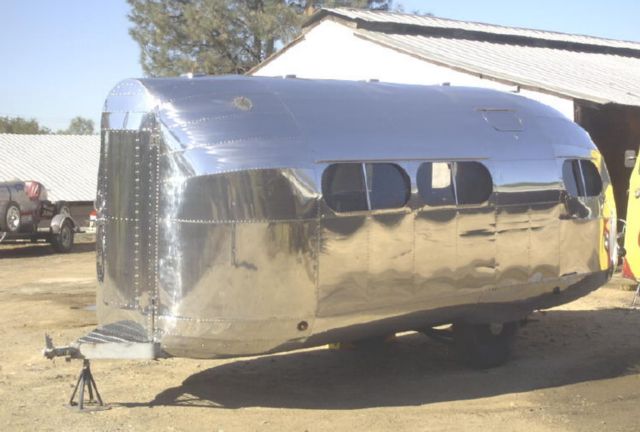 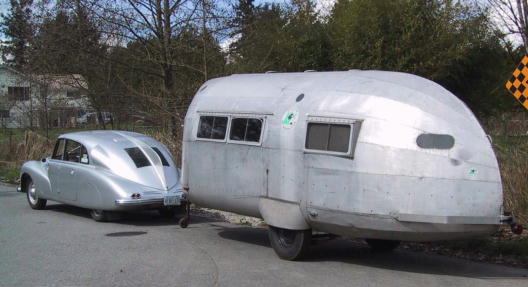 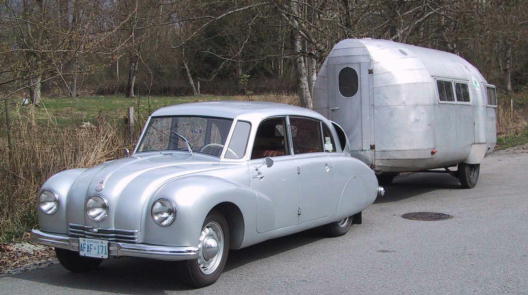