A fifth-wheeler for a financier The fifth-wheeler floats between the world of the trailer caravan and that of the motorhome, not quite fitting into either. Whichever side of the divide you choose to classify this unusual outfit, however, it certainly deserves its place in the broader history of caravans. The makers were the Curtiss Aerocar Land Yacht company, certainly related in some way to the Curtiss aircraft manufacturers whose founder Glenn Curtiss was a rival of the Wright brothers in the early days of aviation. The outfit was made for a New York financier Hugh McDonald to take him on his daily journey from Long Island to Wall Street. Providing the motive power was a 1932 Graham Blue Streak coupé with 8-cylinder 4022cc engine developing 90 bhp and giving the car a solo top speed of 85 mph. The Blue Streak introduced skirted front wings to the American market and was immortalized in model form by ‘Tootsie Toys’ – a Tootsie Blue Streak was the treasured possession of many a small boy across the USA in the 1930s.

The fifth-wheeler Land Yacht is constructed on aircraft principles with a frame of light metal tubing braced by wire cables. Up front McDonald had his mobile office with a desk and wicker chairs. At the rear was a galley and a lavatory. No doubt the Land Yacht’s crew included as well a the chauffeur an attendant in the caravan so that the Wall Street man could be provided with breakfast or light refreshments during his commuting journey. But, breakfast over, was it work while the wheels rolled or did McDonald find other diversions to take his mind off the dealings on Wall Street?

That ‘bridge’ at the front of the caravan over the hitch – which incidentally employed a tire to act as a shock absorber – was fitted out with the kind of instrumentation one would find on a flight deck. There was a compass, an altimeter, speedometer and a barometer – also those swiveling spotlights. Can we guess? It was McDonald the money man who toiled at the thirties forefather of the laptop on his way to the office. Going home it was ‘Captain’ Hugh, letting his hair down after a hard day worrying about the next dollar, who navigated his craft from the pilot’s seat way below the clouds.

You can find this Land Yacht and its Blue Streak buddy in in the Dutch National Motor Museum: Het National Automobiel Museum, Steurweg, 8, Raamsdonksveer.

Attempts at roadable aircraft have been made since the advent of the airplane itself. Only fourteen years after the Wright brothers first flew, Glenn Curtiss tried to develop a flying automobile. His design was exhibited at the 1917 Pan-American Aeronautic Exposition in New York. This vehicle was abandoned after the flight characteristics were deemed unacceptable.

Curtiss created a lavish “motor bungalow” as early as 1919. In 1928, he revamped his design and called it the Aerocar. It looked, on the outside, like a fancy horse trailer. It featured four berths, a galley, running water and an “observatory cockpit with a glass roof,” according to Wheel Estate, and cost a whopping $2,500.

The Aerocar – sophisticated, streamlined, and lightweight – was the precursor of today’s travel-trailer. It was pneumatically hitched to the car with a flat rubber donut in a steel box, cushioning shock forward, back, up, down, and sideways. The Curtiss Aerocar Co. was a thriving business into the late 1930’s (old friend Hugh Robinson was its 1930’s president). In August, 1928, Curtiss pulled an Aerocar (above) Miami-New York, in 39 hours!

In 1898, John A. Schroeder, a young Swedish engineer emigrated to the United States and became involved in the birth of the American automobile industry as, first, the chief engineer for the Standard Roller Bearing company and later, the vice president of sales and engineering for the Elgin Motorcar Company and then, general manager of Wills-St.Claire, Inc., another early auto manufacturer. Being attracted to the infant activity of trailering, he built his first trailer in 1922 for personal use, and quickly became an enthusiastic promoter of the embryonic industry that was being poorly received by many Americans.

In 1928, Schroeder left the automobile industry behind and became the principal owner of the Detroit Aerocar Company, an early fifth-wheel manufacturing company licensed by Glenn Curtiss, inventor of the fifth-wheel hitch and owner of the Curtiss Aerocar Company headquartered in Florida. The two fifth-wheel manufacturers of the late twenties were among the very first companies in the nation whose production was entirely dedicated to the infant RV industry.

In 1935, Schroeder sold his interest in Detroit Aerocar, left trailer manufacturing behind and entered the supplier side of the exploding industry. He became the head of sales for the trailer division of the Liggett Spring and Axle Company (predecessor to today’s S.H. Liggett Co.). In this position he became one of the first outspoken proponents of industry quality and safety standards.

In 1938, he had written, referring to his acquisition of Detroit Aerocar ten years earlier, “After studying it from all angles, I determined that there was a great future for trailer coaches and that a new industry was making its debut. For several years many of my friends took great delight in kidding me about fooling away my time and money. They were thoroughly convinced that people would not drive on the roads with that thing dangling about back there. It has become a matter of pride with me to prove them wrong”.

This ultra-streamline Reo tractor was specially built to tow a Curtiss Aerocar, on of the earliest production fifth-wheel trailers. Custom built for Dr. Hubert Eaton of the Forest Lawn Memorial Parks, its innovative cab-forward aluminum and leatherette body was constructed by Standard Carriage Works of Low Angeles, a coachbuilder that specialized in bodies for trucks and other commercial vehicles. It featured a large storage area, sleeping quarters for the driver, and a separate four-cylinder engine for auxiliary power. A Williams air-brake an dual rear-wheels accommodate the permanently attached 10,000 pound trailer. First equipped with a flat-12 White truck engine, the Reo tractor was fitted with a 300-horsepower Cummins 6-cylinder diesel in 1953 when the original engine wore out after more than 250,000 miles of use.

The luxurious and expensive Aerocar trailer was built by Curtiss of Coral Gables, Florida, a firm also known for motorcycles and pioneering aircraft. Nicknamed “Vagabond” by Dr. Eaton, it was outfitted for hunting excursions and to transport company executives on trips to inspect various real-estate holdings. Special features include a self-contained restroom and kitchen, comfortable seating for eight, cup holders, and an observation deck equipped with a speedometer, compass, and intercom for communication with the driver. Though currently set up for day travel, the interior can be modified to sleep up to six passengers. The dramatically styled rig was in regular use until retired by Forest Lawn Memorial Parks in 1991 – Peterson Automotive Museum

A trailer business of a different sort is largely monopolized by Aerocar Co. of Detroit and Curtiss Aerocar Co. of Coral Gables, Fla. These two completely separate concerns control patents originally obtained by Glenn Curtiss, specialize in custom-built trailers costing from $1,000 to $5,000. Known as the “Rolls-Royces of the industry,” Aerocars have been bought by W. K. Vanderbilt, Joseph E. Widener, Philip K. Wrigley, many another tycoon with an itching foot. U. S. Ambassador to Denmark Ruth Bryan Owen toured Europe in one. Oilman Henry L. Doherty owns two, also owns much Curtiss Aerocar Co. stock. 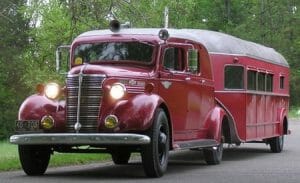 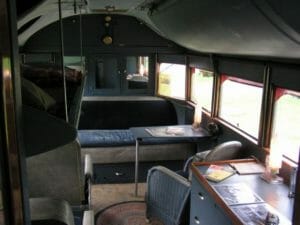 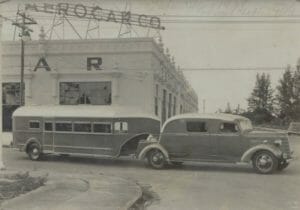 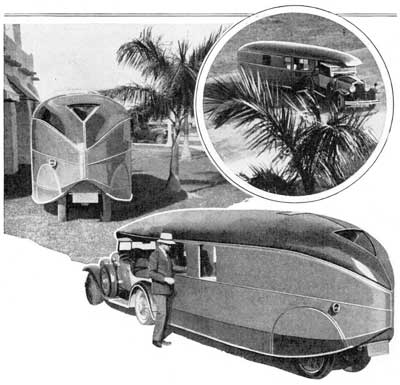 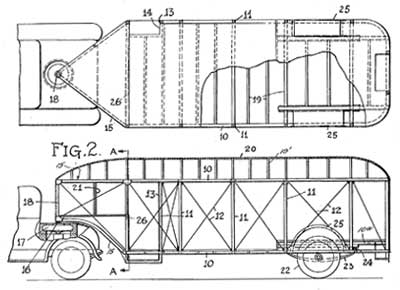 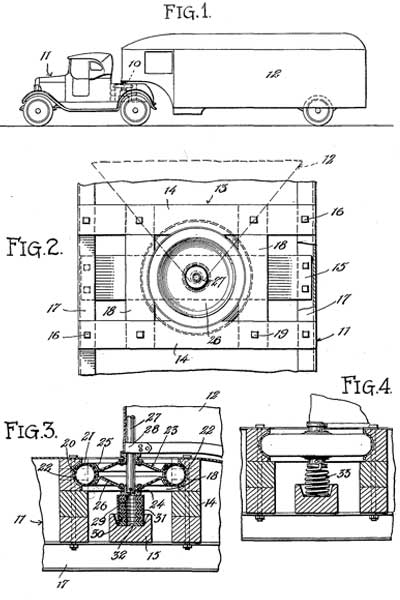 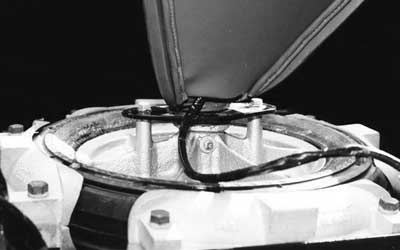 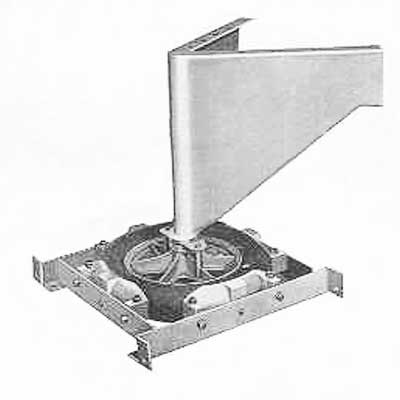 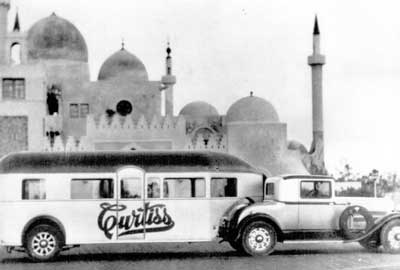 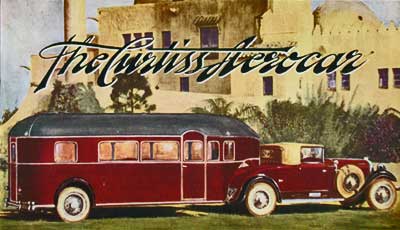 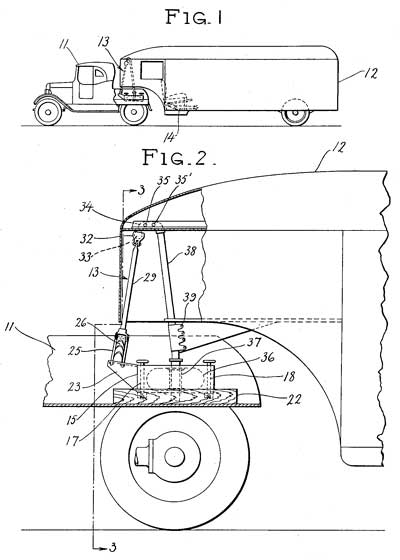 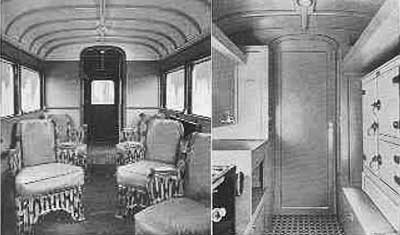 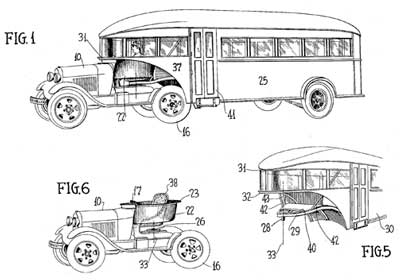 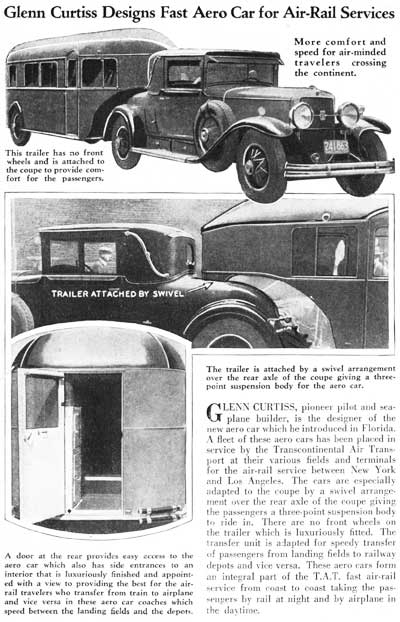 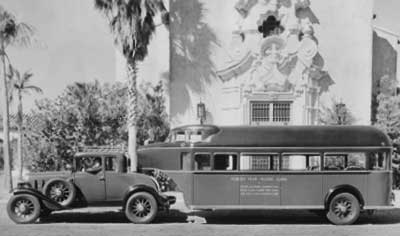 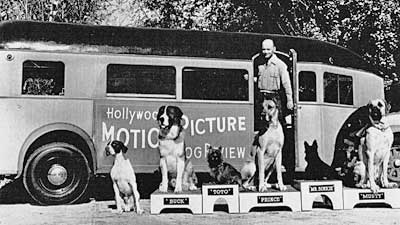 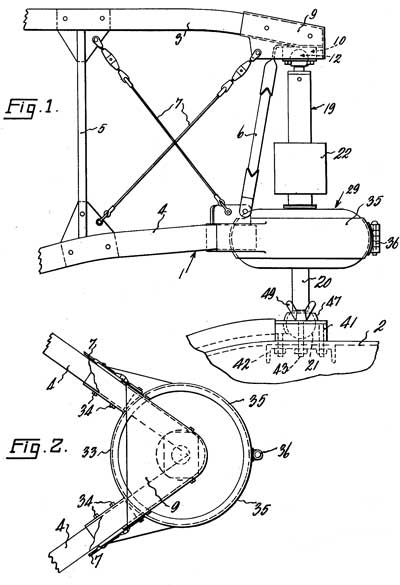 A little googling turns up a page on coachbuilt.com on Standard Carriage Works of Los Angeles, which built the truck on the Chevrolet 1-ton chassis before sending the truck to Coral Gables, Florida, to pick up the Aerocar trailer:

The second (streamlined fifth-wheel tractor that Standard Carriage built in 1938) was built for pioneer balloonist and aviator Augustus Post, a close personal friend of Glen Curtiss, the designed and manufacturers of the Aerocar 5th wheel trailer. Built using a 1938 Chevrolet 1-ton truck cab and chassis, Standard Carriage Works constructed an attractive ash-framed body which included a large storage area behind the driver’s compartment. The rear sleeping quarters and 4-cylinder generator found on the Reo (the first streamlined fifth-wheel tractor built in 1938) were not included on the budget-priced Chevrolet tow vehicle.

The vehicle was later used by the Los Angeles Biltmore to transport hotel guests on weekend excursions. It was later acquired by the Santa Monica branch of Republic Van Lines after which it was purchased by Hollywood stuntman Robert Breeze (aka Wolf River Bob).

Curtiss also has a page on coachbuilt.com, but I’ve yet to come across an address for that cool building in the background of the Coral Gables photo.

This travel trailer was built in Michigan by the Aerocar Company of Detroit. These trailers were manufactured commercially at several locations in the U.S.A. at facilities that were licensed by the Aerocar Corporation.

This style of travel trailer was invented in about 1927 by Glenn Curtiss, a leading American aircraft designer. By using airplane principals he felt that he could build a trailer that was lightweight, but strong enough to travel over country roads.

The trailers’ long streamlined bodies had a framework made of vertical oak struts and horizontal longer that were connected by diagonally crossed nickel steel airplane truss wires. These wires had turnbuckles that were used to “tune” them to maximum tension thus giving rigidity to the structure. Because of this design, the trailers had no actual chassis.

The wheels on the trailers were placed at the extreme rear end and the front had a long, curved V-shaped prow with a hitch that rested in the rear deck of a coupe or roadster. The hitch utilized a “Glenn Curtiss Aero Coupler”, which consisted of an airplane tire and wheel mounted horizontally. This arrangement was an effective cushion against road shock.

The trailers were covered on the outside with fabric which was stretched tightly over tempered Masonite panels. All Curtiss Aerocar trailers were custom made, one at a time according to the customer’s specific requirements. This 22’ trailer was build for William Gray, a Canadian whose father, Robert Gray had pioneered the production of Gray-Dort automobiles in Chatham, Ontario.