Glendale Mobile Homes Ltd, now Glendale Recreational Vehicles of Strathroy, Ontario, made it’s first “RV” in 1950. They now claim to be the largest RV manufacturer in Canada, and that more Glendale’s are sold in Canada than any other RV. They estimate that 120,000 Glendale RVs are currently in use in North America. Unfortunately Glendale has lost touch with it’s historic past through the tragedy of a large scale factory fire in the 70’s, losing all records, and thus is unable to assist with enquiries about vintage models.

**From an interview with the Founder of Glendale, October 1986 in Strathroy, Ontario:**

Glendale was founded in 1950 by Reginald Lever Thorn a trailer builder from England who arrived in Canada around 1948. Reg with his wife Joan and their first child (son , Jeremy) and friend Vic Gray travelled to various areas of Canada including BC and the East Coast. After much deliberation they settled for an area in Southwestern Ontario. The first plant was located on the Glendale Curve in London, Ont. Today the area would be know as Wharncliffe Road and Southdale. This first plant which was a barn burnt down in 1956. From here Reg relocated Glendale to it’s present day location of 145 Queen St in Strathroy. Reg with the help of many dedicated employees like Wally Callaghan grew Glendale to a be national manufacturer of both RV’s and Mobile Homes right across Canada:

-1959 Glendale Mobile Homes Ltd opened a division in Wetaskiwin Alberta producing both homes and travel trailers. -1961 Glendale Atlantic Ltd was opened in Sussex New Brunswick by John De Winter and Reg Thorn. -1961 Glendale acquires the McGuiness Homes name and begins building the Golden Falcon line of trailers -1965 Glendale Quebec Limited opened a plant in St. Joseph De Beauce producing homes and travel trailers -1966 Strathroy plant destroyed by fire and rebuilt to what is today the current facility @ 145 Queen St. -1968 Glendale expanded once again out west with a plant in Morris Manitoba and started it’s Terrapin Commercial Building Plant across the road from the Strathroy Plant on Queen St. -1969 Glendale acquires property in Australia and began Glendale Homes Pty. Ltd which is still in operation today but not affiliated with Glendale in Canada -1971 Glendale acquires Pre-Built Ltd of Lethbridge Alberta and with this the Scamper line of Recreational Vehicles -1973 Glendale Mobile Homes Ltd. becomes The Glendale Corporation with manufacturing locations across Canada for both manufactured housing and recreational vehicles of various sizes and shapes. -1975 Reg Thorn sells Glendale to Morgan Firestone of Oakville Ontario. Between 1975 and 1978 Morgan re-engineers Glendale into a streamlined company focusing only on the RV business and only from the Strathroy Complex. All other business units were sold off and or closed due to discontinuing of less profitable operations.

Prepared by Lou Hammill from an interview with Reg Thorn at his home in Strathroy, Ontario 1986 for a project presented at Sheridan College, Brampton 1987.

1950-1975 units were built by Reg Thorn’s Glendale Mobile Homes Ltd. In 1973 Glendale underwent some major changes of growth and expansion and was re-named Glendale Corporation as the had evolved to much more then just producing mobile homes.

In 1975 Glendale was sold to Morgan Firestone of Oakville Ontario. Firan Corp of Oakville amalgamated with Glendale in 1978 creating a new company called the Firan-Glendale Corporation. Between 1978 to earlier 2000’s Glendale’s parent changed it’s name a number of times. Today Glendale RV is owned by Glendale International Limited based still in Oakville Ontario.

In 2003 Morgan Firestone sold his controlling interest of Glendale to his senior management team. Operations of Glendale International Ltd continued until the voluntary bankruptcy in Jan 2010.

I have just demolished a 1964 Glendette travel trailer for parts. It must have been a delux model, it had a fold out shower room a water heater, and all matching robins egg blue appliances. The serial # is 1494 and it was built in Wetaskawin Alberta.

Many Others? (Add those you know of)

Glendale pride themselves on not being mere “assemblers” of travel trailers and RVs, but true manufacturers, with the majority of components manufactured on site. Thus allowing total control over the quality of their units. This would mean that Glendale trailers have unique features and avoid the “cookie cutter” look of some other “assemblers” units.

During the 1960’s Glendale featured unique hidden storage compartments on their Glendette and Golden Falcon models. The idea was implemented by Reg Thorn as a unique feature to their manufacturing.

Glendale began molding plastic components themselves in the early 60’s due to a plastic shortage for water and septic tanks. To this day Glendale has the ability to mold anything out of ABS through their vacuum forming machine in their Strathroy Ontario facility 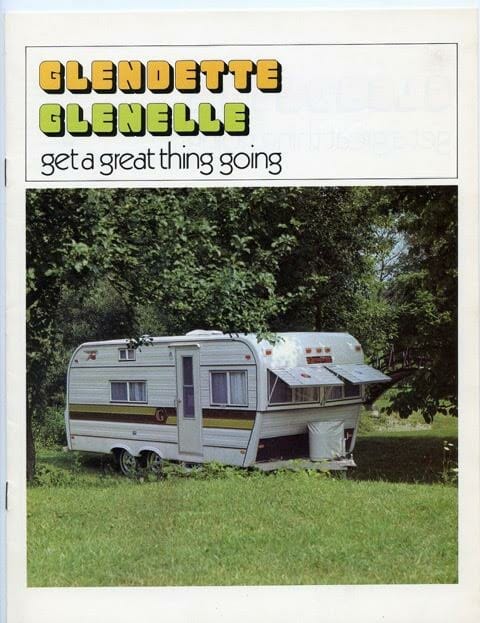 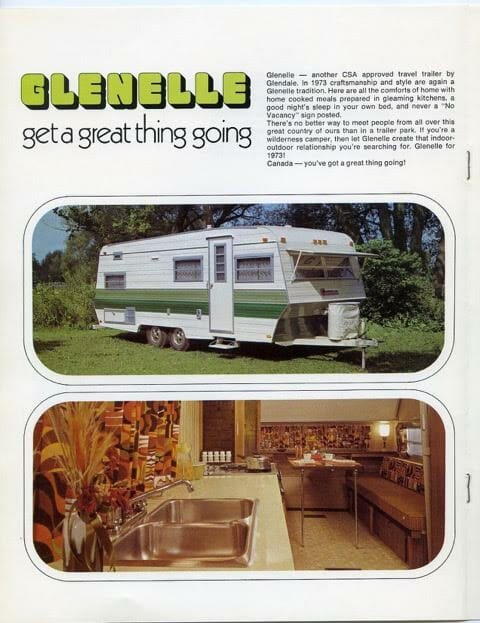 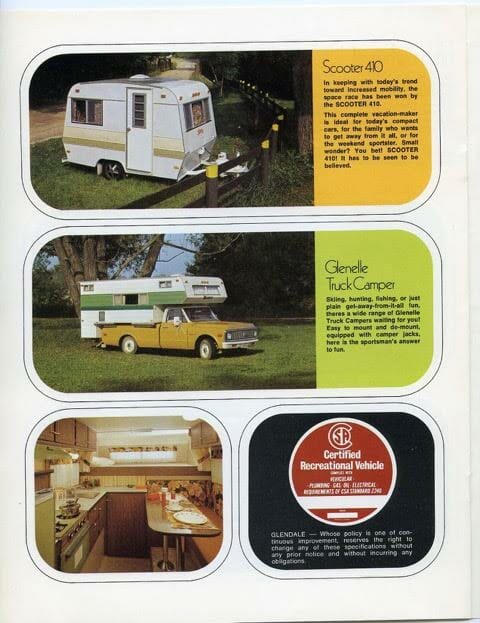 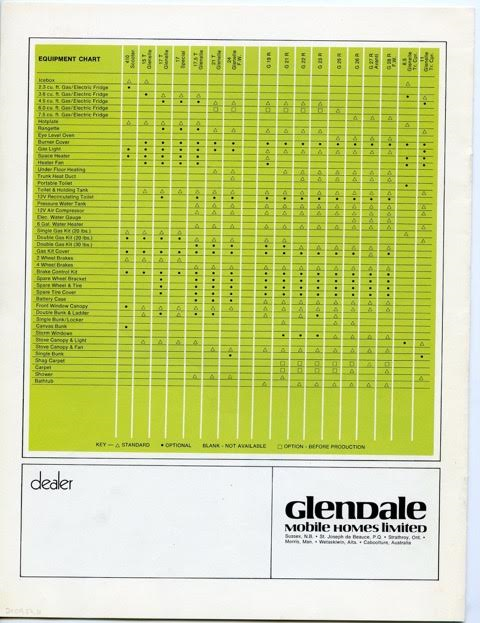 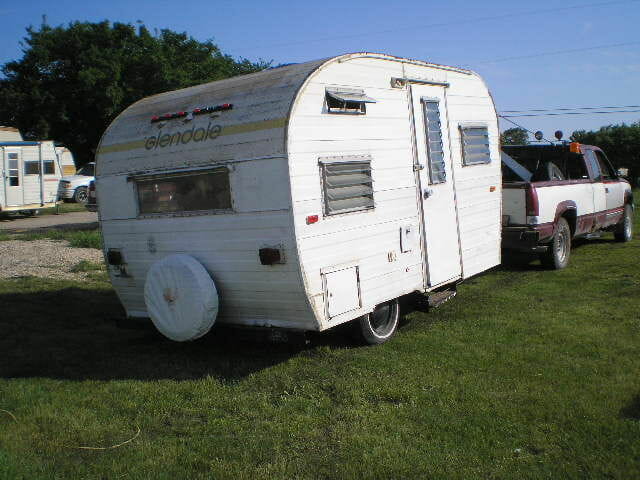 Glendale Emblem – They were originally Silver 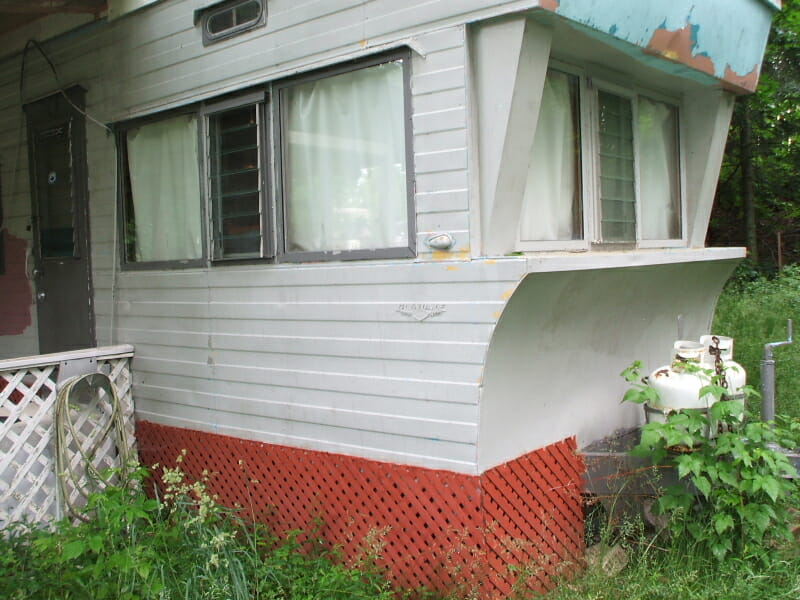 RoadWarrior’s 1968 Orbit in need of some TLC…

The above trailer is NOT owned by Roadwarrior. I own it. It was owned by my Aunt and Uncle when this pic was taken. The purple splotch was from a paint sample as my uncle thought it would be funny to paint it Barney purple. We’ve since restored it. It is a 50’s model manufactured in London, Ontario prior to Glendale moving to Strathroy. Thus it is not a 1968 Orbit.

http://pinterest.com/summercottage55/my-vintage-trailer/ This is a 12 foot ’69 Glendette…*If the message “We couldn’t find that board” comes up just disregard and click “Okay”. Scroll down to board titled “Betty – My Vintage Trailer”.