The answer is probably not what you might have thought. The Airstream Bambi got it’s name in Africa! Wait, what?

According to the Airstream company:

The first 16-foot, single-axle Airstream travel trailer was created in 1961. It earned the “Bambi” nickname on the famous Cape Town to Cairo Airstream caravan through Africa, led by Airstream founder Wally Byam. When Wally learned of a miniature deer revered by the Angolan locals, known for its strength and sure-footedness, it was only natural that it became the trailer’s namesake. The beloved creature was called “O’Mbambi” in the Umbundu dialect of the Bantu language.

Former Airstream Director of Sales C.H. Manchester put it best in a letter to Airstream dealers that year when he said, “Bambi means speed. Bambi means stamina…and, most important of all, Bambi means full Airstream quality, engineered and proportioned and thoroughly travel-tested.”

We also didn’t realize that Bambi started out as a nickname and not a model:

The first single-axle Airstream travel trailer launched in 1961, and it was affectionately nicknamed the “Bambi.” Today, we apply the Bambi name to all single-axle Airstream travel trailers, as a distinction for people who are looking for our most agile and, honestly, adorable models. They’re immensely popular, not just because of how they look, but also because they’re easy to tow and incredibly versatile – proof that great things really do come in small packages.

Regardless of how and why the Airstream Bambi got it’s name, everyone loves the tiny Airstream. How could you not? It’s just too cute!

First year for the popular Bambi, it replaced the 16 foot Pacer from a year before, but with a whole new body, axle and layout. The trailer was not customizable, and the Bambi remains much the same for all three years. The optional Jalousie window in the door vs. a vent door, and double vs. twin street side bed was about the only options. For 1961 and 1962, the easiest way to tell a California from Ohio Bambi is the location of the toilet – street side from California, curbside from Ohio.

A total of about 1100 Bambi’s were made between California and Ohio, not counting the 1964 Bambi II’s.

The Bambi is one of the most popular of all the Airstreams, owing to its diminutive size, cute factor, the fact it was totally self-contained with a very livable layout for two people and was ideal for weekend trips. The Bambi was also offered as an inexpensive Airstream of the time, and as a result, many of the “as-found” trailers are in very sad shape and can cost up to $10,000 to restore. It is not advisable to overly customize or change the Bambi layout, as that seems to wreck any resale value. Very popular with the vintage car group. 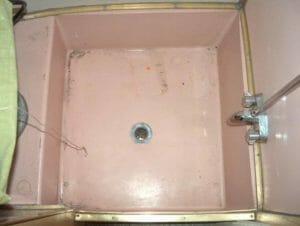 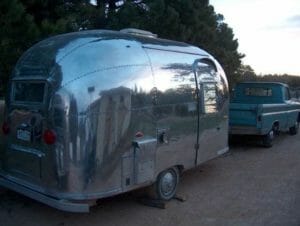