Ace Traveler was founded by Constant (Cuba) & Jane Pereira in 1960. Their first trailers were built using a two car garage and a small barn located on route 1 in Wells Maine. Constant and Jane were professional dancers preforming Latin and ball room dancing world wide. They even preformed in Al Capone’s Chicago Night Club. After retiring from dancing they founded the Easy Travler Trailer Company in Elkhart Indiana but shortly after founding Easy Travler they sold that company in 1959 (which continued with new owners). Soon after selling Easy Travler Constant and Jane decided to start another travel trailer company but with the new idea of using patterned (quilted) aluminum for the interior walls and ceiling. By 1960 they had founded their new travel trailer company called Ace Traveler They soon discovered that their new idea of full aluminum interiors created a travel trailer that was 10 degrees cooler in the summer and 10 degrees warmer in the winter compared to conventional travel trailers with all wood interiors. Ace would be one of the first companies to use aluminum for the interiors of their trailers. Ace was also the first company to offer a life time warranty with their new trailers.

By 1962 Ace had outgrown their original location and leased a much larger farm with barns out on Route 1 in Saco Maine. Located near ‘FunTown’ today.

During the early 60’s Ace Trailer production was around 10-12 trailers per week and the company offered models sized 13′, 15′, and 17′. Ace also traveled to Elkhart Indiana and Pennsylvania every two weeks for all their supplies.

In 1964 demand for trailers required another move to an even larger facility. Ace leased the Old Shepard and Morse building at the intersection of Route 111 & 202-4 in Alfred Maine. More workers were hired bringing their workforce to 18 employees. Ace also had a storage lot in Numidia, PA with two salesmen who sold to dealerships around the country. Ace only sold to dealerships and not to the public directly, but any local buyer could purchase from a dealership and personally pick up their trailer at the factory. in 1964 production increase to 20-25 trailers per week.

By 1966 Ace had the need to grow even more and finally purchased their own location on Route 111 in Alfred Maine. (Present location of the George Roberts Company) Ace employees built the building their selves starting with the welding and painting building in the Spring of 1966. Fall of 1966 Constant Pereira designed the main factory building his self and construction was once again completed by the factory employees with the exception of the foundation work and the cane work placing the roof trusses in place. Spring of 1967 the new factory was complete and in full operation.

Late 1960’s Ace Traveler Corporation created the ‘Ace Capader Club’ which was an exclusive camping club for all owners of Ace Trailers. Several ‘Safaris’ were held each year including some to the tropics of Mexico and the ski slopes of Canada.

At the height of production Ace employed as many as 60 employees and could produce up to 20 trailers per day if orders required. Two tractor trailers were on the road full time hauling supplies and delivering trailers across the country.

*In 1971 the Ace Corporation was sold to Monitor Coach Company Incorporated out of Wakarusa, Indiana. (A subsidiary of Wickers Corporation). Monitor continued the Ace line of trailers until early 1974 then the Ace line was closed down.

Ace Traveler’s Founder Constant Pereira passed away on August 22, 1972 at the age of 65.

Over the years Ace built travel trailers from 13′-24′ and Slide in Truck Campers for short and long bed trucks. 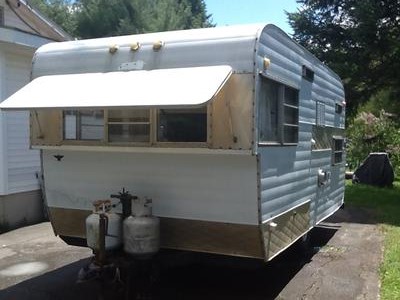 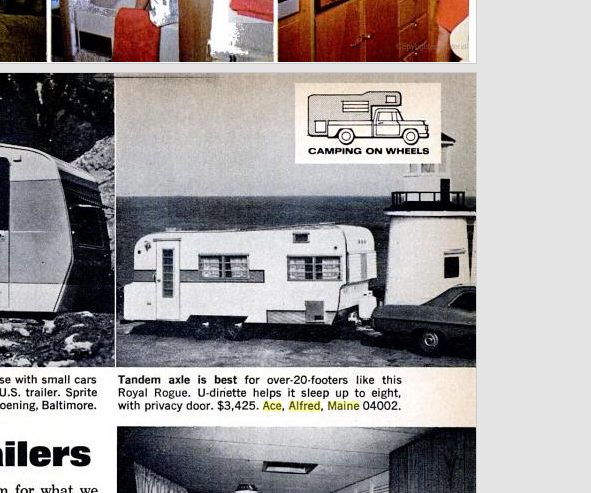