Wally Byam, airstream’s founder, was practically born a traveler. As a young child he traveled extensively with his grandfather, who led a mule train in Baker, Oregon. Later, as an adolescent, he was a shepherd, living in a two-wheeled donkey cart outfitted with a kerosene cook stove, food and water, a sleeping bag and wash pail. These early experiences no doubt contributed in large part to the direction his life would eventually take.

After finishing high school, Wally signed on with the merchant marine, serving three years and working his way up from cabin boy to ship’s mate. upon returning to the us, he entered Stanford University, working his way through school and, in 1923, earning a BS in History.

Wally found work in the rapidly growing advertising business, first as a copywriter for the Los Angeles times and then as the owner of his own agency.

Soon he switched to the opposite side of the street and became a publisher, starting a number of magazines. one of these, a do-it-yourself magazine, published an article describing plans for the construction of a travel trailer. When readers began complaining about the plans, Wally tried them out and found himself agreeing with his readers – the plans were no good.

Thereupon, he set out to build his own model, and while he considered it primitive, it was widely admired and Wally began selling sets of plans for five dollars.

Soon, in response to demand, he was building improved versions of his trailer in his backyard in Los Angeles. Sales were good. Wally’s great innovation was to drop the floor down between the wheels, allowing him to raise the ceiling, making it possible for the campers to stand up straight when inside the trailer.

Americans were beginning to take to the roads in greater and greater numbers, and wally’s new trailer was a hit. The fledgling business survived the crash of 1929, and by 1930 he had abandoned law, advertising and publishing to become a full-time builder of travel trailers.

Those first trailers were built of plywood, but he soon switched to masonite and began adding amenities like ice boxes, gasoline stoves and water pumps.

The trailers began to take on a more aerodynamic look as he incorporated aircraft construction methods in order to lessen wind resistance and improve the strength-to-weight ratio of his trailers. In 1934, Wally Byam introduced the name ‘airstream’, and an American legend was born.

In 1936, the airstream trailer co. introduced the ‘clipper’, with its monocoque, riveted aluminum body, it had more in common with the aircraft of its day than with its predecessors.

It could sleep four, thanks to its tubular steel-framed dinette which could convert to a bed, carried its own water supply, had an enclosed galley, and was fitted with electric lights throughout. The ‘clipper’ boasted of its advanced insulation and ventilation system, and even offered air conditioning that used dry ice.

It was expensive, especially during the depression years, yet the company could not build them fast enough to keep up with the orders that poured in. And the meticulous attention to quality would prove crucial.

Of more than 300 trailer builders operating in 1936, only one, airstream, would survive.

In 1941 leisure travel and the materials necessary to build trailers both became luxuries the country could not afford. Structural aluminum was classified as a critical war material, available only for the building of vital aircraft. Tires and gasoline became scarce.

Wally Byam closed his doors and took his experience with aluminum fabricating first to Lockheed, for the duration of the war.

With the war’s end, the economy boomed and consumers began demanding more of the goods they had been deprived of. Wally had learned much about aluminum fabrication and design in the aircraft industry, and he was ready to begin applying that knowledge to his trailer concepts. for the next ten years, he continued to improve and refine his products, and the company continued to prosper and grow.

In 1954 Wally Byam had created the Holiday Canned Ham Trailer.

Wally Byam created the Wally Byam Caravan Club in 1955 and put his cousin, Helen Schwamborn, in charge of it. Wally organized and led several “caravans”, including the famous Capetown to Cairo caravan in 1959-1960.

Wally Byam passed away in July 1962. He bequeathed the company to his wife Stella. In late 1967 the Airstream Company was purchased by Beatrice Foods of Chicago Illinois. In 1978 Beatrice Foods sold Airstream to the current owner, Thor Industries; a group made up of executive types from the RV manufacturing community.

By the early seventies, the popularity of motorhomes had grown by leaps and bounds. After several years of development, the first airstream motorhomes were introduced in 1979. The California assembly facility was closed the same year. The original classic motorhome featured riveted aluminum construction and a monocoque body like the trailer, and brought a new level of aerodynamic superiority unavailable in any other motorhome. In 1989, airstream rolled out the all-new land yacht motorhome. In contrast to the classic, this motorhome featured laminated fiberglass construction and had front and rear end caps so innovative that a patent was granted for them. The land yacht was an immediate success and is still the best-selling airstream motorhome.

An airstream trailer was selected by NASA to house the first astronauts back from the moon and the motorhomes continue today to be an integral part of the space shuttle program.

Over 60% of all airstreams ever built – including some built from the original five-dollar plans – are still rolling down the highways. 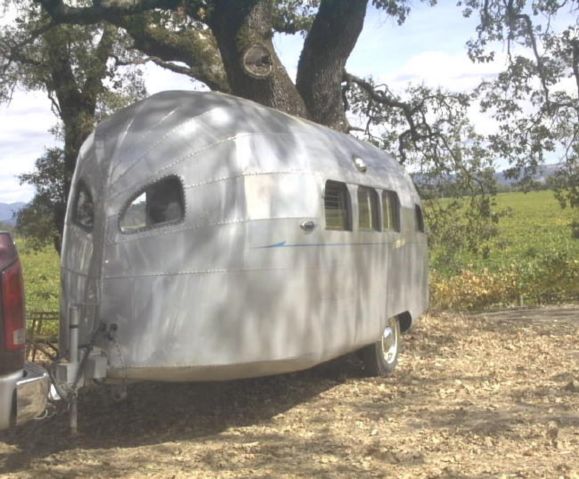 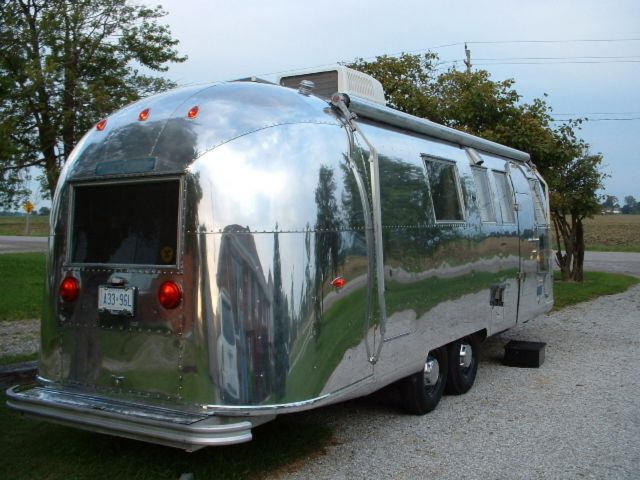 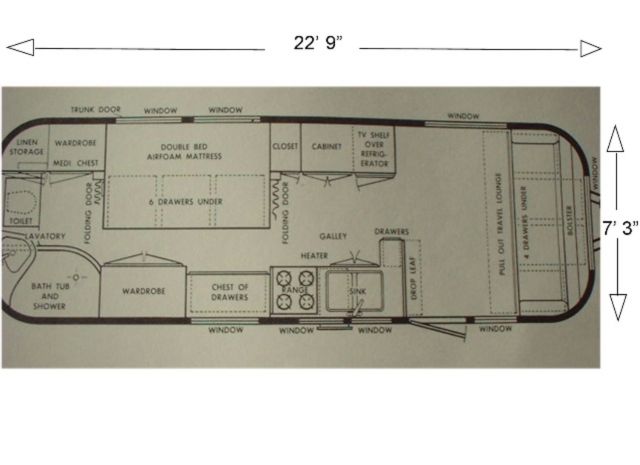 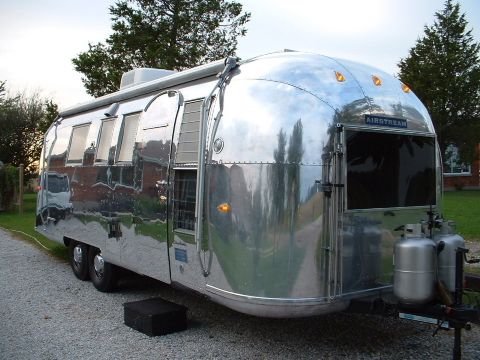 Dayton Taylor, So. Calif. http://www.VintageTrailerCrazy.com, Owner of over 25 restored vintage Airstreams, Silver Streaks, Vagabonds, Boles Aero’s and many others each with its own unique theme. Email at daytontaylor@vintagetrailercrazy.com

Sylvia and Larry of ON, 1964 Overlander.

There is a good list of Airstream models specifications here.