Argosy trailers were made by Airstream Company starting 1971 in Versailles, OH. near Jackson Center and are usually recognized as “Painted Airstreams”. A small percentage were also manufactured in the California Airstream factory. These can be recognized with Airsteam instead of Argosy on the VIN plate. Many features were first tried out on the Argosy models, and then incorporated into the more traditional Airstreams if they were a success. A good example is the large front wrap windows. These painted trailers utilized one piece steel end caps with the remainder of the trailer body aluminum panels. It is rumored that because they were painted they used damaged or blemished aluminum panels from Airstreams. Regarding the use of damaged aluminum skin panels under the paint.  That was hit or miss.  Some Argosy’s have been stripped and Bondo skin repairs found, but thankfully, Airstream did not damage that many panels, so for many if not most Argosy’s, perfect aluminum is found when they are stripped.

Argosy created a series of diminutive trailers in the late ’70’s called the “Minuet”. These were designed specifically to be towed by cars and were a foot narrower than the standard trailer and made as lightweight as possible. The first years had aluminum floors and even the partitions and dinette frame were sheet aluminum. These were made in 3 sizes from 1977 to 79. The 6.0 Metre (20′), 6.7 Metre (22′), and 7.4 Metre (24′) Minuet.

Beginning in 1974 Airstream began manufacturing a Class A motorhome, badged “Argosy”. These began as painted aluminum 20- and 24-foot models and were followed in 1979 by the first of their Classic model motorhomes, with an unpainted aluminum body, much like the trailers they are known for. These utilized the same body construction as the trailers but were built to be mounted on a truck chassis.

Airstream began building the Argosy plant in Versailles, OH in September 1971.  The first Argosy trailers were shipped to dealers in April 1972 and are serial numbered as 1972 models, indicating a short 1972 model year.  Significant Argosy advertising probably commenced for the 1973 model year, though.

The first Argosy motorhomes were built for the 1974 model year.

Corrections and details provided by:

Here is some information about the Argosy line of trailers and motorhomes. Charlie Burk said,

“Argosy began possibly around ’71 thru late ’70s early 80’s. The Argosy motorhome started in 1974 and production stopped in 1979. They were built in a separate facility in Versailles, OH. In 1979 there were three models of motorhomes built. The Argosy, a painted Airstream (truly an Argosy with Airstream logos and different paint scheme) and the first silver bullet Airstream motorhome.” The Argosy trailers were also built at the Versailles, Ohio plant. Charlie continued,

“You could not actually strip and Argosy and find an Airstream. The Argosy motorhome (and the ’79 painted Airstream) were built differently. The upper rear segment was a one-piece steel segment. True Airstream motorhomes used 5 aluminum segments instead. The motorhome and trailer underwent a significant structural design change in mid 1982. It is not readily apparent except in the trailer lower segments.” The Argosy trailers have the one-piece steel segment in the front instead of the 5 aluminum segments. The Argosy trailers also had slightly different interior appointments, supposedly not as “nice.” Personally, I liked them both, Argosy and Airstream.

One Airstream feature over the years has been tambour doors on cabinets. They were lightweight and looked good. Charlie had this info about them,

“The tambour doors were used extensively by Airstream starting in 1970. They are still used in small applications today. From 70-73 the tambour used was paper backed with a 3/8” strip face. Starting in 74 the tambour was canvas backed and had 1/2“ wide strip face.” Also in the late seventies, all the company operations were moved to Jackson Center, Ohio and the complete Argosy line and name were dropped. The Airstream motorhome continued to be made in the classic silver. 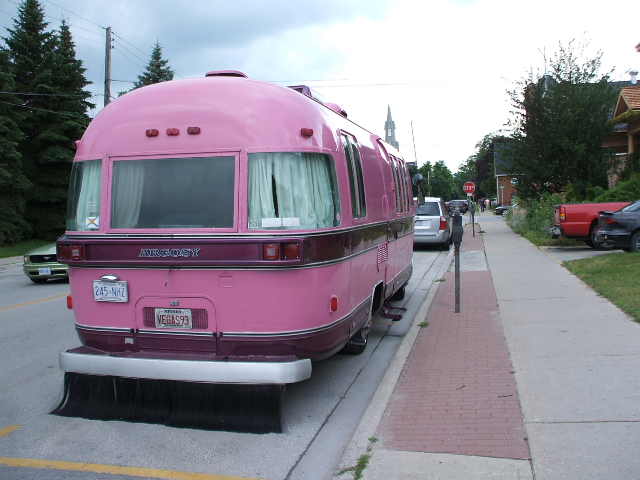 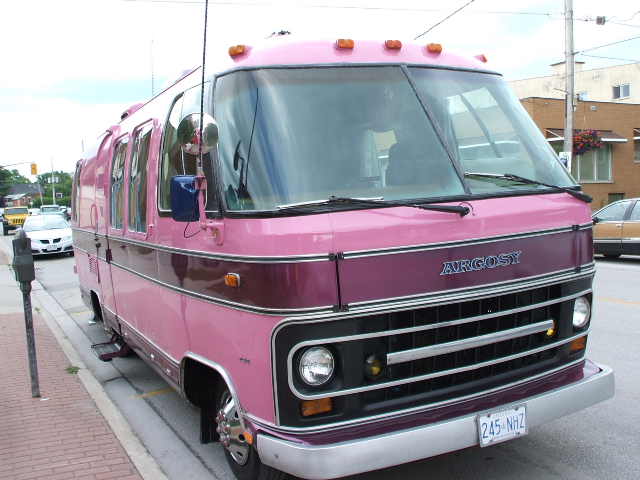 Random reservation at Table Rock State Park put us right next to another Argosy. What are the odds? 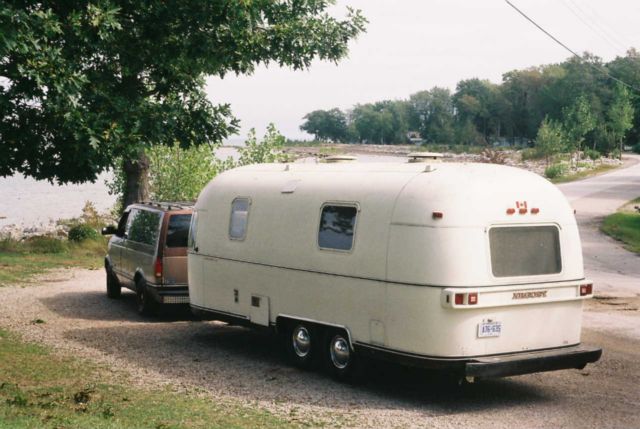 1976 Argosy – FYI, it’s a two twin bed, rear head unit and we love it. The first owner was an American truck driver from Poughkipsie New York, who bought it brand new 30 years ago. The next owner was a Rabbi here in Ontario, who used it as a part of his itinerant ministry in Southern Ontario. The third owner was an Anglican Priest from nearby Ingersol. For him and his wife, it was a tow car for his ’47 purple Desoto four door with a chopped top. Jan and I bought it five years ago and have drug it to several campsites here in SW Ontario. It’s been christined “Holy Roller” because of it’s history.