RAY FRANK FATHER OF THE MOTORHOME

In 1958, Ray Frank, owner of a small trailer manufacturing company in Brown City, Michigan, a small town north of Detroit, on Michigan’s east coast, designed and built a small custom “house car”, as self-propelled RVs had been identified since they were first conceived about 40 years earlier. It was a vehicle that he intended solely for his family’s personal use and enjoyment. He and his family called it their “motor-home”. The coach was unique, at the time, in that it was designed from the ground up to be a motorized recreation vehicle, it was neither a trailer to which additional wheels and an engine were added, as were some of the early model “house cars”, nor was it converted from an existing bus or truck chassis. It was also unique in that it was the first recognized time that the term “motor home” was applied to a motorized RV, thus beginning the transition from the description “house car”, which had been in common use for over 40 years, to the name universally recognized today.

This very first “motor home” proved to be so popular with everyone who saw it on the road or in campgrounds that, after a few travels with his family, and considerable looking for available component suppliers, Ray went directly to the Dodge Division of Chrysler Corporation to investigate the bulk purchase of bare truck chassis on which to produce more of his coaches. Dodge refused to sell its chassis to him directly and referred him to a nearby Dodge truck dealer named Lloyd Bridges with whom he was able to negotiate a contract for his first 100 chassis. “House cars” had been custom made or converted one at a time from other vehicles since the early 1920s but Ray Frank’s new motor homes were also the first motorized recreational vehicles that were built expressly to be distributed through a franchised dealer body. Bridges, in turn, signed on with Frank to become one of his first dealers and the motorized RV dealership that was created by that original order and the ensuing purchase of finished coaches continues today, operated by Mr. Bridges’ sons.

As he got his production of Frank Motor Homes started as a sideline to his trailer business, Ray built 6 units in 1960 and 131 in 1961, when the name was changed from Frank to Dodge Motor Homes. These were, in effect, the first assembly line produced motor homes. For the first 3 years, Frank’s motor home design included a boxy looking aluminum body but with the industry’s first molded fiberglass nose and tail section. In 1963, the universally recognized rounded all-fiberglass body was introduced using a design and renderings created by Ray’s son, Ron Frank, who was only 18 years old at the time but obviously had an eye for style and design. At this time, demand accelerated dramatically and his production quickly increased to over 700 units per year. The new all fiberglass bodied Dodge Motor Homes, which were available in 21 and 27-foot models, took the RV industry by storm. Part of their success was due to the fact that the units were unique enough to be sold not only by established trailer dealers but by franchised car and truck dealers as well. They were also considerably more affordable than the custom units available from most other manufacturers.

Innovative and unusual features in the Dodge Motor Home included a couch that could be converted into a double bunk bed with the back of the couch suspended from the ceiling by heavy straps to form the upper bunk, a double basin, stainless-steel sink, and windshield enclosing drapery for privacy. The demand for the relatively inexpensive motor home continued to grow rapidly with many other manufacturers joining in the production but, by the 1966-67 period, it was still generally accepted that there were more Dodge motor homes registered on the road in the United States than all other brands of motorized RVs combined.

In 1967, Frank Motor Home Corporation was sold to PRF Industries and it became the Travco Division of PRF. From this date on, the coaches were identified as Travco motor homes or as Dodge-Travco motor homes. In 1979, Travco Division was sold by PRF and became a part of Clarence Fore’s Foretravel, Inc., which coincidentally, like Frank’s company, had grown from a single coach privately made and intended for personal use.

Having sold his Dodge Motor Home operation, Frank continued to innovate and improve products in the RV industry. Because he felt that many American consumers wanted a new smaller, more compact motor home that would be easier to drive, easier to park, and comparatively easier to buy, Ray developed the Xplorer brand of van-based motor home. Production of the first Frank Industries “van campers” began in 1968 with a fully self-contained model that would fit in any standard sized residential single garage. This innovation again caught the industry’s imagination and again established Ray Frank as an innovative industry leader with what was the first production “Type B” motorhome.

Having designed his first motor home to be a totally original vehicle from the ground up and neither a modification of an existing truck or conversion of a highway coach, Frank’s design and its overwhelming success set the ground work for the entire “type A” motor home industry of today, as well as lending its identity to an entire, still growing, lifestyle. His production of van-based Mini motorhomes, which at the time had been done only on the German built and under-powered Volkswagen “microbus”, lead to the successful development of an entirely separate portion of today’s RV industry. When his many interior appointment creations are considered in addition to two primary recreational vehicle types, it becomes clear that Ray Frank can truly be identified as the “Father of the Motorhome”.

For his many invaluable contributions to the creation and growth of the modern motor home industry, Ray Frank was inducted into the RV/MH Hall of Fame as a member of the class of 1978.

The first house car to be called a motorhome was on a Dodge truck chassis in 1953. Ray Frank built four of these first units and then raised capital to start “Frank’s Motor Homes.” In the early 1960s Frank connected with Chrysler to market his motorhomes under the brand name of Dodge. The Class A was officially here to stay. The Dodge Travco was king of the industry for two decades creating 21 to 27 foot homes on wheels.

Identifying the origin of species can be a precarious business, as Darwin found out. When it comes to motor homes, it’s easy: one Ray Frank built himself a crude one in 1958, and called it “motor home”.  So that covers the name, but what about the genre? The history of motorized camping vehicles is fascinating, vast, and goes way back to the early years of the automobile. But when it come to picking a starting point for the modern motor home, Ray Frank really does deserve the credit too. His boxy rig turned into the sleek Dodge Motor Home/Travco, and created an industry.

There it is, the sketch that started the whole industry. Looking like something I would have come up during fifth grade Arithmetic class, this one is a bit exaggerated in its length. What I find remarkable is that Frank seems also to have also started the endless tradition of questionable bold graphics on the side of RVs. I didn’t really think it started that far back, and they weren’t so common in the early years, but there it is on that sketch. That stylistic fad went on incredibly long.

Here’s the real thing. Ray Frank built his first one in about 1958 for private use and to test public reaction. A trip to Florida elicited several orders, and he set up a company to make them. He also hooked up with Chrysler to supply the complete chassis and power train. 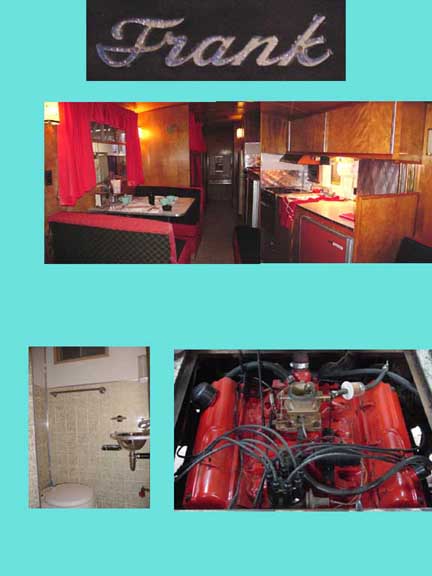 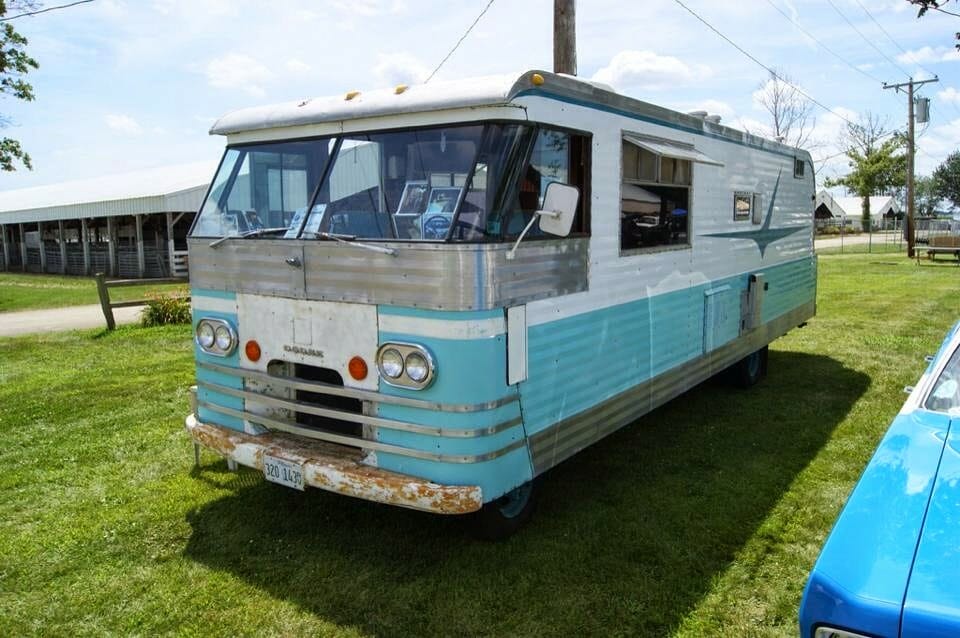 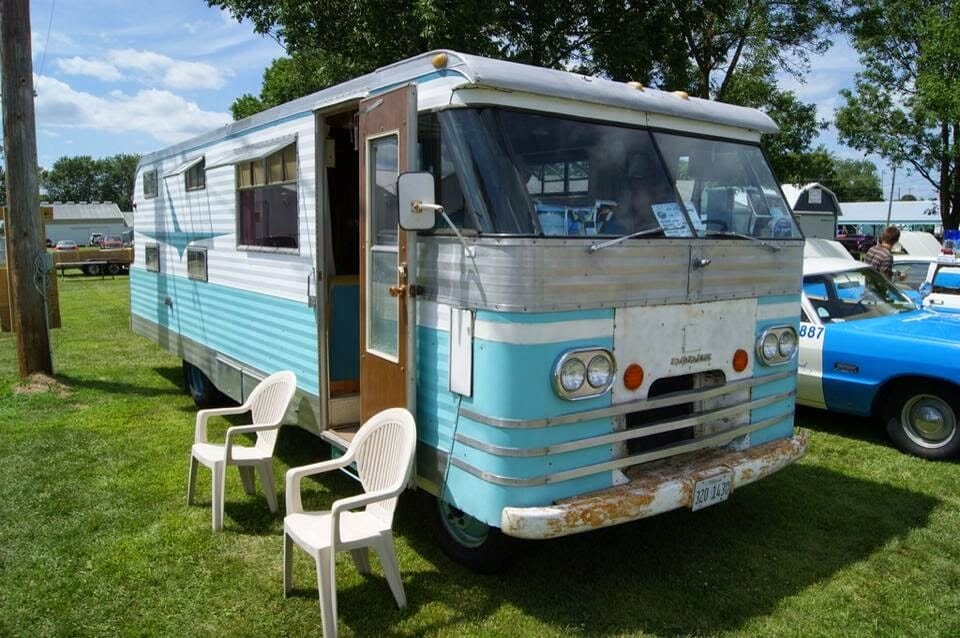 Ken Gibbs Springfield, MA owner of the only known 1961 Frank of the original 131