Small company called DAVE HICKS MOBILE HOMES that was located in Grand Prairie, Texas. Mr. Hicks got his start selling tires in Odessa Texas in the late 30’s. His father founded the Hicks Rubber Company in Waco Texas and his son, Dave, opened two outlets in West Texas. When the war hit, tire sales were frozen, so it stopped most of his business. At the same time, oil drilling in the Permean Basin (includes West Texas) was booming and oil field workers lived in tiny travel trailers.

So Mr. Hicks bought out a travel trailer retail outlet next to his tire business and began putting his tires on the trailers. His business grew and as he looked around for sources to restock his trailer retail lot, he realized that most manufacturing was done in Michigan. So he decided that he had a competitive advantage by building trailers in Texas.

At that time, end of WWII, there was no financing and not insurance for trailers. So he set up a plant in Grand Prairie, Texas and began building trailers. As far as I know, he was the first manufacturer in the Southwest. This was the launch of the Dave Hicks Mobile Home Company. (By David Hicks – Son)

started in 1956 and closed in 1970’s? Dave Hicks Stopped building Mobile Homes Sometime In the 70’s? Then went into the insurance business that was still open as of 2004. Mr. Dave Hicks is no longer living. *We own a 1963 Dave Hicks Mobile Home, so it was still in operation that year.

Very modern with sharp angles and very modern furnishings, Larger units had washers and dryers, Kitchens where very modern, Wood paneling was rather dark and course in texture. 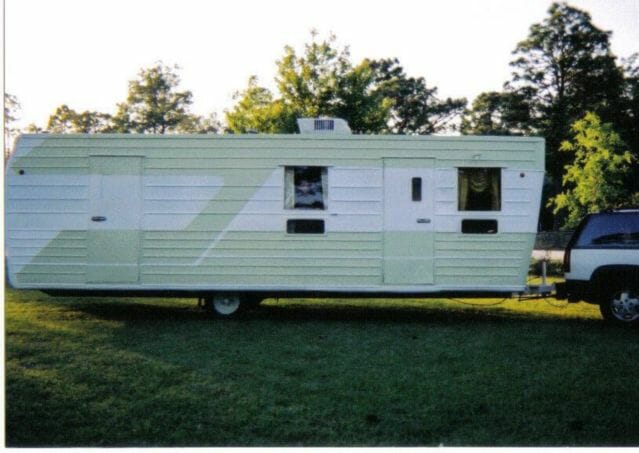 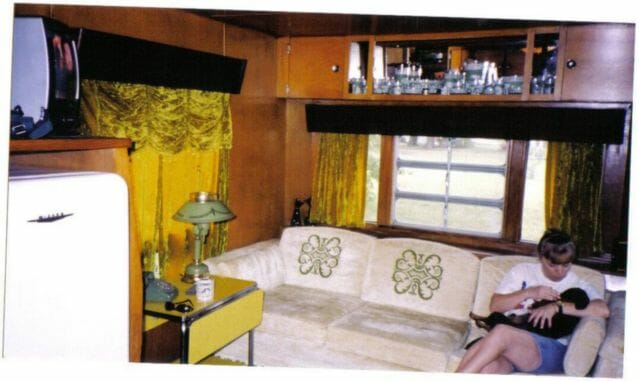 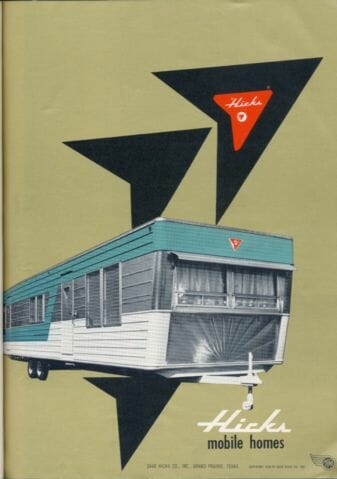 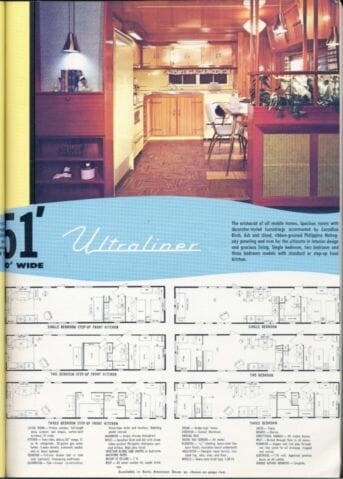 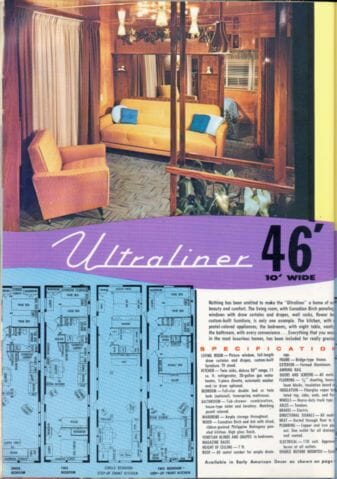 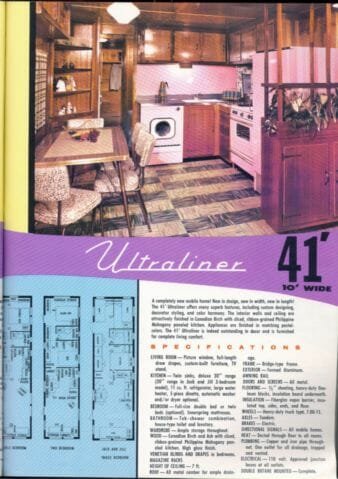 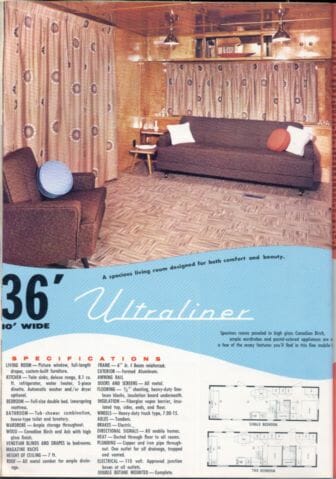 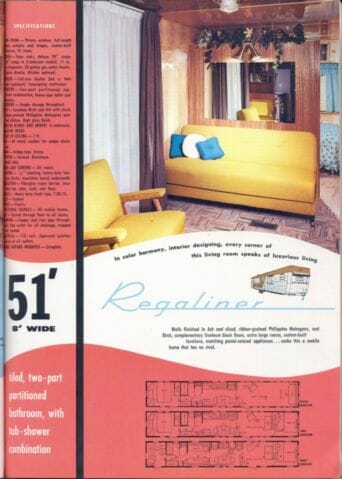 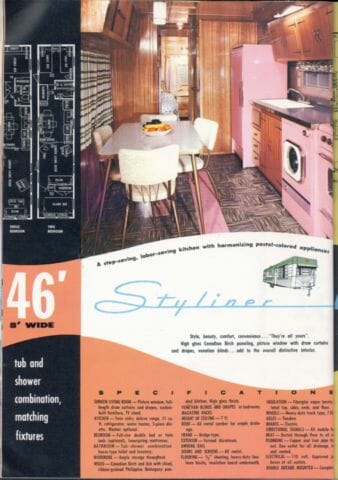 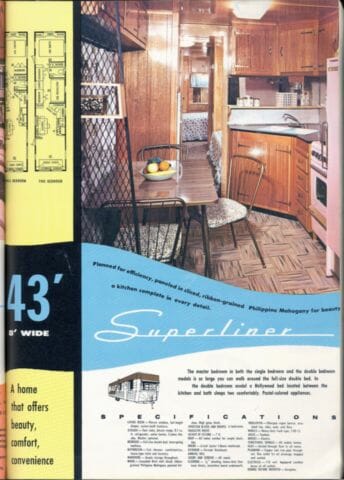 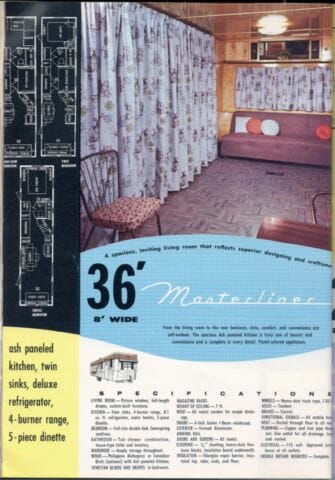 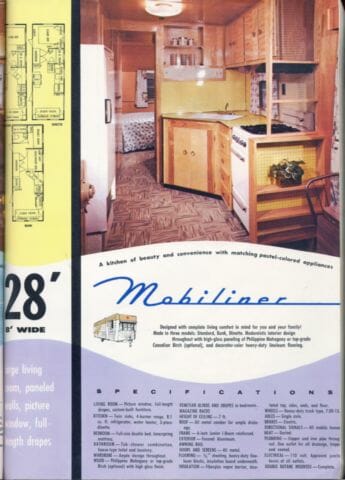 Above Ads are sponsored by Juergen Eichermueller. His Cds can be purchased through ebay seller ID: trailer-dealer All images from His Cd’s (including these used on this page) are under copyright of Juergen Eichermuller.

Tim Heintz (Fiftysixhicks@aol.com)- I have the only know Restored 8’x28’1956 Mobiliner, in Panama City Fl., recently found a 10’x36’ left to rot in a side yard with no windows and no axles NO hope of restoration! UPDATE: Found another 1956 Mobiliner in same shape as the 10’x36′ both located in north Florida

Bill in Texas- I have a 41 ft Ultraliner at Lake LBJ in Kingsland Texas. It served as housing for railroad workers until 1975 and then was moved to another local lake and I bought it and moved it to LBJ around 4 yrs ago. I currently have it listed for sale on Craig’s list and Tin Can Tourist.

Terry & Christi in Arkansas – We have, we believe a 41 ft. We know it’s a 1963 from a label found in the kitchen broom pantry. Not sure how or if I can post pictures here or not. Couldn’t figure it out. Email for pic’s or to help me load them to this site if interested. christip2@suddenlink.net

Saw one today (01/08) in a RV trailer park in Bastrop, Texas currently being lived in so did not take a picture out of privacy for the owner – Does anyone know if the Hicks trailers if built in Grand Prairie were related in any way to Mobile Scouts (I own a 15′ 1957 Mobile Scout) that were built in nearby Arlington, Tx about the same time? They both have the same unique triangular shaped window in the entry door. groldham@austin.rr.com *(The Dave Hicks Mobile Home Co. had no connection to the Mobile Scout Co. There where other trailer companies that had thi triangle shaped window in their doors. Hicks did not use it till 1958. Tim Heintz)

Dusty & D’ann Blackmon in Seminole, Texas – We recently bought a 1958 28 ft Mobiliner in Hobbs, New Mexico and are in the process of restoring. I also spotted what I believe (after conferring with Tim Heintz) is a 1958 8 x 36 Masterliner in Denver City, Texas and am waiting on the owner to decide if she wants to sell. 10/31/12

Chris Cain Victoria,Tx Just bought my first home and it is a 36ft 1956 Masterliner. Im so excited to be living in this wonderful piece of Texas history.I hope to see more posts on here soon. 06/23/17

Jon C. Moon in Blairsville, Georgia (jonmoon @ ridgelinetv.net) – 07-28-2018 – I live in a 1961 36′ Hicks Masterliner. My great uncle, Mell Jackson Breedlove, bought it second hand from a couple who were stationed at Fort Bliss, Texas. They had pulled the trailer all the way to Georgia with a Ford Rambler station wagon. My great uncle bought it from them for $1,400 in the mid sixties.

Until his death in 1980, my great uncle lived in the trailer just outside my grandparents farmhouse in rural Gratis, Georgia (close to Athens). Uncle “Mac” as we called him was a confirmed bachelor. He helped out with the farm work on my grandparents 100 acre cotton farm and dairy operation. Mac previously was in the Army in WWII (stationed at the Presidio in San Francisco, though never was sent overseas) and had worked for Bluebird building school buses.

After college I started working for the local newspaper here in Blairsville. I had the crazy idea of moving Mac’s old Hicks trailer here to live in (about 100 miles away in the mountains). All my relatives thought I was crazy, but I knew it would be a cheap place to live and I had some family land here! My crazy uncle Al “Snakebite” Baker (we all have a crazy uncle, right?) showed up with his work truck to move the Masterliner. About a quarter of the way there, one of the tires came off, rolling down the highway. We came to a stop in front of a small African American church having its service. A group of old black men poked their heads out the doors, probably wondering what these ignorant hillbillies were doing! However, with some rigging up, we made it to the next tiny town, where we ran into the mayor (and owner of the only store open on Sunday) said we could park the trailer right by City Hall until the next weekend. Round two went smoother, with a bigger truck and we made it to Blairsville – albeit taking a much longer route to avoid the steep and curvy mountain gap leading into the county.

Fast forward to now, my Hicks Masterliner has had so much renovation and additions it doesn’t really look like a trailer. A real pitched roof was added early on, followed by wood siding and a front porch. A front room was added a few more years in and just this year I’ve completed renovations on the kitchen and bedroom. While I like the way my home looks now, sometimes I wax nostalgic thinking about the way it was when Uncle Mac lived here. Long live the Sixties and Hicks Mobile Homes!