International Harvester offered a camper for their Scout 80/800 models 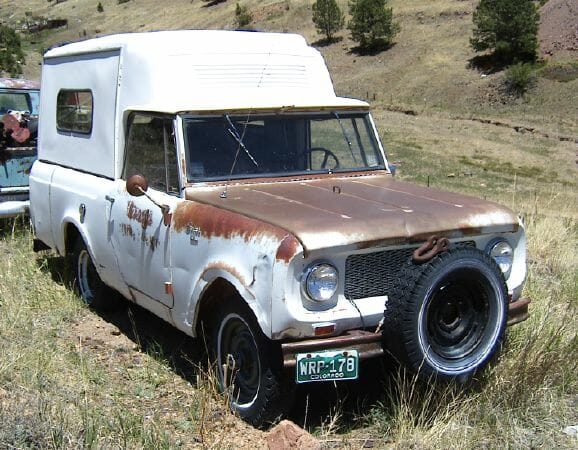 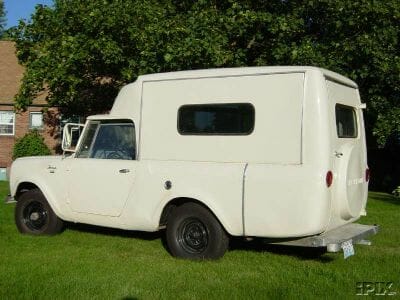 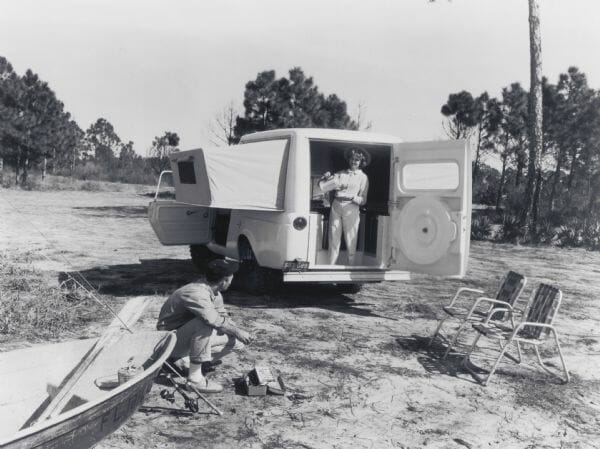 International Harvester created this early prototype truck camper design in the 1960s, based on their Scout 80 chassis.
Truck campers have a special place in RV history. In the 1960s, Jeep and truck manufacturers experimented with adding living quarters to small 4×4 vehicles, ushering in the diverse RV industry we love today.

Vehicles like the CJ5 Jeep Camper gained in popularity in the late 60s. But there were others before it.

In 1963, International Harvester developed a truck camper based on the petite Scout 80 chassis, a competitor to the Jeep CJ 4×4. 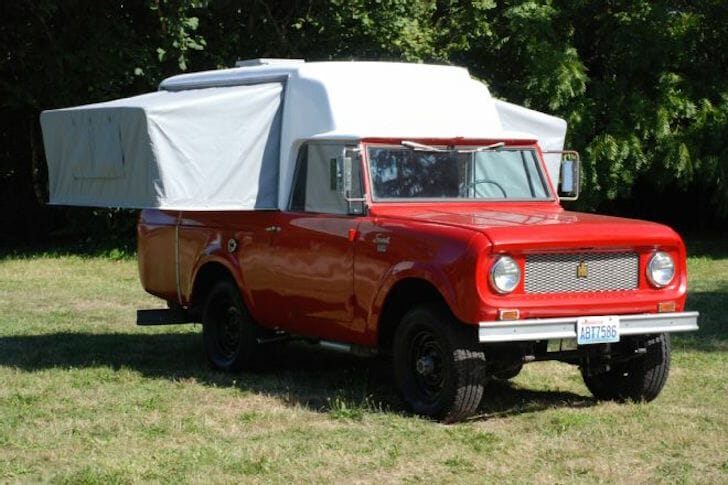 Because there are so few IH Scout truck campers remaining today, sale prices can go fairly high. We found one that sold on eBay last year for nearly $20,000.

Some sellers have said that most of the IH truck campers for sale have a white color scheme, with the red scheme becoming more rare. 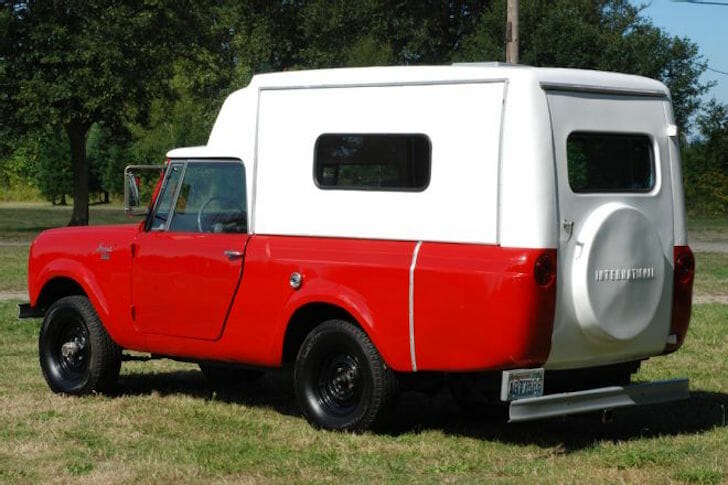 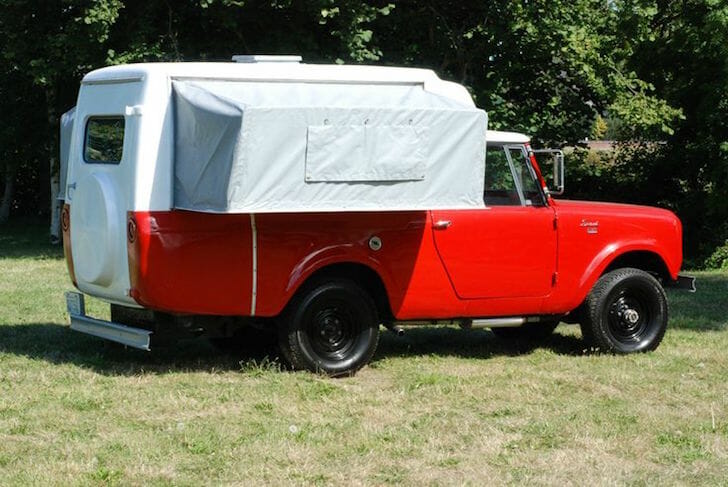 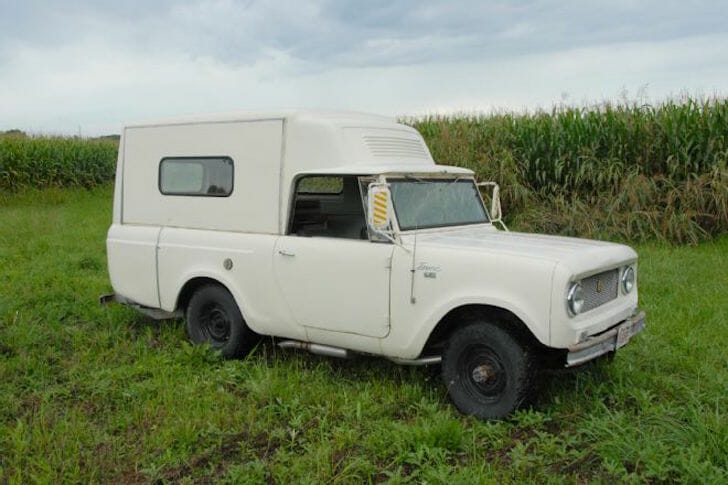 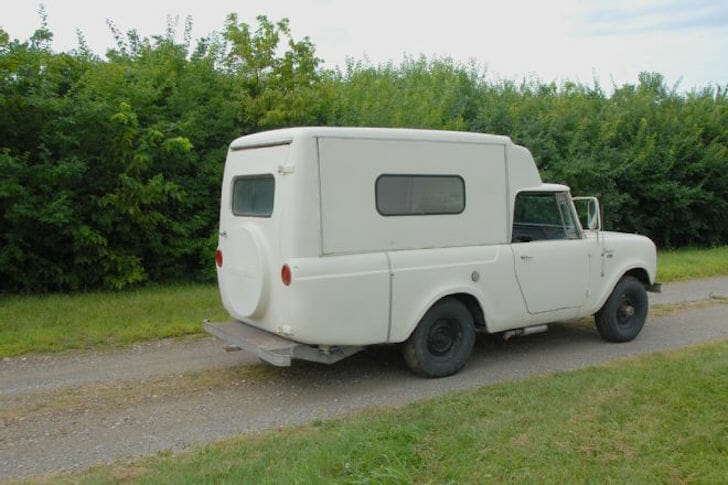 Scout Connection provides restoration services, parts, and Scout trucks for sale on their website. They’ve got just a single Scout camper available at time of publishing.

According to the Wisconsin Historical Society, an advertisement for the 1963 Scout 80 camper read,

Open the back door of a new Scout de luxe [sic] Camper by International and you step into a modern compact home on wheels. The tended ‘wings’ of the house are foam-padded beds. Inside is a stand-up galley complete with range, sink, refrigerator, and an adjoining dinette table and benches. A chemical toilet hidden in the wall can be pulled out and screened from view. There are screened windows in the bedroom wings, and screens can be obtained for the Scout front door windows. Also available is a canopy to form a roofed patio at the Scout Camper’s back door. Power for the all-wheel drive Scout Camper is provided by a 93 hp. Comanche engine.

Close-up of the fold-out sleeping quarters. 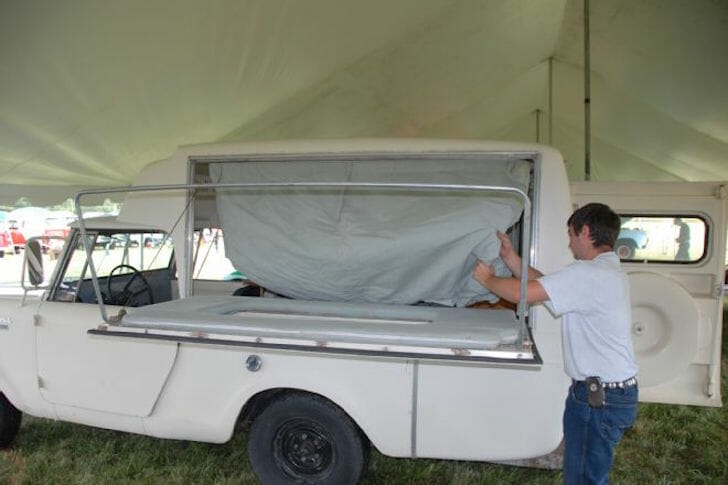 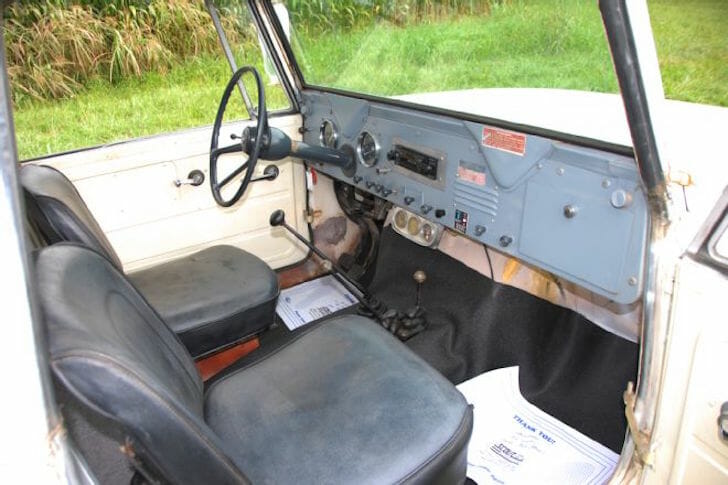 This family looks like they’re enjoying a nice outing in a Scout camper (from a vintage ad). 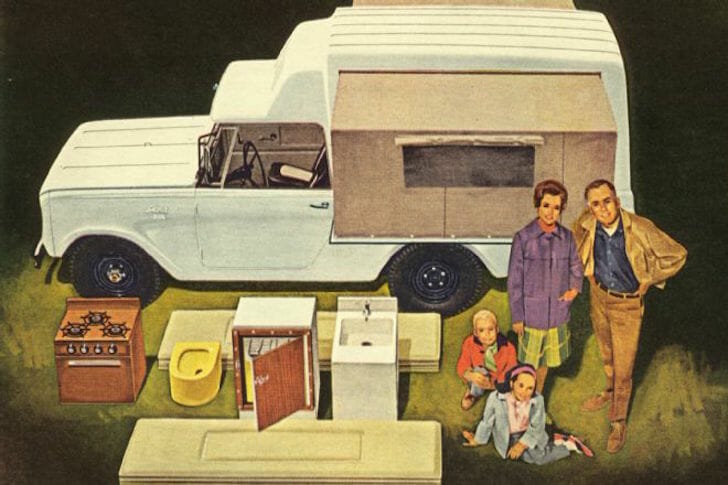 Four Wheeler has more on the history of the Scout camper, and your best bet to buy one might be Scout Connection. Sometimes these Scout campers come up on eBay, but we’ve seen only one in the last year or so.

Motorized camping was not a new pastime in 1963, but campers built on a 4×4 chassis were still very uncommon. As far as we know, the first production compact 4×4 chassis-mounted camper came from IH (International Harvester) in 1963. Built on a Scout 80 100-inch wheelbase chassis, it remains one of the very few of its type ever built.

It started early in 1962 when Fibertron, a new division of Winner Boats in Dickson, Tennessee, developed a fiberglass camper body to fit the then-new Scout chassis. It isn’t clear whether Fibertron instigated the idea or International, but Fibertron built a prototype in the summer of 1962 and the International sales department went ape over it. The Motor Truck Committee approved ordering 88 units for initial distribution and shows. A dealer announcement went out on October 25, and production began at the end of November 1962. As far as we can tell, the first public viewing came at the NADA (National Auto Dealers Association) in Florida on January 12-16, 1963. The IH sales staff gleefully predicted sales up to 400 units the first year.

The Deluxe Camper added about 750 pounds to the weight and $1,800 to the price of a ’63 Scout 80 4×4. This is a very rare survivor found by Scout Connection. It’s original and unrestored, having been originally shipped to Memphis, Tennessee, after it was built on December 10, 1962, as one of a batch of about 30 done in mid-December. At the time of writing, Scout Connection, a Scout Light Line parts supplier and Scout restoration outfit in Iowa, had recently acquired it. It’s the 12th camper built by serial and line sequence number.

The Camper started with a special Scout configuration. Required was the new heavy-duty 3,500-pound GAWR Dana 44 rear axle (RA-9 or RA 23 in IH parlance), which came with heavy-duty springs, larger brakes, and HD shocks. The new Walk-Thru option was required, as were bucket seats. The top, rear body panel, tailgate, and rear bumper were omitted. The original plan was to ship the Scouts to Fibertron for conversion done and the Camper would be transshipped to its final destination.There were three Camper configurations. The Standard unit included bunk foldouts without windows and no kitchen/toilet module. That left room for an owner to outfit the interior as he or shechose. The 1963 retail price was listed at $960 more than the Scout 4×4 base price of $2,021. The Deluxe had a kitchen and dinette module, which also included stove, icebox, dinette, toilet, 12-gallon water tank and pressurized water system, propane tank, and windows in the foldouts. This outfit added $1,850 to the base price of the Scout. A commercial version with just the fiberglass shell and fixed side panels was offered as well for high-volume cargo, but it’s not clear whether any of those were built. Optional were a second battery, a 15,000-BTU propane heater, a third bunk/hammock, shower attachment, rear tent, awning, luggage rack, water filtration system, privacy screens, bug screens, and a trailer hitch.

A big batch of Campers was built in December 1962 and January 1963 (all ’63 models). The first were earmarked for shows and displays and they made the rounds of car, camping and outdoor shows. The “official” announcement came February 5, 1963, even though the Campers had been seen already. There seemed to be a lot of interest and excitement, but it did not translate into orders. By March 1963, the 88 units originally built had fulfilled the only orders received, and the predicted 400 sales didn’t look very doable.

The conversion added about three feet to the tail of the Scout, which didn’t do anything for the departure angle. The rear step bumper and hitch are the original pieces built for the kit, though the hitch was optional.

Right away, the sold units had problems. Cracking of the fiberglass, the camper body breaking away from the Scout body, the rear door hinges breaking, and a multitude of little problems with the camper portion. Rough use seemed to shake the structure into failure and the whole project was rapidly heading into the “whoops” category.Fibertron began reengineering the unit and, by May, had an improved model. By then, IH had really cooled on the idea based on the low sales. The improved camper was tested on the Belgian-Block “Bone Shaker” test track and performed satisfactorily, but on May 27, IH pulled the plug anyway. The product was gradually withdrawn from sales literature, the few orders left outstanding were fulfilled, and IH washed their hands of it. The last Campers were built in June 1963. The records are not clear on exactly how many were built. Piecing disparate informational tidbits together leads to less than 100 built in total. There were a good number of warranty issues left to deal with after the fact.

The only Camper known to have been restored was done by Chris Brooks from Washington a few years back. It was Harvester Red when acquired and he repainted it the same color, not knowing if it was original. It turned to be the only red Scout Camper built, making Brooks a very happy man. It was built November 29, 1962, and was possibly used at the NADA convention in January of 1963.

Later analysis shows it wasn’t a terrible idea. The market was ready for such a unit but probably not in the numbers International was hoping, and there were some negatives. The marketing downside was that it turned a multipurpose Scout into a single purpose machine. Strike two was the build quality—or should we say lack thereof. The quirky layout worked against it as well. And the price was high. Without getting too elaborate, a buyer could put $4,000 into a Deluxe Scout Camper (about $30,000 2015 dollars and double the cost of a plain Scout) and easily get it up to $5,000 if he or she ordered all the bells and whistles (nearly $40,000 in 2015). Those costs really narrow the market for a single-purpose camping rig, regardless of then or now.International Harvester soon glommed onto the slide-in camper concept, and these soon became available for Scouts. In many ways that was a better idea, as it could be a camper as needed and be “regular” Scout as well. The Scout Camper remains one of the more interesting “what might have been” dead-ends in Scout and 4×4 history. There are perhaps five left that are intact, and you’re looking at the two best ones. You can read more about this Scout and others in the upcoming 416-page Scout Encyclopedia from Octane Press.

“Deploy Bunks!” Austin Faeth of Scout Connection demonstrates how to deploy the fold-out bunks on the camper at the 2015 IH Scout and Light Truck Nationals at Troy, Ohio. They are roomy, reasonably comfortable, and one of the better features. In retrospect, the standard unit without the kitchen module was the one to buy but almost none were produced. Of the five or six known Camper survivors, and only one is a Standard.

“If it had a set of wings, then I know she could fly.” Well, here are the wings, but with only a 93hp four, it ain’t no “Little Deuce Coupe.” Actually the foldouts were a clever idea to the space problems found in a small vehicle like a Scout.

The ’63 Scout underwent a good deal of very welcome upgrades. A couple of them are visible here. Roll-up windows became an option, replacing the notorious “guillotine” type sliders. From this point in the ’63 model year to when the sliders went away after the ’65s (except as a special order), 90 to 95 percent of Scouts were ordered with rollups. The Walk-Thru option with bucket seats and no pickup bulkhead debuted on the ’62 as the means to make the Scout a true station wagon with an accessible back seat. There was an interim modification done on the assembly line or at dealers via a kit, but in the early ‘63s, a better-designed removable bulkhead debuted and remained a feature in Scouts right to the end.

Yep, the early Scout’s 152ci, 93hp four was half of the International 304ci medium-duty V-8. It was a torquey beast that put all the other bobtail fours to shame. The IH four could be built on the same tooling as the IH V-8s, with just a short spur line to finish up the unique machining. When designing this engine in 1958 and 1959, International did “bank-ectomys” to all its small series (SV) V-8s of the day to create 133ci (half the short stroke V-266), 152ci (half the short stroke V-304), and 173ci (half the long stroke V-345) fours. It opted to stick with the short-stroke engines, and since the 152 made more power than the 133 and got about the same economy, it was chosen. For the ’65s, IH turbocharged the 152 and created a nightmare, but the company redeemed itself by developing the 196ci four once the long-stroke V-392 debuted for 1966.