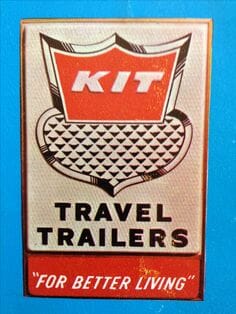 Kit was founded in October 1945 in Long Beach, California. Its first product was a small “teardrop” trailer, so-called for its shape. It was to be sold as a kit, with its components assembled by buyers and attached to the rear of a motor vehicle. The manufacturing “plant” was a latticed-front fruit stand in Pico Rivera, and the original plan called for building 60 units. However, the kit proposal was soon dropped, and the company began manufacturing prefabricated but fully assembled trailers.

The company’s initial model, the Kit Kamper, made its debut in February 1946 at a trade show in Hollywood’s Gilmore Stadium. Because of a shortage of materials so soon after the end of World War II, the 12 show models had an unusual exterior combination of war-surplus aluminum and fiberglass fenders. Inside, the trailer included all the comforts of home, including an innerspring mattress and an all-aluminum kitchen with butane stove and icebox. The response exceeded all expectations, with nearly 500 orders booked. About 3,500 Kit Kampers were produced and delivered in 1946.

In January 1947 Kit moved to a 100,000-square-foot manufacturing facility in the harbor area of Long Beach. Shortly after, production began on a larger, 8-by-14-foot travel trailer. Demand for the two models exceeded production. Kit trailers were popularized through department stores and new and used car dealers and also received publicity as prizes in the annual Soap Box Derby and the “Queen for a Day” radio program. A number of units were flown into Buffalo and Detroit in the dead of winter.

By the end of 1947 production had jumped from the original two per week to 120, and sales had climbed from $1,000 to $50,000 weekly. A few years later Kit secured an order from the federal government, which needed trailers as temporary housing.

Pocapalia became president of Kit in 1956, and the company began producing mobile homes at a plant in Caldwell, Idaho, in 1958. A second Caldwell plant, for RVs, was opened in 1964. In fiscal 1968 (ending October 31, 1968), the last year before Kit became a public company, it earned net income of $688,000 on net sales of $22 million. Common stock was initially offered at $14.50 a share, but the majority of the outstanding shares remained in the hands of existing holders. Pocapalia, who assumed the position of chairman as well as president in 1971, retained about 30 percent of the stock. Arnold J. Romeyn, who joined the company in 1946 and was serving as secretary and treasurer, retained about 25 percent. The company’s long-term debt was $1.8 million in 1970.

Kit, at this time, was building mobile homes that retailed between $4,300 and $7,500, and manufactured housing from $8,150 and $12,000. Recreation vehicles offered were the truck-mounted Kit Kamper and Road Ranger models; the Kit Companion Vacation Trailer, top seller in the Pacific Northwest; and the recently introduced Sportsmaster travel trailer. Mobile homes and manufactured housing were accounting for about 70 percent of sales; recreational vehicles for the remainder. The company was selling its products through a network of 700 dealers in 30 states.

The early 1970s were a period of great expansion for the company. In fiscal 1972, when sales reached $47 million, Kit opened plants to manufacture Road Rangers in Chino, California, and in McPherson, Kansas; and a mobile-home facility in Duncanville, Texas. Kit was continuing to produce both mobile homes and RVs in Caldwell, and mobile homes in McPherson; Mount Vernon, Ohio; Forest Grove, Oregon; and Long Beach, Riverside, and Vacaville, California.

Kit sold its Riverside and Duncanville plants in 1976. The following year it sold its idle Mount Vernon facility and opened a third McPherson plant. In 1979 the company was producing mobile homes in single, double, and triple width, ranging in length from 36 to 70 feet and in width from 14 to 40 feet, with floor area from less than 1,000 to more than 2,300 square feet. They retailed from under $15,000 to over $40,000. Travel trailers were designed to be towed behind passenger vehicles and campers to fit in pickup-truck beds. Fifth-wheel travel trailers, introduced in 1972 under the Mark V name, were intended to be towed behind and attached to special couplers in the beds of pickup trucks. Mini-motor homes, built on van truck chassis, were introduced in 1976. Kit products were being sold by 394 dealers in 25 states and three Canadian provinces.

The second energy crisis that followed the Iranian revolution of 1978 ended this brief period of prosperity. Net sales plummeted all the way to $28.8 million in fiscal 1980, during which the company, following a loss of $741,000 in fiscal 1979, incurred a deficit of $1.5 million. RV sales, badly hurt by gasoline shortages, fell to only 37 percent of the company total in 1980 from 60 percent in 1978. Mini-motor homes and Kit Kampers were discontinued, and the number of Kit dealers dropped to 208 in 22 states and two Canadian provinces. The company closed its RV plant in Chino and its mobile-home plant in Forest Grove. A Caldwell plant was converted from RVs to mobile homes, and in 1981 the company was operating facilities only in Caldwell and McPherson.

Kit’s sales, however, did not approach the record 1978 figure during the early 1980s. Profits were modest, and in fiscal 1983 the company actually lost $740,000. The culprit was the mobile-home business, which fell into deficit in fiscal 1982 and did not return to profitability until five years later. In January 1983 Kit announced that the manufactured-housing product line was being overhauled, aimed at accommodating demand for units that were lower priced and constructed more like site-built homes. During fiscal 1984 mobile homes accounted for only 27 percent of company sales.

In fiscal 1987 Kit topped its 1978 highs with sales of $68.1 million and net income of $1.8 million. Increased interest rates on conventional, site-built housing were said to have given manufactured houses a competitive advantage, resulting in an upturn of sales. The RV business was also doing well that year, with Royal Oaks, Oak Crest, Golden State, and Limited models selling for between $19,000 and $45,000.

After Kit reached a new sales record of $73.8 million in fiscal 1988, the mediocre economic climate of the following years took a toll on its business. Revenues declined each successive year through fiscal 1992, when they fell to $55.5 million. Although the company remained in the black, the RV sector lost money in 1991 and 1992, when a new management team was brought in. Its deficit widened in fiscal 1993, despite a sales gain of 11 percent to 3,335 units. The company as a whole lost $33,000 on sales of $59.1 million that year.

Kit’s McPherson manufactured-home plant was destroyed in a 1992 tornado. Production continued at Caldwell, where about 500 homes were produced in 1993, along with RVs. In 1993 the company began work on a second Caldwell facility–opened in 1994–behind the main building, in order to double its production of manufactured homes, most of which were being placed in the western states. In making the announcement, Kit spokesman Ed Tucker declared that “Public awareness and acceptance have increased year by year. … The majority of homes we sell go on private property available for 30-year land-home financing. The homes we build are an affordable value.” In 1994 they ranged in floor area from 1,100 to 2,500 square feet and were selling at $28,000 to $90,000.

Kit expanded its sales network for manufactured housing in 1995 to take in three more Western states: Wyoming, Colorado, and parts of northern Arizona. The company had been selling its homes in Idaho, Washington, Oregon, Utah, Nevada, and Montana, with Utah and Idaho the biggest markets. About 1,400 manufactured homes were produced in 1994. Approximately 91 percent were double- and triple-wide homes, with the remaining nine percent single-wide models starting in size at about 700 square feet.

The company’s RV business turned around in 1994, when sales rose more than 50 percent, to 5,009 units, moving Kit into the top 10 in this field. Produced in Caldwell, the 35-foot-long Companion Cordova was its largest model, with living-room and bedroom walls that slid out by pressing a button. Produced in McPherson and selling for $21,000, the 33-foot-long Sportsmaster fifth-wheeler was a “toy hauler for the guys” with a 10-foot rear patio that could carry snow machines, golf carts, bicycles, motorcycles, Sea Doo watercraft, or all-terrain vehicles. A Kit executive said the market consisted of people age 45 to 65 who “sell their home and want to travel.” Selling for between $9,000 and $32,000, the company’s RV models had carpeted hardwood floors, kitchen skylights, solar panels, electric brakes, deluxe range/ovens, enlarged galleys, and power roof vents.

Kit opened a new RV manufacturing facility in Caldwell in 1995, about three miles from the plant producing manufactured homes and the Road Ranger and Companion RVs. This new plant, aimed at meeting demand in the Northwest and Canada, initially produced the 33-foot Sportsman fifth-wheeler but eventually was to manufacture all 21 models in the Sportsmaster line, ranging up from a 19-foot trailer selling for $8,000. About 2,800 Sportsmasters a year were being produced in McPherson at this time. Kit’s RV production reached 5,516 in 1995.

Kit’s sales rose by about 50 percent to $89.7 million in fiscal 1994, and its net income reached a record $1.9 million. Sales increased to $101.5 million in fiscal 1995, but net income was only $1.3 million due to new-production and plant expansions and consolidations, and the company lost $53,000 on manufactured housing. There was no long-term debt in January 1996. Pocapalia increased his stake in Kit from 30 to 46 percent in 1994, when Romeyn sold his 25-percent holding back to the company, which retired the shares.

Recreational vehicles accounted for 73 percent of Kit’s sales in 1995. They measured from 16 to 36 feet in length and provided sleeping accommodations for two to 10 people, with over 50 different floor plans offered. Components and accessories included name-brand appliances, radial tires, rubber roofs, and fiberglass insulation throughout. Interior features included an entertainment center with AM/FM cassette stereo, skylights in the bath and living areas, queen-size bed, microwave oven, and ducted air conditioning and heating system. Several models had slide-out features for interior expansion of the living room and master bedroom. Awnings were available and could be converted into an enclosed patio.

The company’s RV product lines included Sportsmaster, Road Ranger, Companion, and Patio Hauler. Retail prices ranged between $9,500 and $45,000. Some 239 independent dealers were distributing the company’s RVs throughout the United States, 32 in Canada, and five in Japan.

Kit’s Manufactured Housing Division was producing homes in 40 available floor plans ranging from 750 to over 2,500 square feet, towed by truck to locations where they were set up and connected to utilities. Retail prices, exclusive of land costs, ranged from $25,000 to $115,000. Distribution was through a network of approximately 50 dealers in nine western states.

Most models included walk-in closets, spacious open areas, and Roman tubs with special showers. The Sea Crest was the smallest. Sierra models were double- and triple-wide, with an array of styles and custom features. The spacious Kit Special home was offered in a popular double-section configuration. The Golden State line was described as outstanding value for individuals placing a premium on comfort and luxury. Designed specifically with subdivision application in mind, the Briercrest came ready to attach a site-built garage.