It was considered a custom home built in Lima Ohio and Mr. Tam built others between 1938-1947. Glennis E Tam (1902-1974) was described by his nephew, R Stanley Tam, as a different type of fellow who did all of his work in his wood shop behind his home at 107 North Jackson Street, Wapakoneta, Ohio. Some of that work included house trailers and truck bodies. Glennis advertised his custom insulated house trailers in the Lima, Ohio newspapers (1938-1940): $265.00 could see you purchase a home on wheels to see America. And that’s just what Stanley did when he married in the 1940s. According to Stanley, there were many stops during their honeymoon for tire changing – due to the overloading of clothing by his new bride! Another couple looking for travel adventure, Lauren and Grace Hoffman, purchased a second- hand Tam on September 28, 1963 from Burr Debar, an oil and gas retailer from Elsie, Michigan for $300.00. The last year it was licensed was 1964, they then parked it up on land in Hesperia, Michigan and eventually it was enclosed with a crude plywood structure, which is likely why it may be the lone surviving Tam with a well preserved interior. When Brandon Morrison was approached by Grace’s daughter in the fall of 2015, the craftsmanship of Glennis was still evident. The Redwood Gum plywood gave the cabinet doors a two tone effect and the Douglas Fir plywood walls were as rare as the Tam herself. Seeing past the condition of the back wall, which had been left to the elements, we purchased the Tam, which is 20 foot long with single axel, from Brandon in the spring of 2016 – as he regretfully lacked the facility to restore her. Our first step in the extensive restoration process was to remove the Celotex and insulation. Thankfully the termites favored the siding for meals and our work revealed a solid, well-built trailer! For additional strength, we replaced the perimeter of the original wood frame (below the exterior walls) with angle iron. A new axle has been fitted, upgrading the brakes to electric. The interior walls have been insulated (Prodex), sanded, and finished using the French Polish method (Pratt &amp; Lambert#38 varnish). In the kitchen, the cabinets have been restored and reproduction red Marmoleum applied to the counter top. As we plan to travel America as the Tam was intended, some modern conveniences have been added: The Coleman Preway range is a façade that houses a microwave; the nameplate and 1940s Signature door handle of the ice box adorn a small refrigerator. We were lucky to find original tiles from the era to replace the flooring. The Click Clack sofa has been restored and reupholstered with period correct fabric. Unfortunately the steel Marvel windows were beyond repair and have been replaced with 1950s aluminum ones, which are framed by curtains made from reproduction fabric. The original pocket screen door and lighting fixtures remain – where the latter benefits from new breakers and wiring. To prevent history from repeating itself, aluminum has been instated in lieu of the not so weather proof Celotex siding and canvas roof that Glennis chose. 60 years later, our 1947 Tam proudly brings his bespoke design back to the highways and byways of America. Cheryl & Mike O’Connor 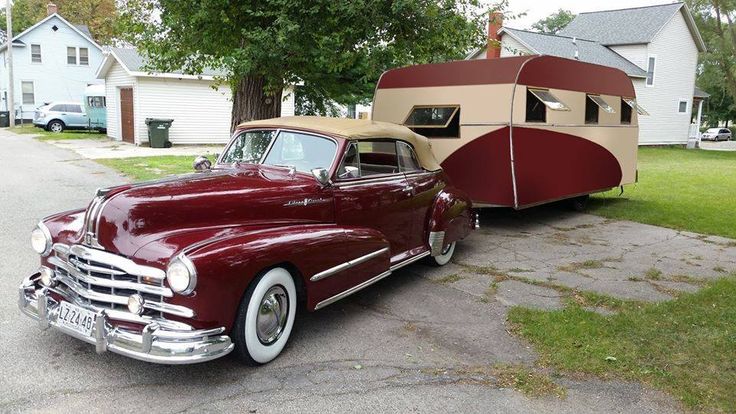