Sunline was started in 1964 by two men, Wayne Weaver and Lewis Martin. The very first Sunline was built for Wayne Weaver’s honeymoon trip and simply a truck camper mounted in the back of a pickup truck. Following the trip, the company took off as they started building truck campers as well as garden sheds in their garage in Schoeneck, PA and later Akron, PA.

By 1968, Sunline was growing and became incorporated. The growth caused them to have to seek a new, larger location, and the S. Muddy Creek Road plant in Denver, PA was constructed the following year. This would serve as the main manufacturing location for the entire life of the company, though additions to the facility were added at various times to accommodate production volume.

In the mid 1970’s, Sunline underwent some ownership changes. Wayne Weaver chose to pursue other career options, which resulted in John Zimmerman and Wayne Lawrence, Sr. joining Lou Martin to bring a fresh perspective into the business. The atmosphere in the world provided a difficult scene to produce and sell recreational vehicles, but the team’s ideas created many small, lightweight models that proved very popular with the new American consumer, who now were purchasing smaller tow vehicles. This type of product etched the qualities that Sunline became known for through the years.

In 1978, Larry Lawrence, Jr. joined the team, eventually becoming president and CEO in 1988, which also led to the retirement of Wayne Lawrence, Sr.

Throughout the 1980’s, Sunline became known for not only the small, lightweight towables, but they also entered the market of larger trailers (those over 30′) in the mid 1980’s. They really had the eastern US market covered for those who wish to travel as well as those who wish to escape to one campground every weekend to a seasonal site.

The 1980’s also fostered the addition of another manufacturing facility on site, which more than doubled the amount of manufacturing space available. Sales in the 1980’s skyrocketed, and in some years around half of the coaches produced were truck campers.

1987 saw the first hint of the “luxury” aspect with the addition of the Classic option package, which incorporated hardwood cabinet doors, hardwood trim pieces, and higher quality, more comfortable furniture and fabric choices. This package would soon lead to major interior changes to all coaches.

The 1990’s resulted in many modernizations in the RV industry, and Sunline was no exception. 1995 saw the very first slide out rooms. 1992 saw the very first polar white exterior. 1991 resulted in a complete redesign of the cabinet doors to follow a design similar to the Classic package and to make the coach feel more home-like. On the company side, Sunline saw their very first internet website around 1996. Due to changing trends in the industry, fifth wheels and truck campers were discontinued after long production runs, which left travel trailers as the only remaining product. 1996 saw the very first Sunline travel trailer with a slide out, which became a trend that took off.

By the year 2000, a significant portion of the coaches produced contained slide rooms. One model, the T-267SR, combined a slide room, bunk beds, a maneurvable length, and a manageable weight all in one attractive package. This model became very popular with families, as it offered all of that plus plenty of open space for those rainy days inside. While a 3/4 ton tow vehicle is nice to have for towing this trailer, it isn’t necessarily required and 1/2 tons will get the job done, which is an attractive feature for most families.

In 2004, Sunline was sold to an investment firm as the past three owners had a desire to retire. In February of that year, the sale took place and former president Dale Zimmerman, who took over in 2000, became the new executive VP of production. This gave the new firm an edge by having a seasoned person on the team.

Initial changes were minimal, though product development went into high gear. In 2005, they introduced the very first toy hauler travel trailer, an up and coming trend in the industry which allowed the rear part of the coach to haul motorcycles, ATVs, or whatever else one would like to haul in a “garage”. The initial model had a garage with room to haul one of the above, and a model capable of hauling two was introduced later in the year.

In 2006, a very unique product was introduced. It is the only production handicapped capable RV in the market, called the Advancer. At just over 20′ long and relatively low to the ground, it can be pulled by most handicapped vans and all the features in the coach were made accessible for a wheelchair. An optional Braun wheelchair lift was also available. Sunline had a long history in wheelchair accessible coaches as they had been offering modifications to select floorplans for many years, though the modifications were no where near as extensive as was the Advancer offered.

2007 also brought about a revolutionary new product. The Que was a 17’7“ trailer based on principles of earlier Sunline coaches from the 1980’s. The Que was not only designed to be small, lightweight, and have high quality, it was also extremely modern looking for the time and utilized many new, unique products in production. The Que was very much based off of a European caravan, which isn’t much different than a U.S. travel trailer except that it is much shorter than most of what we have here and uses different components. To follow this European theme, Sunline utilized very modern looking appliances and construction techniques while still keeping a “homey” feel with the plush microfiber cushions and window treatments. The Que also used the newest Sunline feature, the cherry wood interior option as a standard feature. So between the smooth fiberglass exterior, the deep cherry wood interior, and bold fabric colors complimented by crisp lines, the Que would make an outstanding studio for the modern traveler.

Unfortunately, November, 2006 brought about some terrible news for Sunline. After 42 years of being a leader in lightweight quality, the decision was made to shut down production. Initial speculation said a buyer was being sought, but that never happened and eventually the assets were auctioned off and the property was sold.

Though the company no longer exists, the legacy left behind has created one of the strongest bonds of owners known who are deeply passionate about preserving their little piece of Sunline history.

Sunlines had many interior choices. The interior colors prior to 1985 were not formally published, but were commonly different plaid colors with a white base. Many seat cushions have been recovered today. Sometimes the valances are indicative of the original interior color.

For the best tips on identifying a Sunline, please visit the Sunline Registry Facebook page. It’ll help show you where to look for your VIN: http://www.facebook.com/pages/The-Sunline-Registry/163659057042012

Basically, the VIN is in three places: 1) On the left tongue rail either stamped into the edge of the coupler or on an aluminum plate riveted to the trailer. 2) On the federal ID sticker (metal tag <1975) on the off door side front of the trailer box, but many of these stickers no longer exist due to weathering. 3) On an aluminum plate or plastic tag below the primary entry door sill plate.

All Sunline VINs 1980.5-2007 will begin with 1LC as the world manufacturer identifier. The 10th digit fron the left will identify the model year. All Sunlines prior to that will be five to seven digits, with most being six. The last two digits are always the model year of the coach. Only some Sunspot trailers have seven digit VINs, otherwise they’re all five or six.

It is unknown at this time if the Solaris Mini-Motorhomes have separate Sunline VINs or if they just used the chassis VINs.

All Sunlines from about 1994 and up included the Preferred Options Group (POG) from the factory. This included things like air conditioning, stereo, patio awning, Oak kitchen kit, etc.

One significant option is the fiberglass exterior option. Originally introduced as the Advancer package for any Solaris model in 1997, it gave customers full fiberglass/filon siding, special graphics, and white frame windows/doors. Interiors were no different from the standard Solaris models. It became the SE Package (Smooth Exterior) in 1999. The initial SE package contained the same graphics as the Solaris, just on filon siding instead. The SE package remained up until 2007, but it did receive special graphics in 2003 and a redesign of those graphics in 2006. The SE Package came standard on Tran-Sport toy haulers and the lightweight Que model.

The Sunspot offered a lightweight, easily towable camping trailer. There was no included bath or shower, but the Sun Spot did include a galley, awning rails on the back and sides, and sleeping space for two. 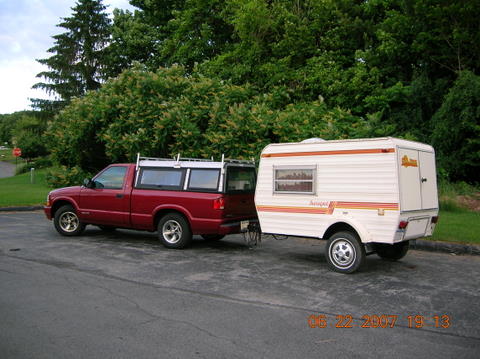 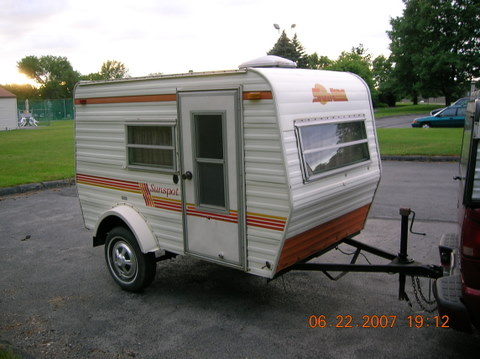 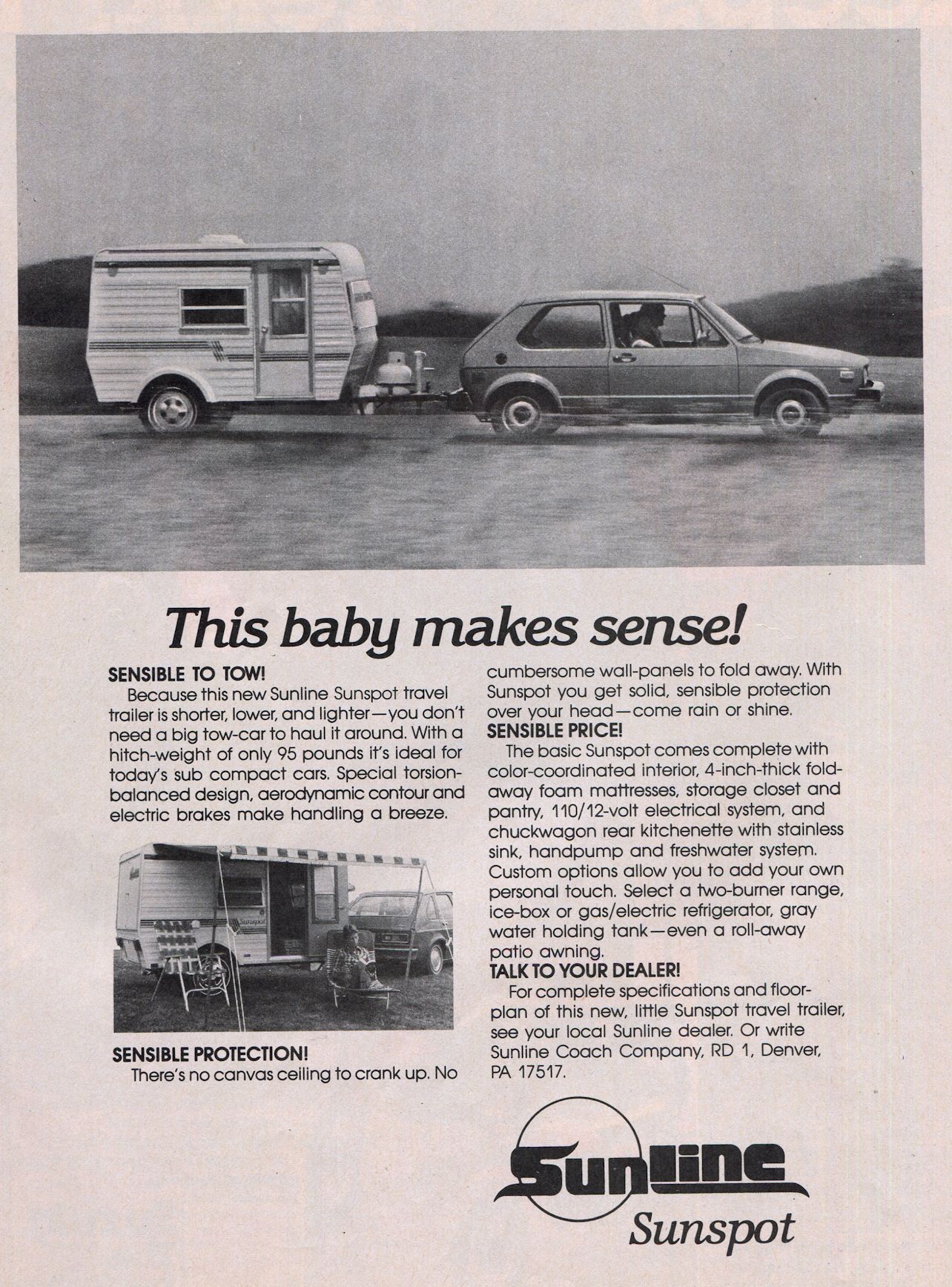 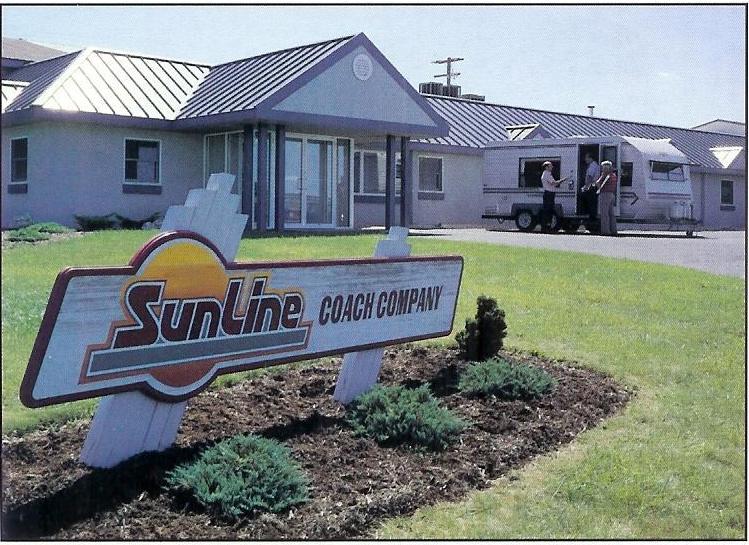 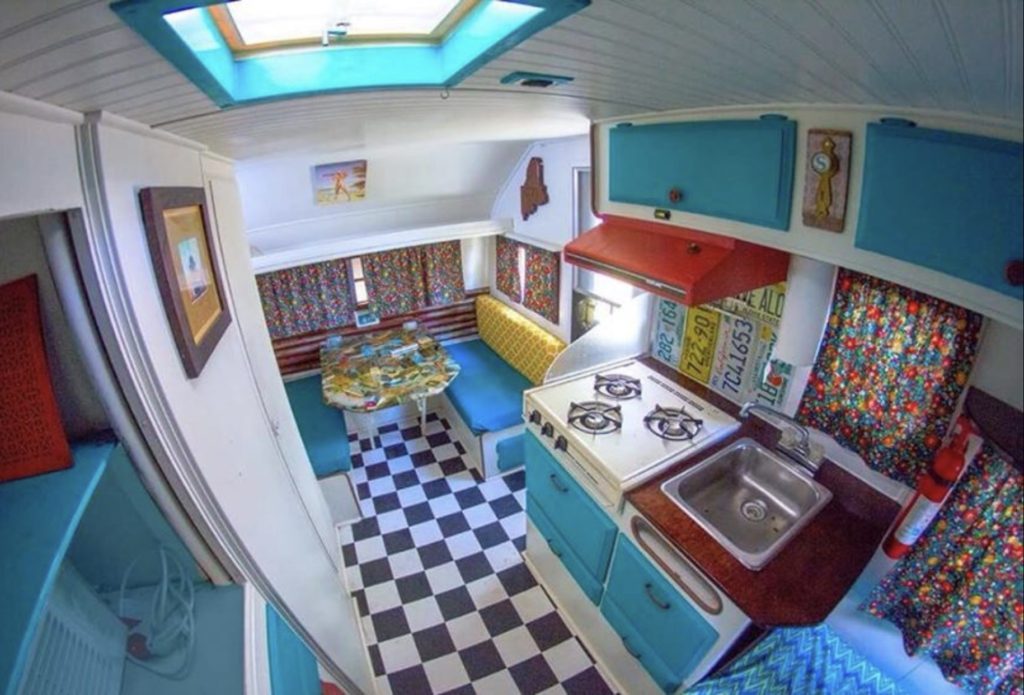 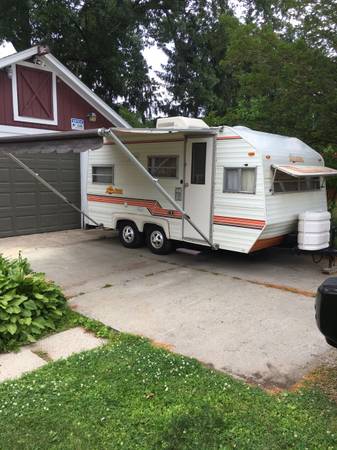 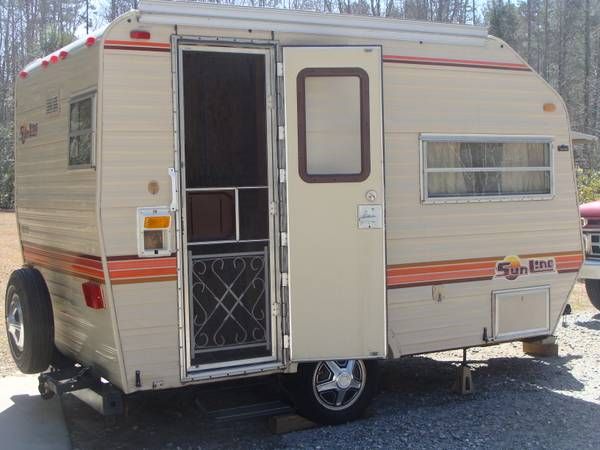 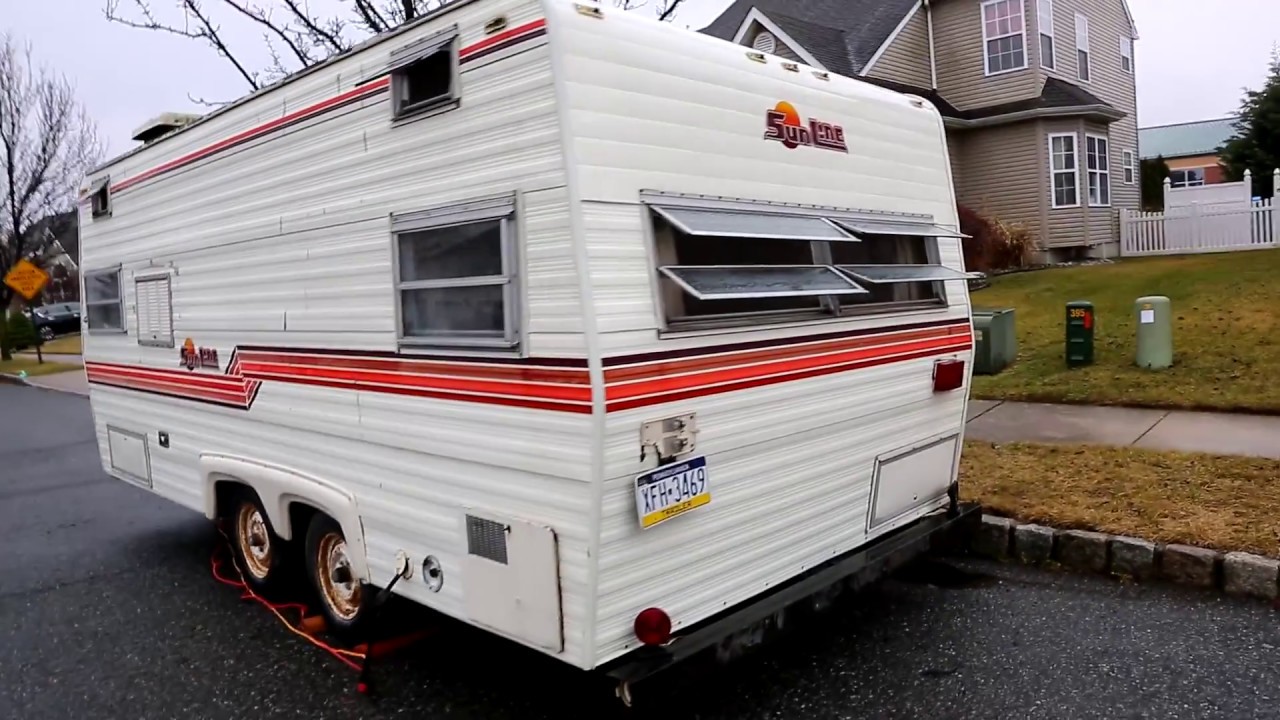 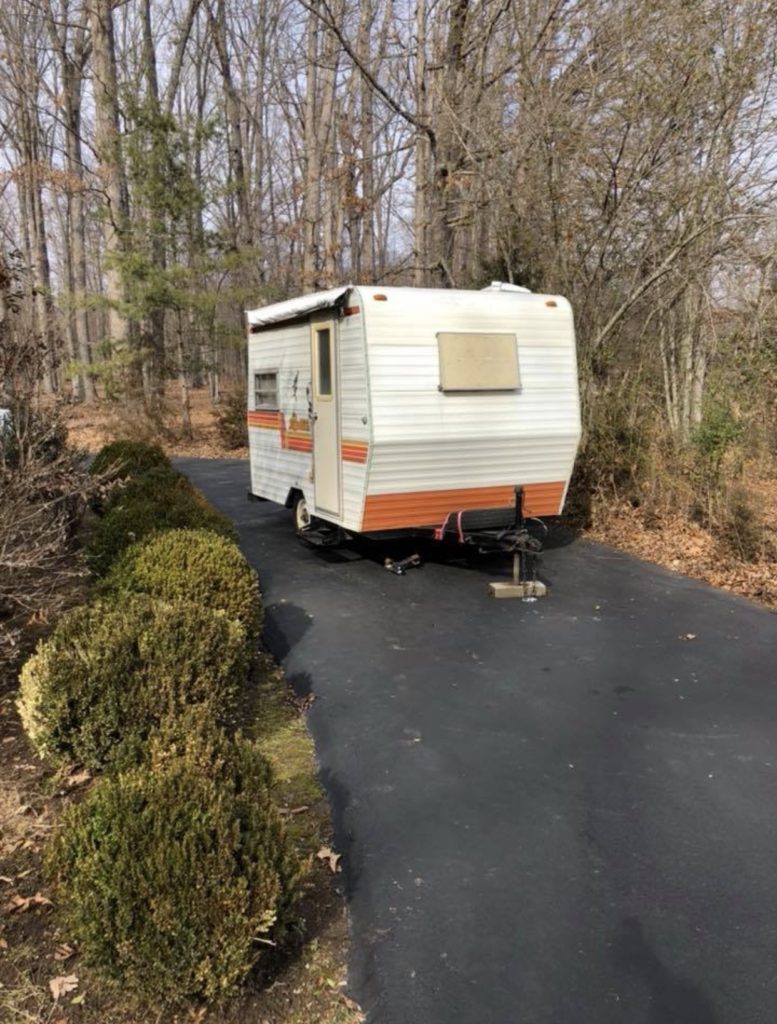 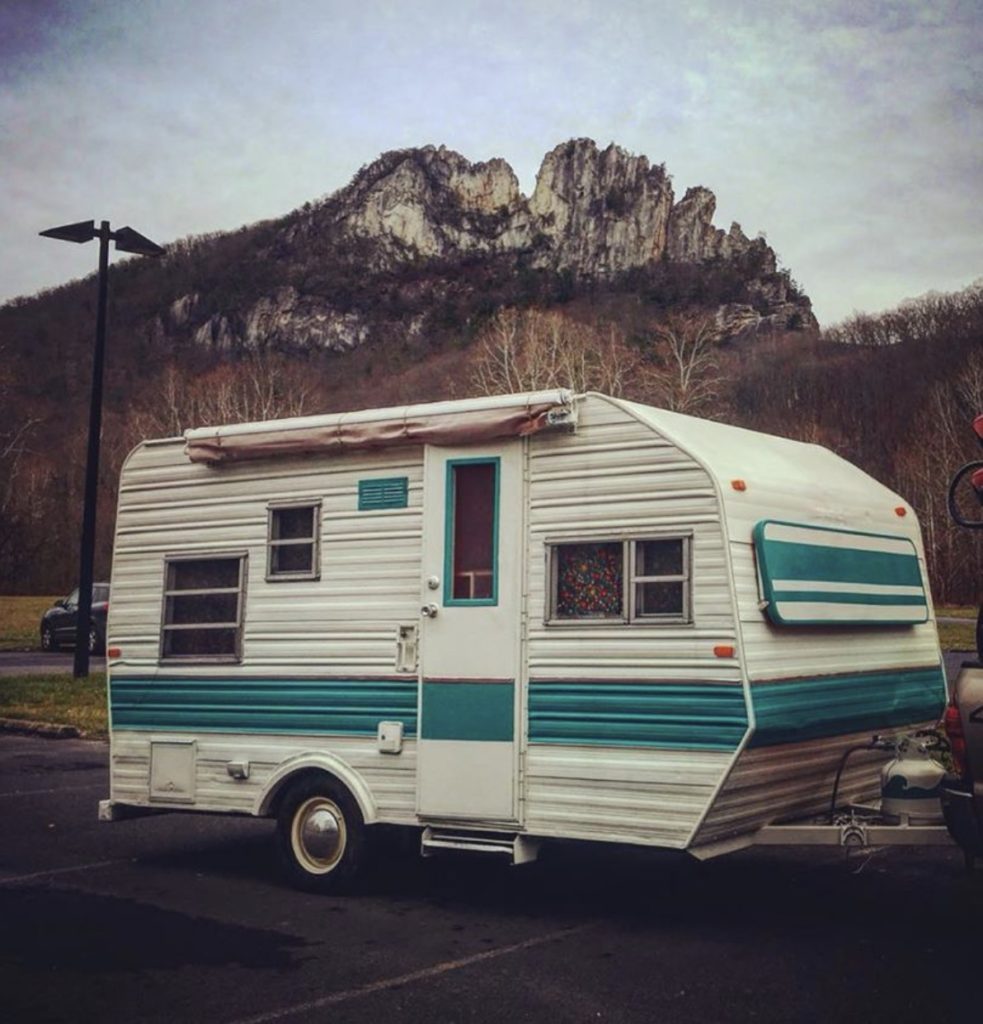 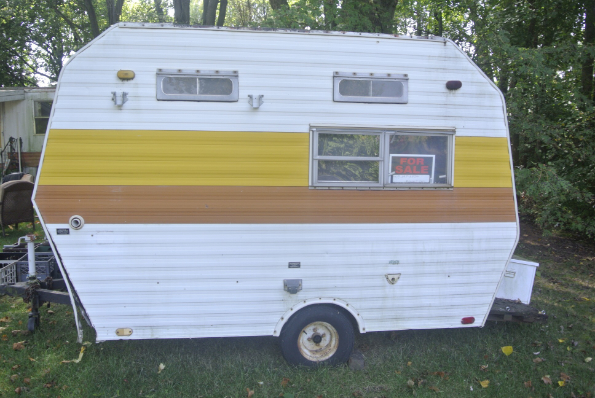