NOTE; Information contained herein was gathered from archival sources in the present City of South El Monte, County of Los Angeles – Public Records Division and the Los Angeles County Public Library, California. Other sources include; original company advertising, web searches, email and voice contacts with actual and former owners and from some of the 21 other known trailer manufacturers who were located in the cities of El Monte/South El Monte between 1949-1960, and beyond.

Winton Read contactwhr@harbornet.com is solely responsible for this posting. Questions or concerns about this content? Please contact him. Of course you are free to make any changes or additions you wish, but the more we coordinate our efforts, the better and more factual this Wiki will be… When revisions are made, please update the revision date at the bottom of each section.

The company had two divisions; the Travel Trailer Division. and the Park Model Division which later became the Mobile Home Division. Telephone; CUmberland 3-4521, or GIlbert 4-4951.

Factory serial numbers are located on the top of the front right frame rail in the hitch triangle. A number of 5817234 means a unit was made in 1958, is 17 feet long and is the 234th of all trailers made that year.

Later brochures indicate an interested buyer could contact Empire for the nearest dealer. Presumably this meant other dealers took on the marque.

The first known company logo was a rectangular metal badge with a graphic of the Empire State Building in New York City. The direct connection, if any, between New York and El Monte, California is not known. Perhaps since the Empire State Building represented a symbol of American strength in the 1950’s, the company wished to project that symbol as indicative of its manufacturing prowess. There was also a portion of the logo in the form of an angled EMPIRE decal used on the front of the travel trailers above the window. It is believed the park models or mobile homes also used this decal. Another oval metal badge with a graphic of a world globe has been reported.

Other trailer manufacturers using the name “Empire” intended to refer to their locations in what is called the “Inland Empire” or mid-western USA, not the New York City building by that name.

NOTE #1; “Fiberglas/Fiberglass”, “Linoleum”, “Porcelain”, “Bias-Ply”, “Porta Potti”, “Galvan/Galvanic/Galvanized” and “Formica” are registered trademarks.
NOTE #2; Telephone numbers are from the years 1950-1960 and are all 6 numbers including an “Exchange” name. The first two letters of the exchange name (GIlbert, MOnroe, etc.) are capitalized and represent corresponding numbers on a telephone dial…
NOTE #3; There were no telephone area codes or postal ZIP codes between 1950-1960 in California. There were rural route numbers, but not in incorporated areas.
NOTE #4; All images are taken from the public domain, used by permission, or if of unknown credit/origin are so stated. No copyright, patent or trademarks are intentionally used outside of their respective domains. If you are the owner of such rights and wish acknowledgement please contact Winton Read, contactwhr@harbornet.com for assistance. 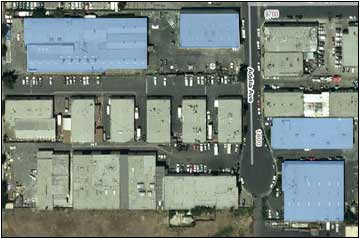 NOTE; Many small manufacturers were bought out by larger ones and re-badged during these years. For example, the Terry trailer company was purchased several times and existed until 2009, though having no connection to the original El Monte business, except in name and history. However, it is known the El Monte, California, Empire Trailers, Inc. factory was indeed closed in 1960. 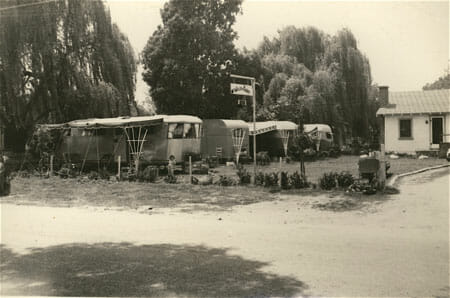 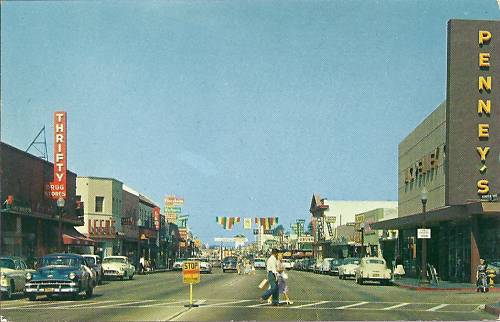 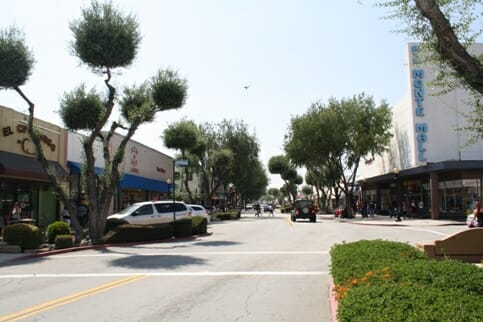 Empire Trailers, Inc. referred to their models by coach, not overall length. On the other hand, some state licensing entities consider overall length for licensing purposes, so for example, an Empire 12′ is called an Empire 15′ in Washington State… 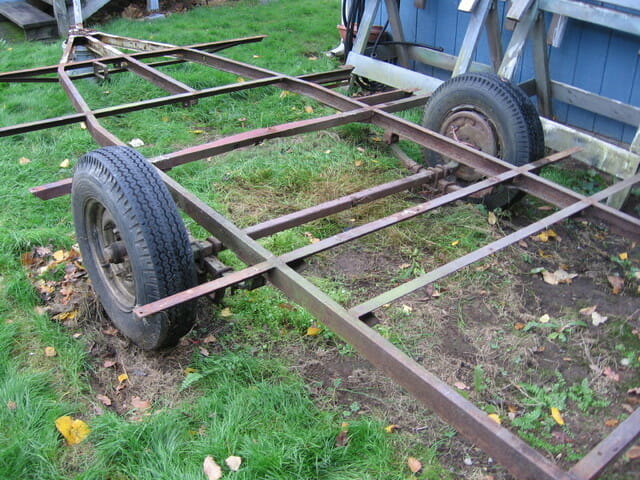 Unknown make 1950’s frame though very similar to Empire; cross members, solid forged drop axle, stock underslung leaf springs, wheels, brakes, Bias Ply tires. Except for the park models, all travel trailers were painted white with a sky-blue lower-half band which dipped down and back up again near the wheel well opening.
An earlier paint scheme has been reported and is being researched. See the Pictures section for examples.

Left interior; Two square opening cabinets over the galley at the ends of an opening window. One single cabinet under galley with counter which has small single hand-pump faucet, Porcelain sink, stove, storage under with drawers, and Formica counter top. Small rectangular opening window on upper rear for ventilation.

Other years of Empire travel trailers had similar layouts, just larger, and beginning with the 171/2′, a single stall bathroom and metal enclosure shower. Some also had a forward opening main door. See; Standard/Unique Features/Options.

The layout of the park models is unknown, but probably similar to other manufacturer’s during the 1955-1960 period.

For the 12′ travel trailer;

For the 12′ travel trailer, these were extra cost items. Specific lists for other models are likely similar;

For purposes of this section, some original exterior color schemes and mostly original interiors are shown, though some owners have modified their Empires in very creative and colorful ways. Those are also shown and are so noted. 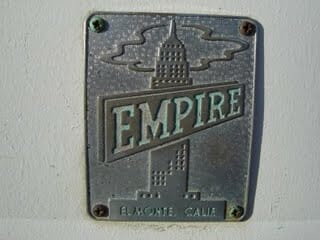 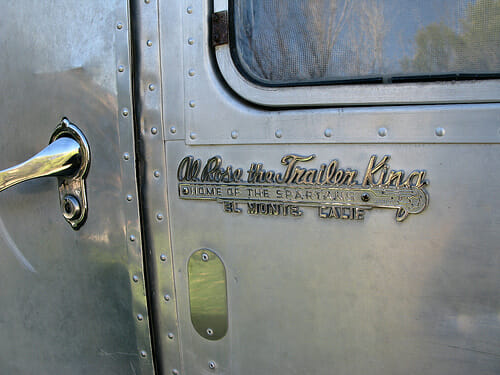 Chrome script badge for “Al Rose, The Trailer King”, a multi-brand dealer.
A generic version was used on other makes, including Empire. 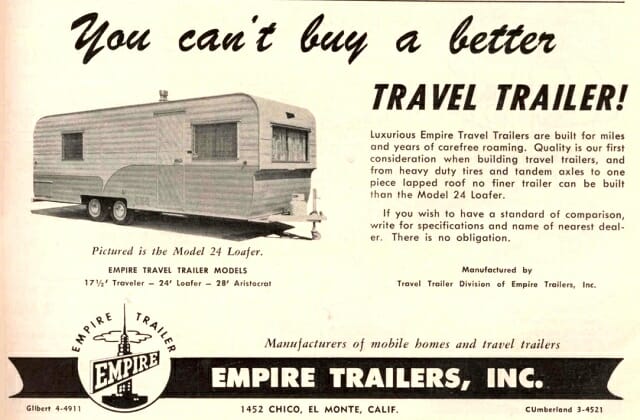 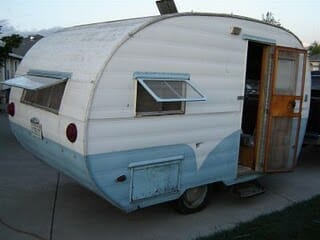 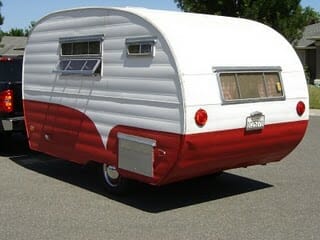 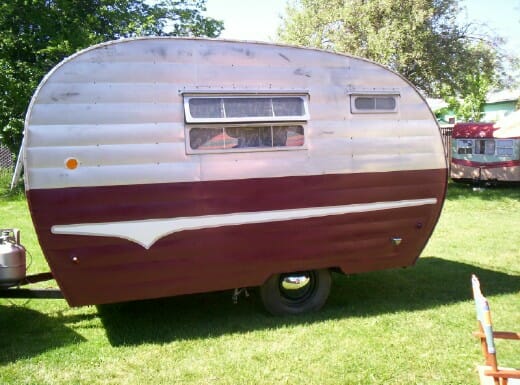 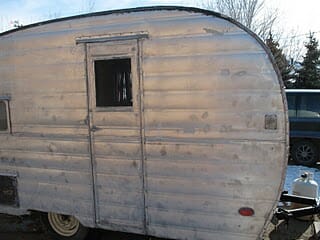 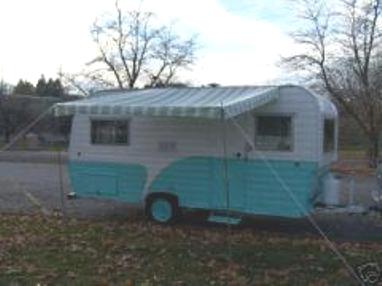 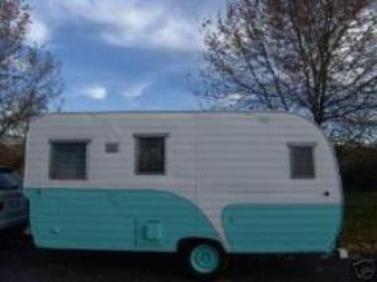 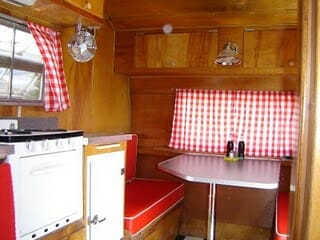 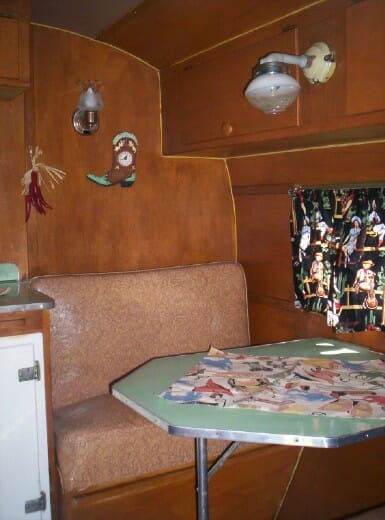 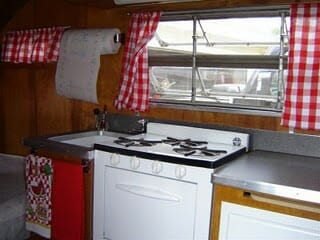 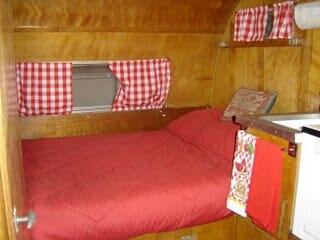 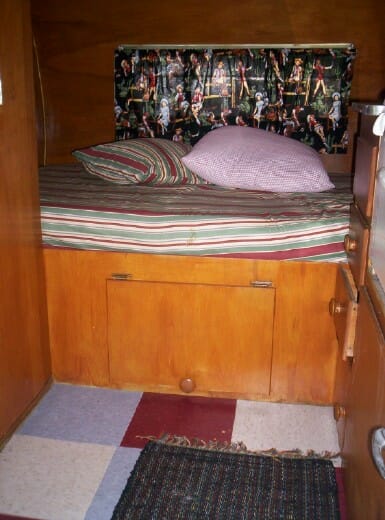 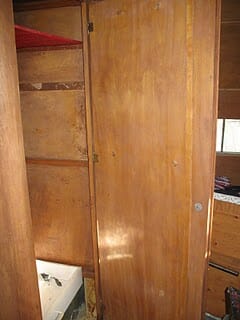 “Sisters on The Fly”; http://www.sistersonthefly.com/

To contact any of the sisters directly, email sisters@sistersonthefly.com.

Identify yourself, and why you wish direct contact with a sister, naming the sister by her club number as above, and asking the sister be given your email address to respond to. This way the privacy of everyone is assured…

“Sisters on The Fly”; http://www.sistersonthefly.com/