Located in New Orleans Higgins, Inc. was founded by Andrew Jackson Higgins in January 1946 with the intention of manufacturing commercial boats and other leisure-time vehicles which included the Higgins Camp Trailer. A. J. Higgins transferred the remaining assets from Higgins Industries, Inc. which was liquidated in December 1945. The Higgins Trailer was actually invented John Morris Poche of New Orleans with the assignor as Higgins, Inc. J. M. Poche applied for his patent on February 12, 1946 and was granted US Patent 2,502,024 on March 28, 1950.

During World War II Higgins Industries, Inc. developed landing craft (LCVPs) and 63 other products for the war effort. A. J. Higgins’ designs contributed significantly to winning the war and his prominent place in American history is firmly established. It was said by Dwight D. Eisenhower, “….. the man who won the war for us”. The National D-Day Museum by Stephen E. Ambrose, the acclaimed historian and author of several quality written books on the war (my personal favorite author). It was Stephen Ambrose’s admiration for A. J. Higgins and America’s Citizen Soldiers that inspired him to pursue his dream of building a museum in 1991. Of course Stephen E. Ambrose could not have foreseen the designation of the museum as the American National World War II Museum in 2003 and how large it would eventually grow into. Much is written about these years and the museum, so we will turn our focus back to pop-up campers.

The transition to peace-time industries was not easy for A. J. Higgins. While certainly ahead of his time Higgin, Inc., never achieved notable success. A. J. Higgins designed several new products for the post-war market. His camp trailer featured an aluminum body with a steel frame (it was 1948 be Theodore Heil used aluminum in his trailer patent). His amphibious pop-up camp trailer was probably his most unusual invention. In August 1947 Popular Science featured an article about this camper, Trailer Becomes Pleasure Boat. Made from aluminum it weighed 829 lbs and rested on inflatable pontoons. It moved under its own power from a small outboard motor. It even included a canvas bow to increase speed while being towed.

The company lost its founder and leadership on August 1, 1952 when A. J. Higgins died at the age of 65. His four sons took over the business and sold it to New York Ship in 1959. It appears that Higgins Inc. manufactured the trailers from 1946 to 1947. I have found advertisements from Christmas of 1946 to Late 1947 in magazines such as Life, Holiday, and Field and Stream. The recession of 1948 might have claimed the Higgins Trailer, along with other RV manufacturers of the time. 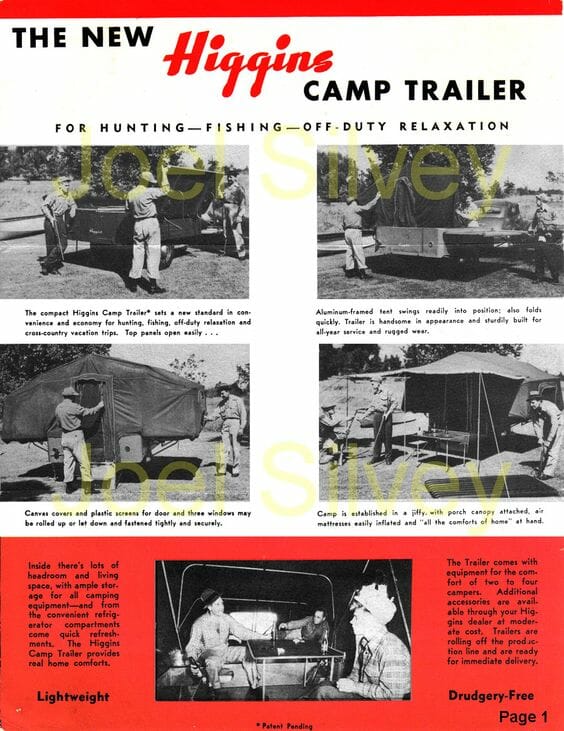 Higgins was founded by entrepreneur A.J. Higgins. An industrial manufacturer working with lightweight aluminum, Higgins was originally a contract manufacturer to the United States government, building landing craft during World War II. After the war, he applied this skill toward a small, expandable tent trailer. Manufactured only in 1946 and 1947, Higgins camp trailers are extremely rare and collectible. This trailer has the original canvas and still sits on original 1940’s era tires!

For safety, this trailer rides on a transport hauler when outside the museum, but having the original tires keeps its originality. When set up, it is a roomy trailer that can sleep a small family, has windows with screens embedded in the canvas that can be opened to let the outside in, and even has a convenient awning that makes up in front of the entrance to allow campers to enjoy the shade right outside their trailer.