First of all, what is a Revcon?

After driving many of the typical motor homes built on truck chassis, John Hall knew that this was not the best way to build a motor home. In fact, it was a terrible way to build motor homes. The truck chassis rode too harshly over bumps and the center of gravity was too high to handle corners well. The harsh ride often jarred cabinets, light fixtures and even the walls loose. The high center of gravity turned twisting roads and passing trucks into white-knuckled events. The wooden roof and walls often leaked, creating problems that no coach owner wanted. But John Hall had an idea: an all new motor home, all new from the ground up. John knew that his motor home would have to be front wheel drive to get the low center of gravity needed for the superb handling he wanted. He also knew a wooden roof and walls weren’t what he wanted, so this new motor home would be made out of aluminum like an aircraft. This was an all new idea, a totally new concept, a REVolutionary CONcept: a REVCON!

It’s no secret that Revcon construction bears a striking resemblance to Airstream trailers. It’s also no coincidence. John Hall was the stepson of Airstream founder Wally Byam. John knew that the all aluminum construction was far superior to anything else being built at the time. The entire shell was aluminum framing, with aluminum sheets riveted to the inside and outside. The walls and roof were built this way, with no seams in the roof to leak. It was also much more rigid than the typical wooden studs with thin aluminum siding stapled to the outside and plywood paneling stapled to the inside.

In 1966 GM’s Oldsmobile division rocked the auto industry with the introduction of the Toronado. The Toronado was all new, nothing like it had ever been seen before. With swooping curves, hidden headlights, big-block power and front wheel drive, it was as luxurious as it was innovative. Powered by a 385 horsepower 425 cubic inch V8, GM’s revolutionary Turbo-Hydramatic 425 transmission propelled the front wheels, an American first in 30 years. John Hall knew at once this was the drivetrain he needed for his Revcon. The front wheel drive would eliminate the need for a driveshaft from the front of the coach to the rear, and would permit the low profile and low center of gravity he envisioned. Once John Hall proved to GM that the drivetrain would work in a motorhome GM liked the idea so much that they copied it, and built the GMC motorhome.

In 1968, the first Revcons were built. They included aircraft aluminum monocoque body construction, and a custom built chassis with Oldsmobile Toronado front wheel drive. The lightweight, low profile and front wheel drive made the Revcon handle as well as any American car of the day, quite a feat for a 12,000 pound motor home. It certainly helped the fuel economy, consistently 2 to 4 MPG higher than the competition. The innovation didn’t end with the drivetrain and body, Revcon took it to the interior as well. Lightweight materials were used throughout. Cabinets were constructed of aluminum honeycomb core sandwiched between 2 thin layers of formica. Not only did this save weight, it was much more durable than the plastic or pressboard cabinets that were typical of the era, and are still the industry standard today. Everything was then trimmed with genuine teak accents. The interior walls were aluminum sheets, with high quality vinyl wall covering. The wall paper inside my Revcon is over 30 years old and looks as good as it did when new. Quality didn’t stop where you couldn’t see it either. At a time when most motor homes were built with so called “wet baths”, where the entire bathroom doubled as the shower stall, all Revcons had “dry baths” with separate shower stalls/bath tubs, just like a smaller version of your bathroom at home. Regular production started in 1971, with Revcon leading the industry in innovation and luxury. By this time, Oldsmobile had increased the size of the Toronado engine to 455 cubic inches, even more suited for motor home use. Early models, affectionately called Flat-Noses, were built until 1977 and could be had in 4 models, the 220, 250, 260 and 290, with several floorplans built in each model. 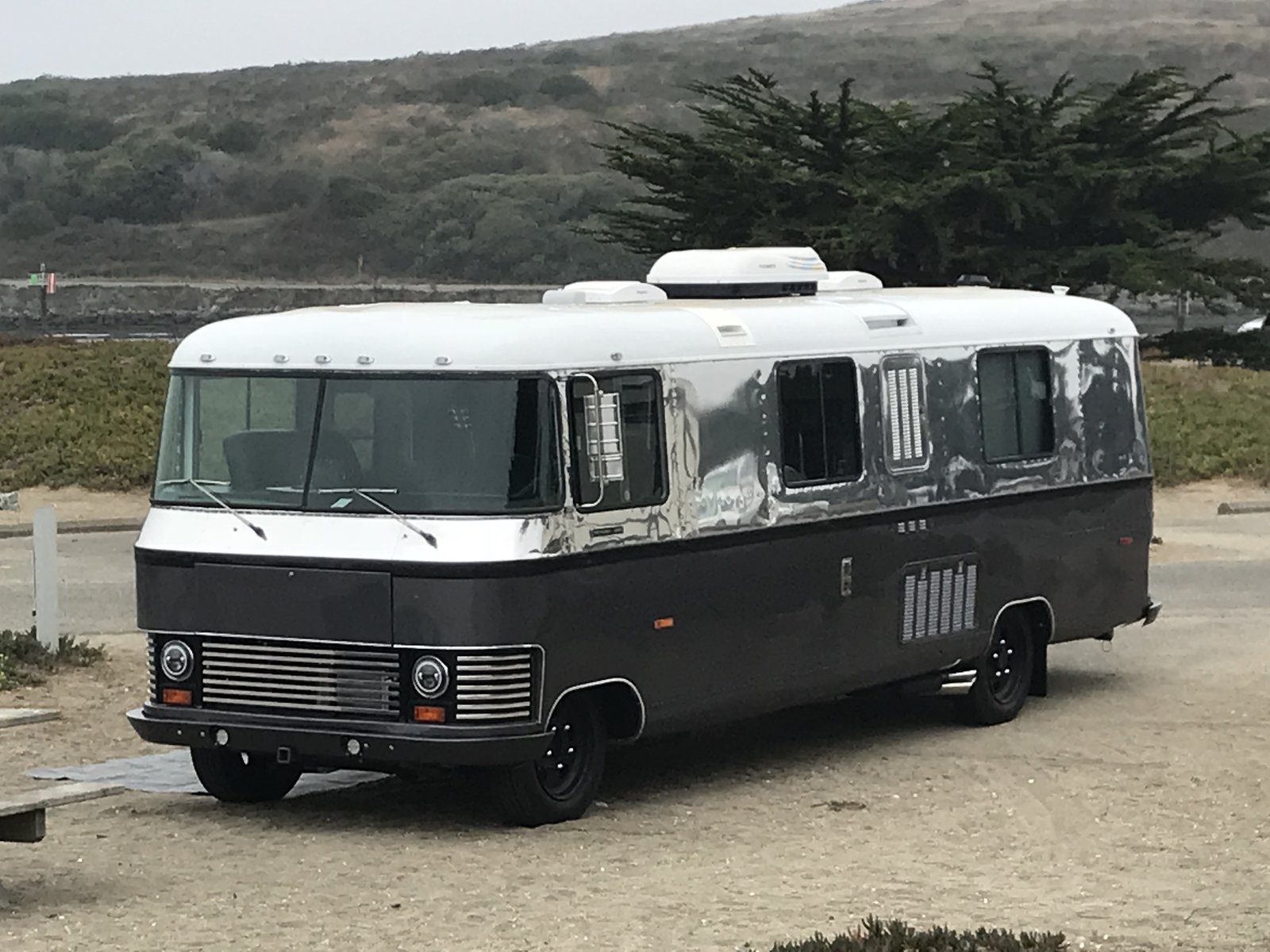 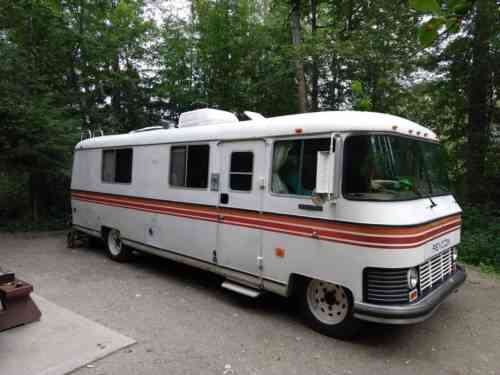 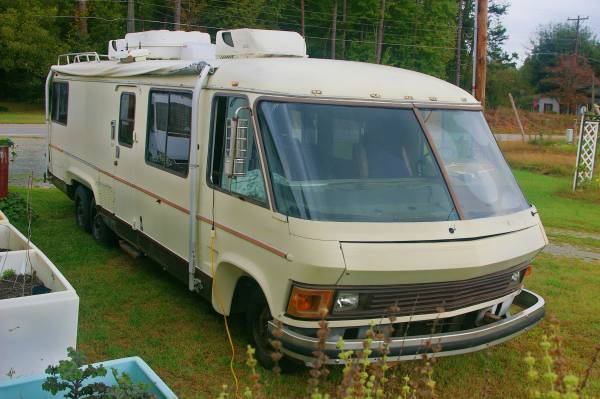 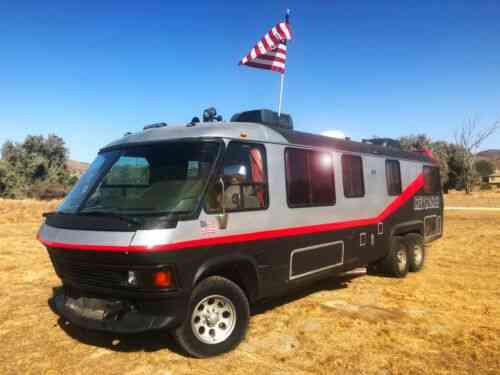 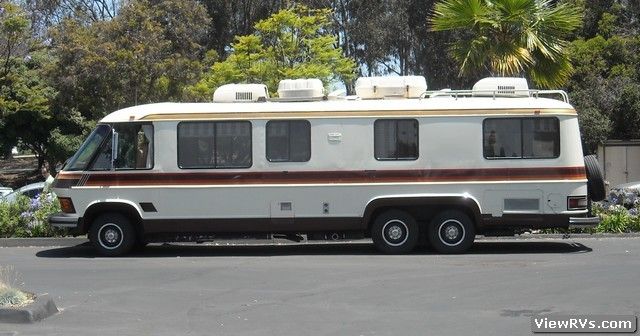 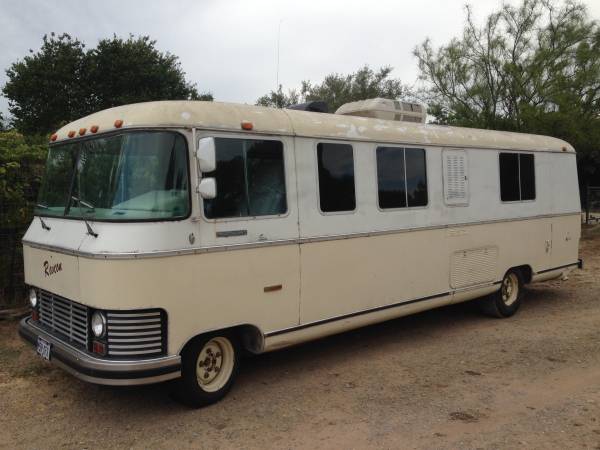 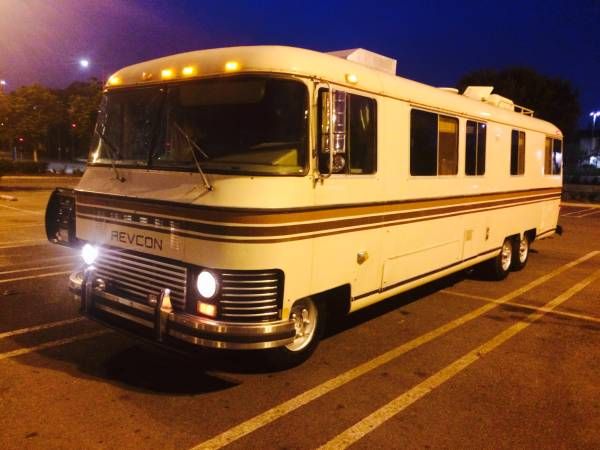 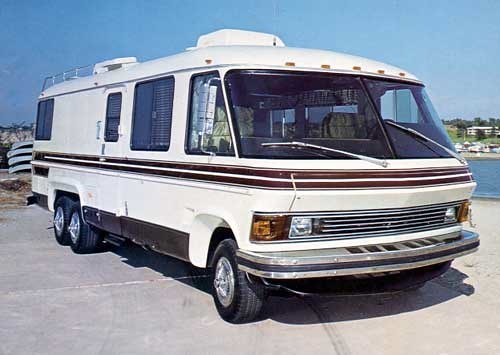 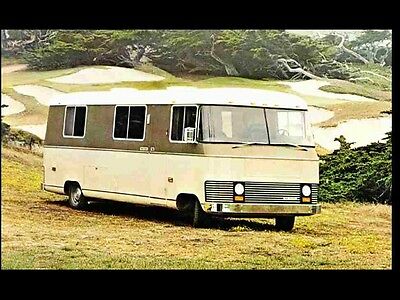 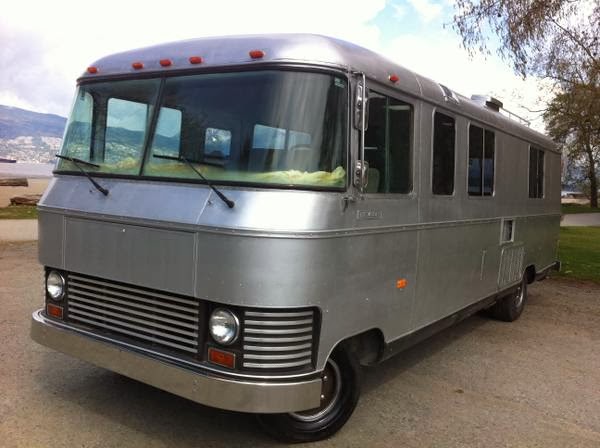 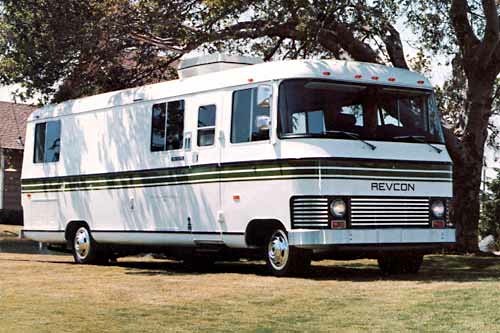 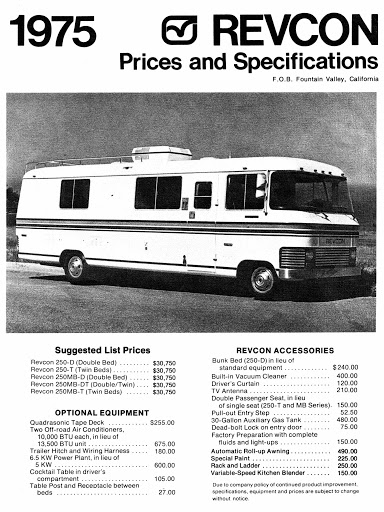 Flatnose Frank is a 1972 RevCon model 250 aluminum motor coach. RevCon was started by John Hall, the stepson of Airstream’s founder, Wally Byam. John’s “Revolutionary Concept” was to add a big Oldsmobile motor and a front-wheel-drive transmission to the iconic aircraft aluminum body. “Frank” is named for the Frankenstein array of American auto manufacturer parts used by RevCon from Olds, AMC, Chevrolet, International Harvester, Dodge and who knows what others.

My wife and I saw Frank’s classic aluminum-and-rivet style hiding beneath his very rough exterior. It was abused by transients and moved around the outskirts of town every 72 hours to avoid being impounded. When it showed up parked a block from my house, I happened upon the owner while I was leaving a note to ask if it was for sale. Surprisingly, he had a clear title. After a couple days of sketchy negotiations, Frank chugged and creaked into my driveway and was ours.

I love restoring cars and my wife loves home design, so this complete renovation seemed like a project made in heaven. Predictably, it was way more work and cost than we really expected. We tackled the project by working between 5 and 7:30 am on the weekdays and on every spare night and weekend.

We love retro modern design so we took that approach with this project. Light, airy, modern, but with classic lines. A bit of auto leather plus “70’s color, patterns and style liven up the interior.

We finished our RevCon project – or at least ticked off the last, original “to do” – in Fall 2018. It took a total of 1200 hours in over a year and a half. The result is a one-of-a-kind accomplishment that will bring us years of enjoyment, adventure, and conversation with family and new friends.

As 2019 rolls in, Frank’s seen about a thousand miles. Look for him and us at vintage RV shows and rallies that we discover throughout West!

Flatnose Frank – 1972 RevCon 250 in the rough. This is after a complete interior gutting and being “cleaned up” for the bodywork estimate.

The paint is incredible – metallic pearl gray changes with the angle and light.

Cabinet building in process. Everything is framed and built from stratch.

Cabinet installation in progress. This crew of brothers from Pride Painting went above and beyond helping with our crazy project. (The temp storage from PODS housed all the cabinetry while the RevCon was in the body shop.)

I discovered this treatment that dates to the 1600’s – cerused wood finish on original teak trim achieved with black dye, shellac and liming wax. All wood trim received this finish.

Adding the “retro” to retrofit on the gauge panel – it’s very old-school aircraft inspired. The center cluster is a custom ABS plastic box I learned how to build with supplies from TAP Plastics (I became a regular).

Finished dash and steering wheel. Aluminum and black is the theme for the cab.

This is the original two-passenger front seat from RevCon, reupholstered to match the leather driver’s seat.

This is the finished main area fully designed by my talented wife.

Bath area refinished. Notice the push-lock latches. I bought these in bulk from China. We saved the original chrome t-paper holder and soap and cup holder (on the left, closed. It revolves open).

Side view. Hot-rod look and sound thanks to custom built 19.5″ wheels from American Specialty Wheels in Kennewick, WA and 3″ exhaust welded up by Luna’s Mufflers in San Jose, CA.

Frank’s home is on the road, near the beach