RAY FRANK FATHER OF THE MOTORHOME

In 1958, Ray Frank, owner of a small trailer manufacturing company in Brown City, Michigan, a small town north of Detroit, on Michigan’s east coast, designed and built a small custom “house car”, as self-propelled RVs had been identified since they were first conceived about 40 years earlier. It was a vehicle that he intended solely for his family’s personal use and enjoyment. He and his family called it their “motor-home”. The coach was unique, at the time, in that it was designed from the ground up to be a motorized recreation vehicle, it was neither a trailer to which additional wheels and an engine were added, as were some of the early model “house cars”, nor was it converted from an existing bus or truck chassis. It was also unique in that it was the first recognized time that the term “motor home” was applied to a motorized RV, thus beginning the transition from the description “house car”, which had been in common use for over 40 years, to the name universally recognized today.

This very first “motor home” proved to be so popular with everyone who saw it on the road or in campgrounds that, after a few travels with his family, and considerable looking for available component suppliers, Ray went directly to the Dodge Division of Chrysler Corporation to investigate the bulk purchase of bare truck chassis on which to produce more of his coaches. Dodge refused to sell its chassis to him directly and referred him to a nearby Dodge truck dealer named Lloyd Bridges with whom he was able to negotiate a contract for his first 100 chassis. “House cars” had been custom made or converted one at a time from other vehicles since the early 1920s but Ray Frank’s new motor homes were also the first motorized recreational vehicles that were built expressly to be distributed through a franchised dealer body. Bridges, in turn, signed on with Frank to become one of his first dealers and the motorized RV dealership that was created by that original order and the ensuing purchase of finished coaches continues today, operated by Mr. Bridges’ sons.

As he got his production of Frank Motor Homes started as a sideline to his trailer business, Ray built 6 units in 1960 and 131 in 1961, when the name was changed from Frank to Dodge Motor Homes. These were, in effect, the first assembly line produced motor homes. For the first 3 years, Frank’s motor home design included a boxy looking aluminum body but with the industry’s first molded fiberglass nose and tail section. In 1963, the universally recognized rounded all-fiberglass body was introduced using a design and renderings created by Ray’s son, Ron Frank, who was only 18 years old at the time but obviously had an eye for style and design. At this time, demand accelerated dramatically and his production quickly increased to over 700 units per year. The new all fiberglass bodied Dodge Motor Homes, which were available in 21 and 27-foot models, took the RV industry by storm. Part of their success was due to the fact that the units were unique enough to be sold not only by established trailer dealers but by franchised car and truck dealers as well. They were also considerably more affordable than the custom units available from most other manufacturers.

Innovative and unusual features in the Dodge Motor Home included a couch that could be converted into a double bunk bed with the back of the couch suspended from the ceiling by heavy straps to form the upper bunk, a double basin, stainless-steel sink, and windshield enclosing drapery for privacy. The demand for the relatively inexpensive motor home continued to grow rapidly with many other manufacturers joining in the production but, by the 1966-67 period, it was still generally accepted that there were more Dodge motor homes registered on the road in the United States than all other brands of motorized RVs combined.

In 1967, Frank Motor Home Corporation was sold to PRF Industries and it became the Travco Division of PRF. From this date on, the coaches were identified as Travco motor homes or as Dodge-Travco motor homes. In 1979, Travco Division was sold by PRF and became a part of Clarence Fore’s Foretravel, Inc., which coincidentally, like Frank’s company, had grown from a single coach privately made and intended for personal use.

Having sold his Dodge Motor Home operation, Frank continued to innovate and improve products in the RV industry. Because he felt that many American consumers wanted a new smaller, more compact motor home that would be easier to drive, easier to park, and comparatively easier to buy, Ray developed the Xplorer brand of van-based motor home. Production of the first Frank Industries “van campers” began in 1968 with a fully self-contained model that would fit in any standard sized residential single garage. This innovation again caught the industry’s imagination and again established Ray Frank as an innovative industry leader with what was the first production “Type B” motorhome.

Having designed his first motor home to be a totally original vehicle from the ground up and neither a modification of an existing truck or conversion of a highway coach, Frank’s design and its overwhelming success set the ground work for the entire “type A” motor home industry of today, as well as lending its identity to an entire, still growing, lifestyle. His production of van-based Mini motorhomes, which at the time had been done only on the German built and underpowered Volkswagen “microbus”, lead to the successful development of an entirely separate portion of today’s RV industry. When his many interior appointment creations are considered in addition to two primary recreational vehicle types, it becomes clear that Ray Frank can truly be identified as the “Father of the Motorhome”.

For his many invaluable contributions to the creation and growth of the modern motor home industry, Ray Frank was inducted into the RV/MH Hall of Fame as a member of the class of 1978.

In 1964, Travco Corporation (contraction of “Travelers Company”) took control, the windows were enlarged and various other cosmetic modifications were added. The mid-1960s Travco was offered in six color combinations. The design changed very little from 1964 to 1980 except for a choice of grille designs that hurt the look of the well-designed RV. Five sizes were offered; the 21-foot 210, 22-foot 220, the 27-foot 270, the 29-foot 290, and the 32-foot 320. Out of the five, the 270 was the best seller, and the best selling color in the 1960s was white with a red band running lengthwise around the center. The popular colors in the 1970s were any shade of earth tone with or without a two-tone. Eventually, the “Atomic Age” design failed to impress most buyers, despite the more modern-looking grille introduced in the mid-1970s. As part of the loan guarantees to the Chrysler Corporation during its financial crisis in the late 1970s, Chrysler was told to abandon the medium duty truck market (including the Dodge Motorhome Chassis) and concentrate on building light trucks; International Harvester was told to do the reverse, and get out of light trucks and concentrate on medium and heavy duty vehicles as part of their agreement with the US federal government. This stopped production of both the very popular Dodge chassis, the 440 ci big-block V8, and contributed to the demise of the Travco, which was identified strongly with the Chrysler Corporation. Other factors, including management changes and extraordinarily high fuel costs and interest rates in the 1979-era contributed to Travco’s difficulties. However, the body shells were used by a luxury-RV maker called Foretravel until around 1990. The Travco body-shell molds have probably been destroyed, so no more replacement body parts will be made. Body molds for some of the mid to late 70s Class A and the Lspirit are listed for sale on the Facebook Dodge Travco Lovers Page. They have pictures and not all of them have been destroyed as previously thought.

Travco motorhomes, regarded as among the very best in the industry in contemporary reports and now considered a classic RV on par with Airstream, Avion, Silver Streak, Sportscoach and Spartan, were owned by both the famous and ordinary families. The country music star Johnny Cash owned and toured in several Travcos (many of which are included in documentaries and films about him) over the course of his career; William Shatner of Star Trek had a specially customized 1979 Travco with four wheel drive. Travco was considered a leader in the industry, and was the first manufacturer to create a vehicle that defined the modern day motorhome. Almost every feature regarded as typical of the class A motorhome originated with Travco and its Dodge Motor Home/Frank motorhome predecessors, from central air conditioning, to self-contained electricity generation, to a toilet (“Destroilet“) that incinerated its own waste.

In a recent survey of all-time highest quality and desirable makes of RV on the RV.net website, Travco models were in the top three postwar RV manufacturers. Even within the Travco company, their product was affectionately referred to as “the tank”—a reflection of its toughness and stout lifetime construction.

Early Travco coach interiors were arguably the most well-made and practical. Upholstery pieces featured simple patterns in durable vinyl. Carpets and interior trim were functional and durable. The mid-70s and the 80s brought twin swivel chairs under a crank-out bunk bed. A dinette table was located across the way, with cabinets above, and the kitchen was fully equipped with not only the expected four-burner range/oven, double-door refrigerator and double sink, but some even came with built-in toasters and coffee pots. Interior fabrics and floor coverings were more ornate. The bathroom was large, and it was fully equipped with marine toilet, sink, and shower. A large closet was across from that. A tiny bedroom with bed, a mirror, and numerous storage areas occupied the rear end of the motorhome.

Over the years, floorplans varied from the luxury 27 foot “Dodge Mahal” in the early 1970s which offered posh comfort intended for just two, to family floor plans sleeping up to ten. The “SightSeer” economy motorhome was a basic, stripped down and shorter model directed at the economy market typified by Winnebago. Sightseer was a conventional box-style motorhome that did not share the distinctive flowing aerodynamic Travco signature body style. 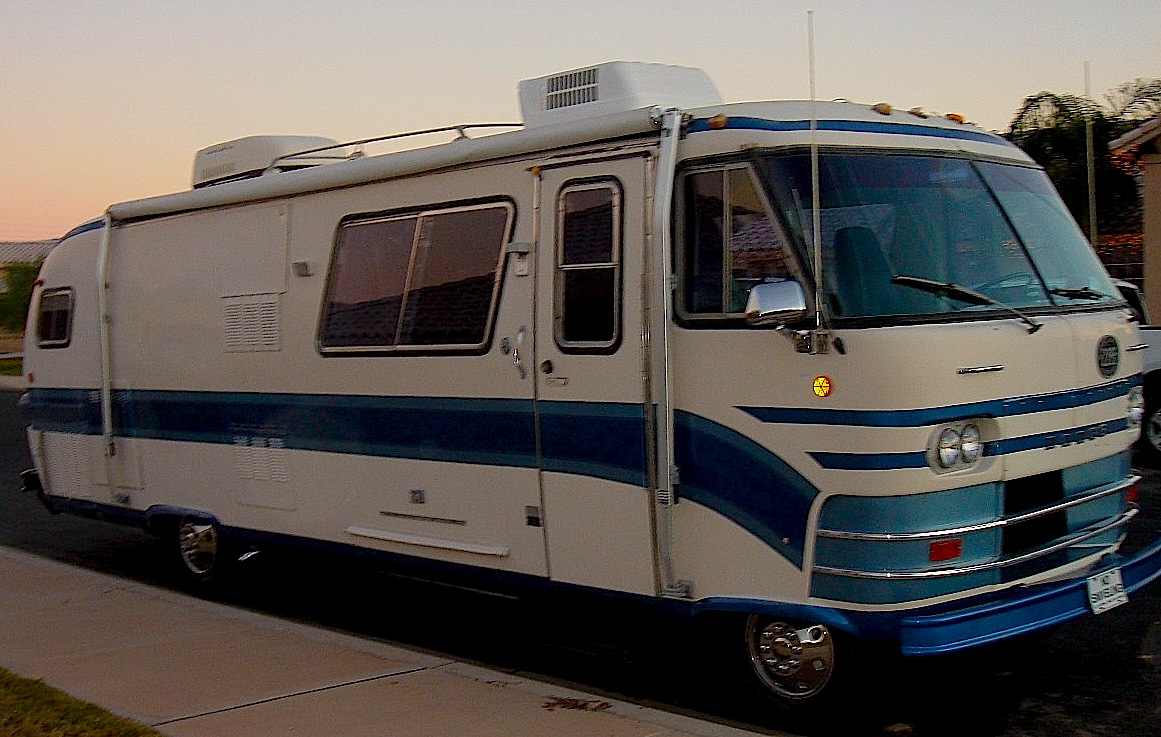 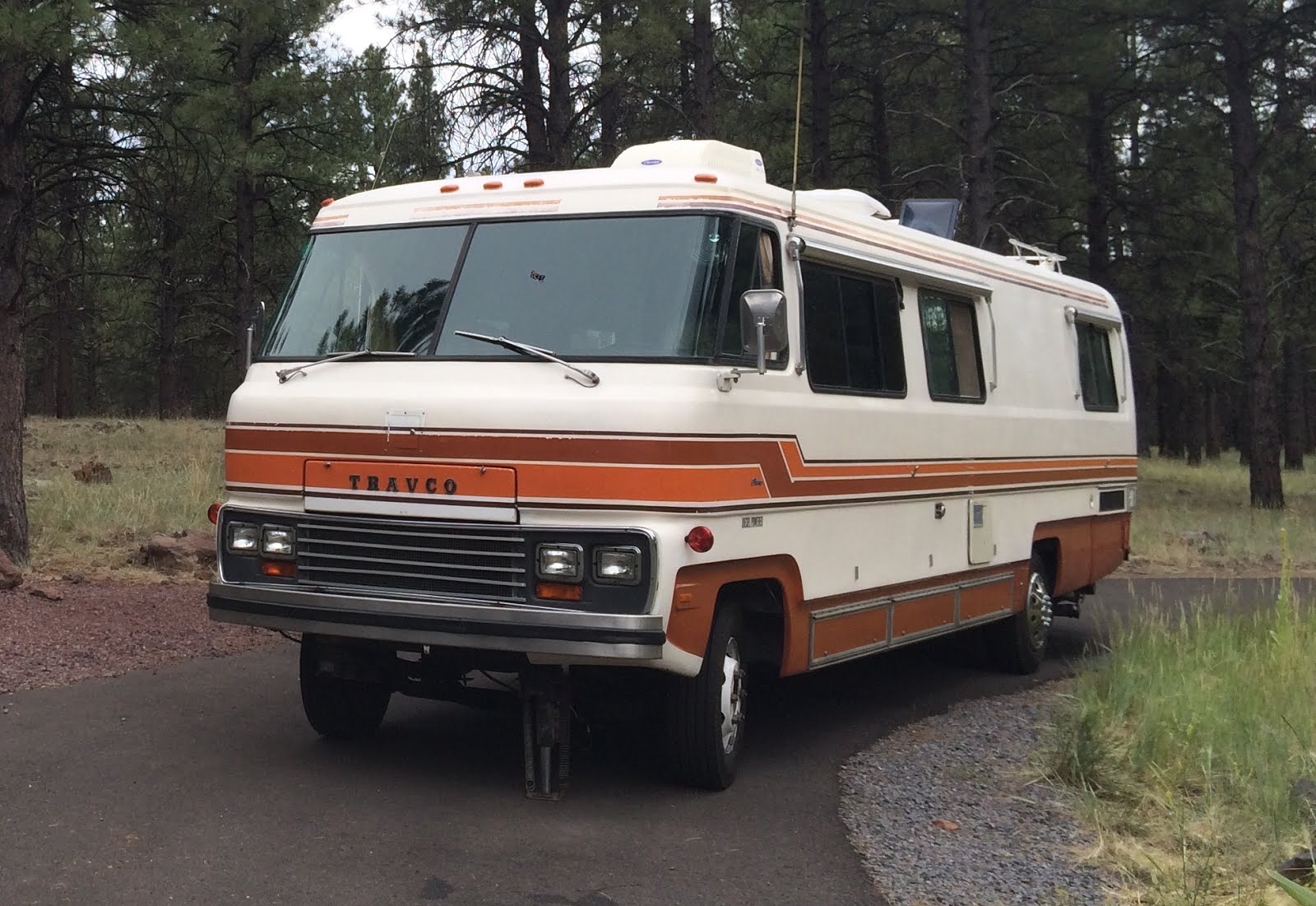 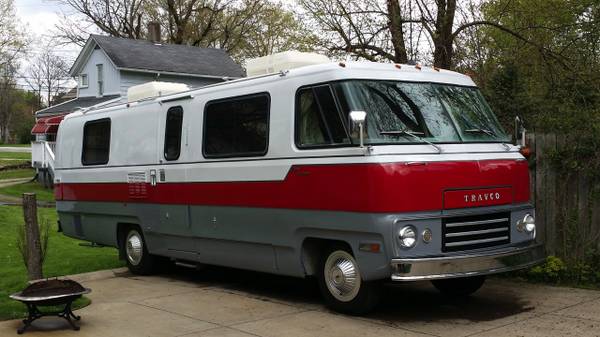 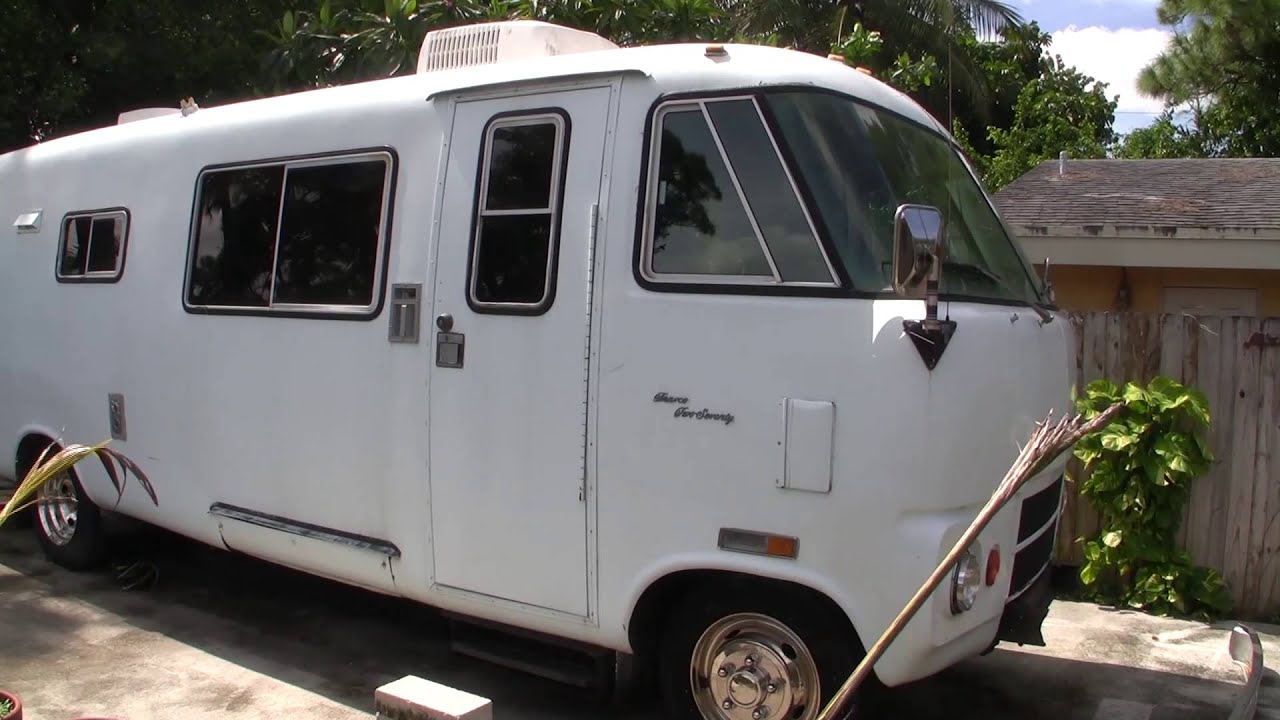 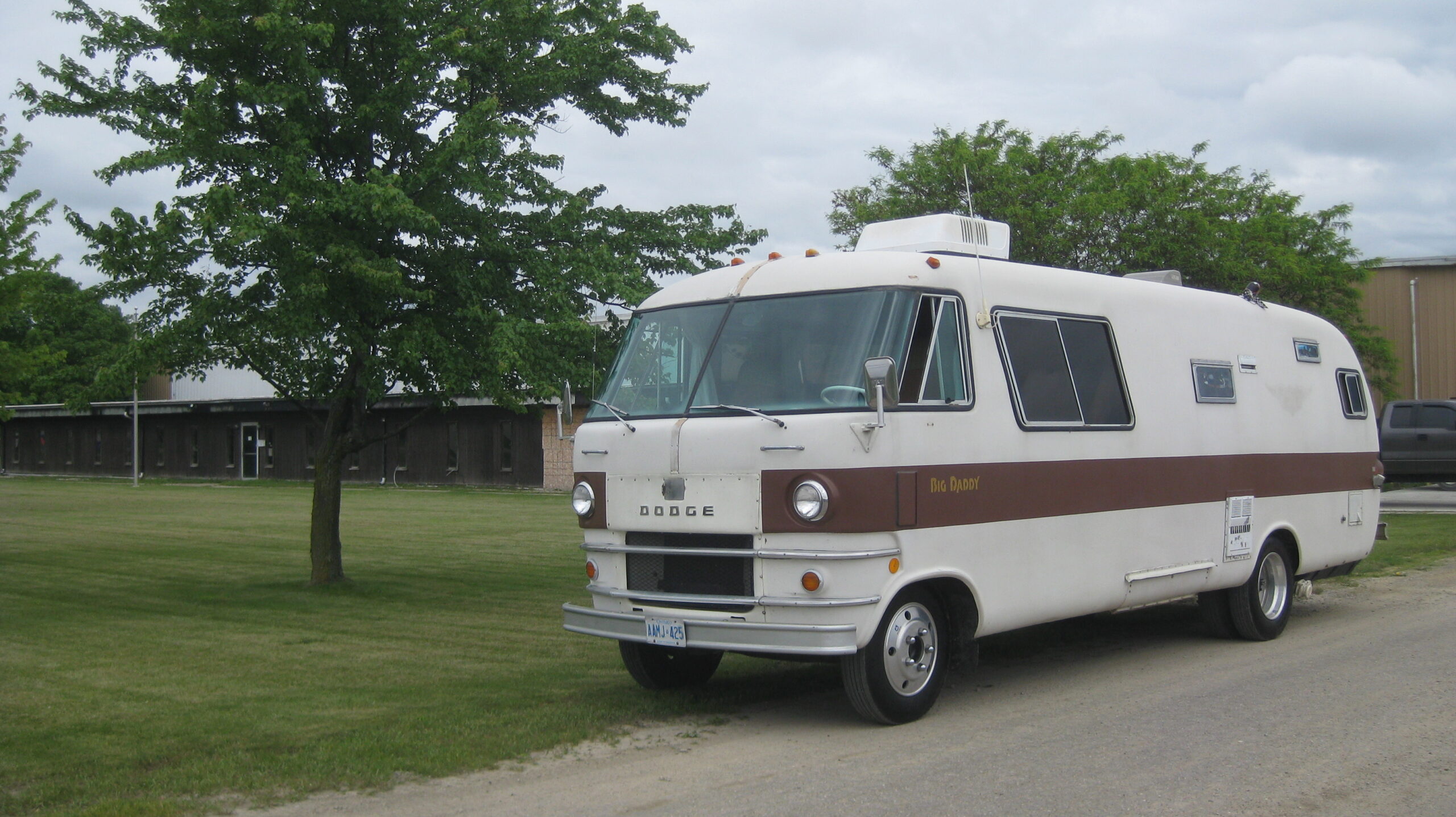 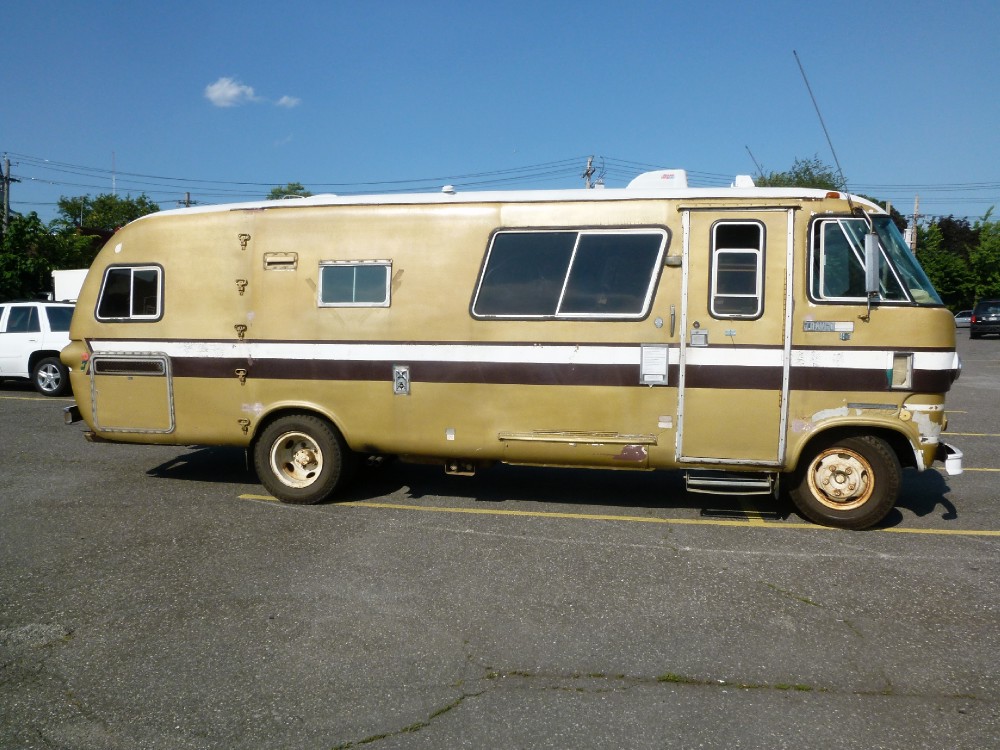 A fourth-season episode of The Donna Reed Show titled “The Caravan” which premiered on May 10, 1962, extensively showcased a 1962 Dodge Travco. As the Stone family travels west on vacation the Travco is shown in a variety of locations on the Columbia Pictures/Screen Gems backlot as well in numerous live action sequences along the Las Vegas strip and at the Riviera (hotel and casino). Throughout the show Donna and the Stone family affectionately refer to the Travco as “our house bus”.

Charles Kuralt and his On the Road crew for CBS News traveled about the country in a motorhome from 1967 to 1994 to come up with unique feature stories that appeared on the CBS Evening News and later on the CBS News Sunday Morning program, also hosted by Kuralt. One of the motorhomes used by the On the Road crew was a Travco.

Mobiles Mansions by Douglas Keister (March 2006) has an informative section on the Frank Motor Home, Dodge, and the Travco.[3]‘

In 2006, BrinkMedia restored two 1968 Travcos to become The Brinkmobiles.[4] They tour the currently to promote BRINK[5] activities. In 2016, the Netflix series ‘Longmire’ features an unknown version of the Travco used for deputy Moretti’s residence<ref> [1]

A forum for Travco owners and those looking to become owners.

Yet another Travco reference site