Hunter Hampton looks up at a blue sky as she sits with her three dogs on the steps outside her home.

This could be a scene from any neighborhood, except for one major difference: Hampton and her neighbors are constantly on the move, a steel caravan rolling across the country on wheels. 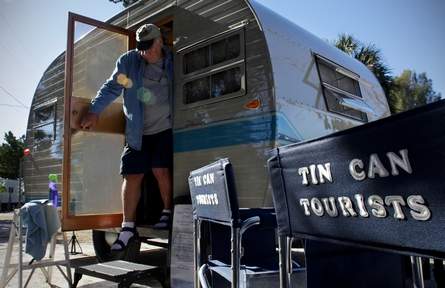 “The house remains the same, but the neighborhood changes,” Hampton said. “That’s the best part.”

Hampton is a member of the Tin Can Tourists, a group of enthusiasts devoted to restoring and showing off vintage recreational vehicles.

On the road to Dade Battlefield National Park in Bushnell, a few of them recently met for a pre-caravan gathering in Cedar Key. Two dozen members have unhitched their campers and settled in for the short stay on this Wednesday afternoon at Sunset Isle RV Park on State Road 24.

Like most Tin Can Tourists, Hampton enjoys driving cross-country to admire and compare old motor coaches and trailers. Although she is currently living in a newer Airstream, Hampton purchased a 1949 Vagabond and said she hopes to restore it for future Tin Can Tourist events. But that doesn’t keep her from coming out and enjoying the gatherings.

Old and new members agree it is the community feel of the Tin Can Tourist club that gives it character. Their passion for vintage trailers is simply an added bonus.

“RVers in general are just a really friendly group of people, but there is something special about the ones that camp out in some of these older rigs,” said Forrest Bone, who is credited with reviving the Tin Can Tourists club.

Established in Desoto Park, in 1919, Tin Can Tourists were minimalists, known for camping on roadsides and heating tin cans of food for dinner, according to Bone. Members had a tin can design soldered on the radiator caps of their vehicles, and the group’s objective was “to unite fraternally all auto campers.”

By the late 1930s, the Tin Can Tourists club had approximately 100,000 members who gathered regularly in Michigan during the summer, but would travel to Florida during the winter, said Bone.

Club membership, however, dwindled during World War II and the economic hardships that followed. By 1982, the club had vanished.

In an attempt to bring back the passion for vintage trailers and motor coaches, Bone and his wife, Jeri, revived the club. Today there are approximately 1,000 registered members.

Most Tin Can Tourists have a permanent home and use their trailers or motor coaches to fraternize with other like-minded enthusiasts while simultaneously touring the nation.

Hampton is one of the few who have turned their trailer into a full-time home.

“It’s a house,” Hampton said. “It just happens to be on wheels.”

Ten years ago, after losing her best friend to cancer, Hampton decided to make the most of her time. At 53, she packed up her things, bought a 1996 Airstream Classic, and hit the road. Her destination: Jackson Hole, Wyo.

Her intention was to travel for only a year. After spending most of her time out west, Hampton turned around and headed back east where she bought a house and farm outside Knoxville, Tenn. She lived in her parked trailer for two months as she remodeled her new home.

With everything finally in place, Hampton settled in. But it didn’t take long for her to realize that something was wrong – living in a house just didn’t feel like home.

“Two weeks later, I knew I had made a mistake,” Hampton said. “I was bored, I was lonesome, I was miserable. So I put the house on the market, sold it, moved back into the trailer and never looked back.”

Nine years later, Hampton’s trailer is adorned – inside and out – with souvenirs and trinkets from her travels.

On her door are tattered stickers in the shape of 48 states – a reminder of where she’s traveled. Alaska and Hawaii are the only states left on her list, although getting to the islands looks problematic.

In the meantime, Hampton has set her course to enjoy life while she can.

“There’s so much to see,” Hampton said. “You can’t see it all in one lifetime. But I’m trying.”