Well basically historically they were all the SAME THING…..simply put….TRAILERS.

Even the industry was unsure if there were any difference, I have seen trailers as short as 16′ called mobile homes and trailers as long as 35′ called travel trailers by their own manufactures. If was a different time back then….ALL trailers were built for road travel, yes some were fitted out more for weekend camping and others were more livable for what we would call today ‘Full Timers’ Doesn’t mean back then or even today that these usages were interchangeable, but just remember vintage trailers were just that…TRAILERS.

Holding tanks had nothing to do with the technical term, no trailer pre mid 50’s had holding tanks, and most from 1955-1960’s still didn’t, even the smaller Shastas, Scotty trailers, etc… Many states in the 50’s and 60’s tried to restrict such large trailers from their roads, that did not stop the trailer industry, many companies built expanding trailers that pulled at a certain length (8′) and then once on location they would almost double in width (15′) a few brands even built trailers that extended in length to combat those states with length laws that restricted pulling anything over 35’…..They pulled as 35′ long but would extend length wise once on site to 40, 45′ or more. By the mid 60’s the industry had finally started to built what we consider manufactured homes (still called mobile homes at that time) that lost their running lights, trailer brakes, etc… and were no where near as ‘mobile’.

There were still a few brands fighting the mobility of Mobile Homes like this early 60’s Frontier Mobile Home Ad that built a 10′ wide (still legal in almost all states at that time, a few just required an easily acquired permit at state lines) but allowed you to fold out two portions of the side giving you a 14’x14′ living room, but it did make for an unusual floor plan! 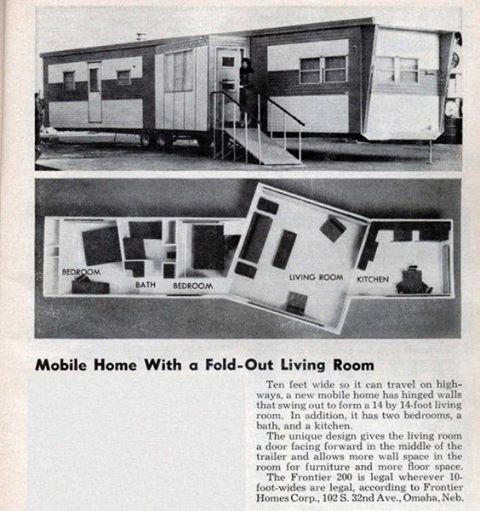