2019 marks the 100 year anniversary of the Tin Can Tourists and we are excited to celebrate this amazing milestone with our 2300 members!

A little background of how and when the Tin Can Tourists Club was born, here is the basics –

The Tin Can Tourists were organized at De Soto Park, Tampa, Florida, in 1919 and received their official state charter a year later. The association formed to coordinate the conventions of the new and expanding practitioners of automobile-camper travel, with their stated objective as, “to unite fraternally all autocampers”. Their guiding principles were clean camps, friendliness among campers, decent behavior and plenty of clean, wholesome entertainment for those in camp. The group known for the soldered tin can on their radiator caps grew rapidly during the twenties and thirties. Members could be inducted by fellow campers through an initiation process that taught the prospective member the secret handshake, sign, and password. After singing the official song “The More We Get Together” the trailerite was an official member of the Tin Can Tourists of the World. an applicant had to be at least 12 years of age and of good moral character; must be living in a tent, car house, car, trailer, or camp (tourist) cottage, on or near the site of a meeting at the time of application for membership was made; and must apply for membership in person. 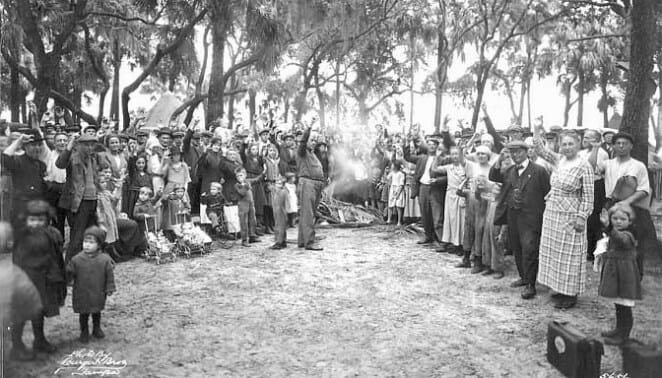 Read a complete history of the club’s found here

So how did we make it to a 100 year anniversary? 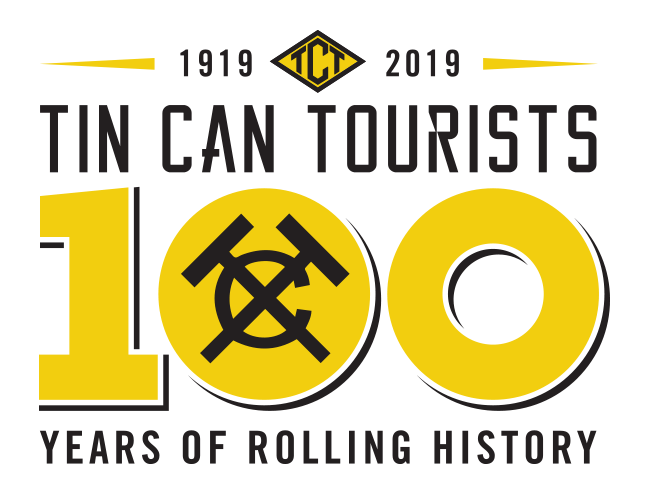 It wasn’t easy! The club virtually vanished in the 1970s but Forrest and Jeri Bone started back up in 1998. In 1998, Forrest and Jeri Bone renewed the club as an all make and model vintage trailer and motor coach club. The renewal gathering was held at Camp Dearborn, Milford, Michigan. Twenty-one rigs attended the May Renewal Gathering. By the end of the year, fifty members were accepted as charter members of the renewed version of the Tin Can Tourists. The group has grown steadily, currently holding Annual Gatherings in Michigan, Florida, and regional rallies at various locations in the US. Recently Regional Representatives have been added to represent England, Japan and France. The new version of Tin Can Tourists is open to all. Its goal is to abide by the original group’s objectives and guiding principles as well as the promotion and preservation of vintage trailers and motor coaches through Gatherings and information exchange.

Plans for the Centennial Anniversary of the Tin Can Tourists

We have planned an amazing set of events, caravans, and unique merchandise available for our members to help us celebrate! The first event is a special one that will include a trip to the place where it all started, Desoto Park!

Upon arrival at Desoto Park, we will enjoy a historical display of the earliest type of campers the Tin Canners used during the TCT’s beginnings. Featured will be Dan Hershberger’s 1927 Auto Kamp Trailer and one of the largest collections of camping equipment and accessories of that era.

Herb and Sidra Spies amazing recreation of the Automobile Telescoping Apartment – Herb wrote: “The amazing thing about this camper was that, like a Swiss army knife, it kept unfolding until it was big enough for two people(that like each other a lot) to sleep in it
and it also had a storage cabinet and an outside kitchen much like a teardrop camper. It was called an “Automobile Telescoping Apartment” and was invented and then patented in August 1916 by Gustav De Bretteville in San Francisco.“

Also, there will be several readings of actual, historical, first-hand experiences written down by Tin Canners during the winter of 1919.
Upon the conclusion of the program and display at Desoto Park, we will travel a short distance to the famous Columbia Restaurant in Ybor City. A sumptuous buffet will fill you before we all enjoy the painstakingly prepared visual presentation on the History of
the Tin Can Tourists by Hunt Jones. His historical accounting of the TCT will certainly impress!