We completed the Wayzalot in 1999 and traveled with our Rolling Home for about three years before we found the Tin Can Tourist Group.   In 1996, when we started our build, there was very little on the internet relating to vintage campers, maybe a couple groups in California. And there was no camping clubs of home made units. I found the Tin Can Tourists on line and called Forrest Bone to see if we could attend as we didn’t have a vintage unit, and he replied, “all are welcome” and that’s the beginning of 13 years of Tin Can Tourist good times, great friends and once in a lifetime caravans and events. 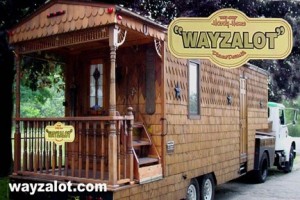 Our first time at Camp Dearborn was Spring 2002. I believe there were about 39 units in attendance.  In the first couple years, we met the Forrest and Jeri and the rest of the Bone Family,(Terry, Michelle, Page and Forrest’s sister who sang at the Sunday services) , Ken and Lana Hindley, John Culp, There are to many to mention, Dan Piper, Henry Wallace, John and Dorothy Flis, Sharon and Doug Cuyler. William and Wilma Svec, Burt and Dot Kalet, Don and Carol Mayton, Norm and Marin Helmkay. All these people were pulling vintage units when it wasn’t the “in” thing to do. We met Doug Keister who photographed  many of our trailers for his book, Ready to Roll in 2002. In 2003, Henry Kimmel appeared at Camp Dearborn and filmed RV Crazy, which has been on TV for over 10 years and made the Tin Can Tourist a house hold name on the Travel Channel.

How to do things, repair and restore vintage units was a always do it yourself and very little information was out there, anywhere, we learned from each other. I found Craig Dorsey on the internet in 2002, but he was in California restoring units. In 2005, Craig Dorsey made his pilgrimage in his restored Glider trailer to the TCT rally . We all got to meet Craig and see the Glider, it was damn cute! And he was able to attend a TCT meet in Michigan.  In 2010, when we started looking for a trailer to use while we built the Wayzless, the Glider came up on EBay in Arizona. We ended up with a road trip and we became the owners of Dorsey’s Glider, which we had seen in person in 2005.  It’s a small world and funny how things happen.  We used the Glider until the Wayzless was done in 2012. Todd Emily has added the Glider to his collection.

I guess I am writing this to express my appreciation to Forrest and Jeri Bone for all the effort they have put into creating the Tin Can Tourists as the great club it is today. They have no idea how far their efforts have reached and how much fun we get out of getting together and doing our show and tell. They will never fully understand how much we each appreciate their efforts and how much anticipation we as adults look forward to with each meet, caravan and show. I say this often but this is the closest thing we, as adult, have in recreating the first day of school, we have been away, cant wait to see our old friends, excited to meet the new kids on the block, and can hardly wait to see the new reveals of all the project, restorations each has brought to reveal to us kids so we can oh and ah over them.  This fall meet, we spent time with the Fiores from Lake Forest, Illinois and we discovered our 1946 International KB6 which we have owned since about 1978, belonged to his grandfather. Mr Fiore bought the International new in 1946  and used it at the tree nursery until the 1970s when he sold it to an employee, who sold it to our friend. They are coming up to see it up close and in person soon. Another small world story. 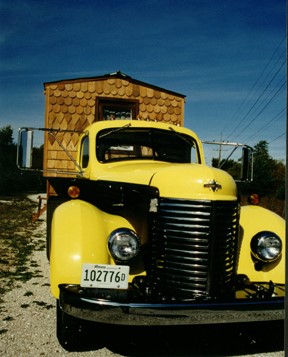 We participated on the National Road Caravan, in 2006, 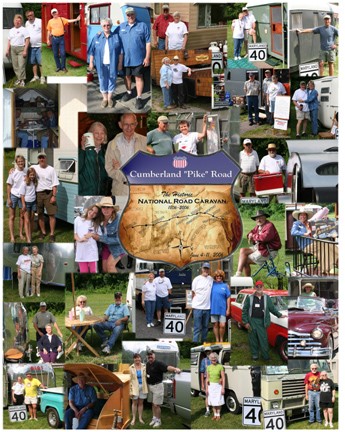 Each has great moments for each of us that never will be again, like the Presidential Police Escort of 12 motorcycles and 6 squads with sirens blaring through downtown Indianapolis escorting 30 vintage TCT campers right through downtown, 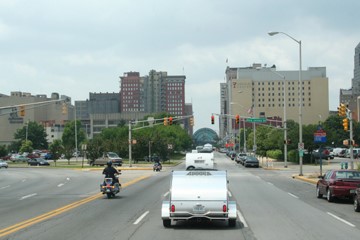 or to be escorted as a caravan over the Mackinac Bridge. We are now becoming the older members and the new younger members will have their own stories to tell.

We had the Piche Wedding which will never be replicated and was probably the best wedding any of us has ever attended. 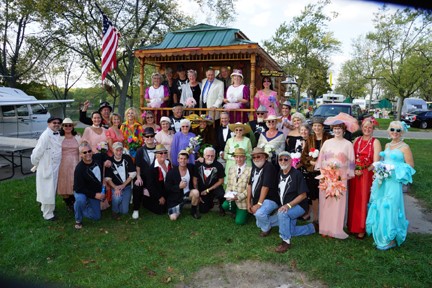 The Hat and Wig party for Cancer Survivors was a great time and special for many of us. And we have John Truitt to photograph and document all of us, Thanks John! 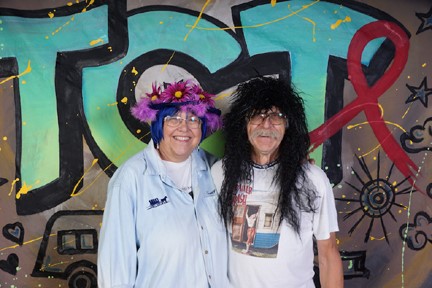 But for Hardy and I,  a very special memory, from our Tin Can Tourist family, was  “The Funeral“…., I have to mention the late night funeral for the Wayzalot in the 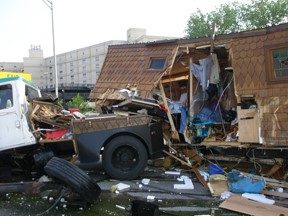 spring of 2010. We were staying in Terry and Michelles Avion as we had totaled the Wayzalot  and the truck the week before in Kentucky. We still attended the TCT rally in Milford as I had magnetic car signs to deliver to the participants for the Route 6 caravan, so we appeared at Camp Dearborn, about 8 days after the biggest accident of our lives with no camper and Hardy with a broken ankle.  The accident was a huge loss of property but no one was hurt and everyone (police, fire, hotel personnel)  involved in this accident left us with only positive memories. So we still attended the TCT meet in Milford.  Terry and Michelle offered their trailer for us to use at Camp Dearborn so we didn’t have to stay at a hotel, and others offered their extra trailers to us to take on the Route 6 trip, if we still wanted to participate. (Really the Tin Canners are a special one of a kind of breed!) Hardy had broken his ankle and Ken Hindley brought an electric cart, and Brian Smithson brought extra batteries so Hardy could tool all around the park. Everyone was so supportive and each wanted to help somehow.  I spoke on Thursday night and told our accident story one time to the Canners so I didn’t have the entire meet taken up with the accident story.             .

On Saturday night about 10pm after the evening activities, Diane Flis knocked on the Avion door and said don’t get undressed, come outside for a minute. We went over to site 48, where we normally park and there were about 75 people at our empty sight, holding candles and a blue grass band was playing music, great music,  May the Circle be Unbroken, I am a man of constant Sorrows and about 5 other songs. Then Forrest gave a little speech about how the Tin Can Tourists will always have a spot for us whenever we returned with a new old trailer. (I had printed new postcards with the Wayzalot  to use on the Route 6 trip, which we now were not going to use….. so Jeri passed out the cards like Mass Cards at “The Funeral“.  At the end of the service, I asked the leader of the Blue Grass Band if he wanted a Mass Card and he asked for two of them. I inquired if he played at many dead camper funerals before and he said this will probably be his first and only.)

I know each of us have our own stories to tell, we have 13 years of stories with the Tin Can Tourists and hope for many more. For 20 years, the Wayzless and the Wayzalot, have opened countless doors to new friends all over the country and we are richer everyday for it. We thank God for all the Blessings he has given us. As Oprah says, if you are a woman born in America you are already one of the luckiest people on earth. We are thankful for Tin Can Tourist family. I am not a mushie person but I am realist and appreciate hard work, my family and friends

For all you new members, participate and create your own special memories…and always say a Thank You to Forrest and Jeri Bone who had the vision but probably never realized how huge this Vintage RV thing has become with the Tin Can Tourist as the flag bearers. 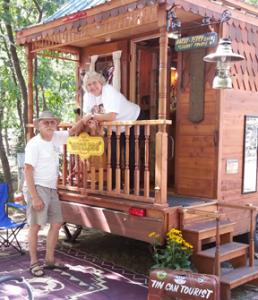